When The Store of Claes Oldenburg opened at 623 East 9th Street, Manhattan, New York City, in 1967, the eponymous artist, who had made The Store by Claes Oldenburg (note the prepositions) just a few blocks away in 1961, of which this was a recreation by the ballsy artist Sturtevant (1924-2014), reacted by cutting off contact with his copyist after attending her vernissage. He “freaked out,” Sturtevant recalls. “And he’d been very much in favour of my work. I said, ‘You can’t do that, Claes! You can’t be for me, and then be against me when I do your store.’” Additionally, Oldenburg’s dealer, Leo Castelli, is said to have felt so perturbed by Sturtevant’s pieces that he bought some purely in order to destroy them.1 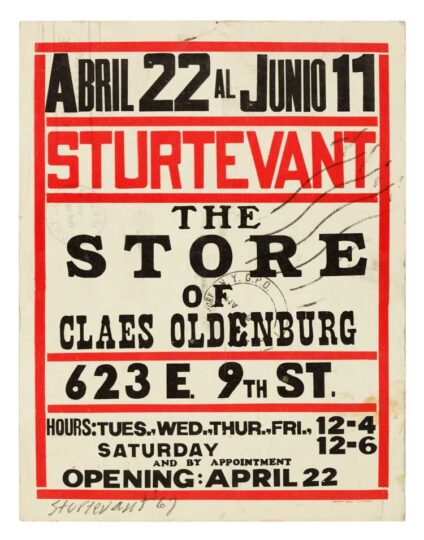 On the 55th anniversary of this art-world fall-out, Thaddaeus Ropac is showcasing 14 of the objects and the advertising poster from Sturtevant’s store, alongside The Dark Threat of Absence (2002), a two-screen video work in which she re-enacts Paul McCarthy’s film Painter (1995).