From the first term, of her first year, on her fine art and art history degree at the University of Leeds, in 1981, Sutapa Biswas (b1962, Santiniketan, India) set out to challenge the Eurocentric, colonialist ideas inherent in the teaching. She was lucky in as much as her personal tutor, Griselda Pollock, took her seriously from the outset and engaged with the motivated student. Biswas had come to the UK at a young age, leaving India because of difficult circumstances arising for her father, a Marxist who had been part of the resistance movement against the British Raj, and she had been brought up to speak up, with the self-confidence to present an argument where needed. 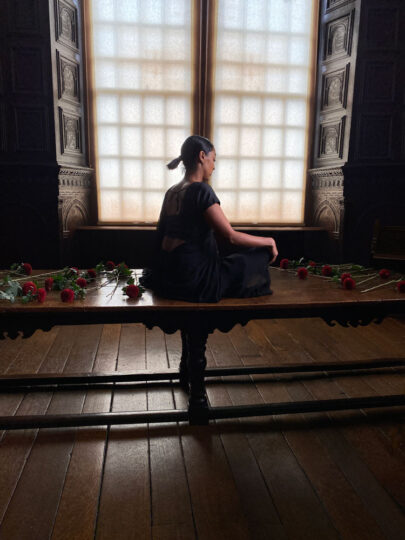 While researching her final-year dissertation, titled Black Women Artists: One Hell of a Big Subject, Biswas interviewed Lubaina Himid and Sonia Boyce, later inviting them to speak at the university. She went on to show work, made while still an undergraduate, in the seminal exhibition, The Thin Black Line, curated by Himid at the ICA, comprising works by a radical generation of young female black and Asian artists. Since then, Biswas has gone on to produce work across various mediums – including painting, performance and film – continuing to poetically explore questions of knowledge and power; race, gender and identity; family, migration and history.

With two major exhibitions forthcoming, at Kettle’s Yard, Cambridge, and Baltic, Gateshead, Biswas has, despite the restrictions of the pandemic, produced a new semi-fictional film, Lumen, which simultaneously retraces her own steps from Bengal to the UK, and the matrilineal journeys of her mother and grandmothers through two episodes of migration and displacement as a consequence of British colonial rule in India.

Biswas spoke to Studio International via email during the run-up to her exhibitions.