Shahzia Sikander (b1969, Lahore, Pakistan) received rigorous training in the traditional practice of miniature painting at the National College of Arts (NCA), Lahore. She first came to fame in the early 90s, challenging and recontextualising this medium’s technical and aesthetic framework and pioneering an experimental approach to the genre, using techniques of serialisation, cutting and pasting, and calligraphy to deconstruct archetypal narratives around femininity, race, memory and migration.

Sikander moved to the US in 1993 to study for an MFA at the Rhode Island School of Design, and, following a residency at Artpace, Houston, in 2001, she began experimenting with video and animation. Most recently she has added sculpture to her mixed-media practice. 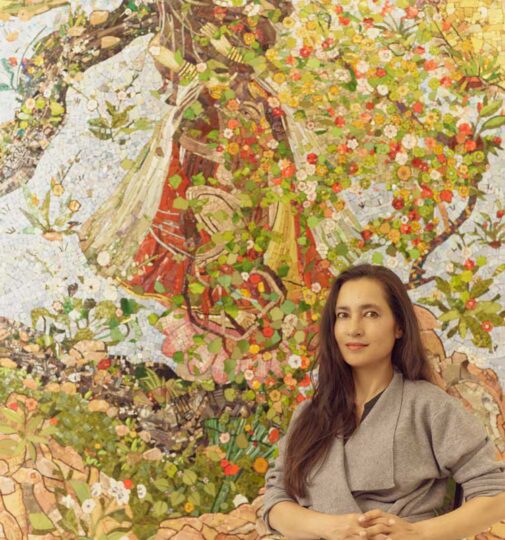 Sikander is opposed to the idea of homogenous and authentic national cultures, believing, instead, that we should understand terms such as “tradition”, “culture” and “identity” as unstable, abstract and evolving. Feminine motifs, alongside the concept of art itself, provide a counterpoint of abundance, renewal and birth to the abuses of extraction, depletion and waste, about which her works so frequently comment. Text – in particular poetry – also forms and important aspect of her work, which she seeks, similarly, to make “sing”.

Sikander lives and works in New York City. She is currently part-way through a major touring retrospective, Extraordinary Realities, in the US; has a solo exhibition, Infinite Woman, at Pilar Corrias, London; and a further solo exhibition, Unbound, at Jesus College, University of Cambridge.

I spoke to Sikander for Studio International via WhatsApp about her multivalent practice.