A process and always in-process: rebuilding the citadel of the self 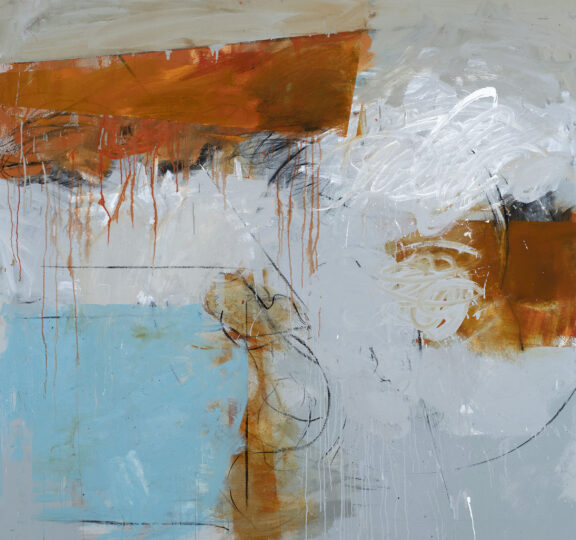 Last summer, Day Bowman visited a number of south-coast seaside towns, where she was repeatedly struck by the dilapidated shapes of abandoned citadel constructions: from castles to martello towers to the pill boxes of the second world war. They echoed the sandcastles of her childhood, growing up in the once fashionable, Edwardian seaside destination of Minehead, Somerset. Although much of her early work was concerned with the figure, after the tragic loss of her baby boy, Sam, and the sudden death of her husband, Michael, Bowman turned back to the ocean for solace, and her mixed-media, abstract paintings have since been largely concerned with the sea, the shore, and, in particular, that ‘edgeland’ where the two meet. With this new series of paintings, she says, she wanted to compare the coast of her childhood to the coast she perceives nowadays – and by this she means both the literal and metaphorical coast, especially in the wake of Brexit – as a barrier through which ‘we do not want to let people in’, the outline of a nation ‘that is pulling up the drawbridge’. More than ever, then, this series seems concerned with loss: loss of childhood; loss of a child; loss of a partner; loss of once solid structures (both physical – the seaside citadels; and metaphorical – the EU, a family unit); loss of identity; and, through the pandemic, loss of freedom, safety and certainty. As author and critic Sue Hubbard writes in her novel, Rainsongs, an elegiac tale about a woman, Martha, who travels to Co Kerry, Ireland – on the mainland, with a view out to the two steep and rocky Skellig Islands – to sort her husband’s things after his sudden death: ‘When there’s nothing left, there’s still the ocean and the sky.’[1] This is a story which resonates uncannily with Bowman’s own experiences, since Martha also lost her son; as a novel, too, it is full of descriptive passages that could be paired perfectly with Bowman’s paintings. To this we shall return…

For as long as she can remember, Bowman has seen the sand as her canvas, and her canvas as the sand. Again, this brings with it a sense of loss, since nothing built or drawn on the beach survives the destruction of the indiscriminatory incoming tide. In this way, Bowman, with her ‘image of a great wave washing over the world,’[2] conjures up the cosmological thesis of Thales of Miletus (a pre-Socratic philosopher – deemed by Aristotle to be the first philosopher in the Greek tradition), which holds that the nature of all matter is a single material substance: namely, water. For Bowman, too, water is about ‘birth, healing and regeneration’.[3] As she layers up her palimpsestic works, it is frequently an icy cold blue of water that is laid down first, along with golden sand and white spume, before she starts to work more graphically, drawing, as the surrealists would have it, automatically, without, or, perhaps better said, pre-thought, and certainly pre-linguistically, albeit with the marks frequently resembling some ancient form of calligraphy. As artist and writer Deanna Petherbridge asserts: ‘Drawing needs to be reaffirmed as intelligent practice, which is as much about thinking, seeing and interrogating as inventing and which communicates as intensely with others as it refers to the affective self’.[4]

Another novel close to Bowman’s heart, especially in relation to the loss and longing of this series, is Virginia Woolf’s To the Lighthouse, and this evocative passage could just as easily speak of a Bowman canvas:

‘First, the pulse of colour flooded the bay with blue, and the heart expanded with it and the body swam, only the next instant to be checked and chilled by the prickly blackness on the ruffled waves. Then, up behind the great black rock, almost everything spurted irregularly, so that one had to watch for it and it was a delight when it came, a fountain of white water; and then, while one waited for that, one watched, on the pale semi-circular beach, wave after wave shedding again and again smoothly a film of mother-of-pearl.’[5]

Circles – complete or otherwise – are the primary form of Bowman’s graphism and comprise a universal symbol with extensive meaning, ranging from notions of wholeness, perfection and timelessness, to the infinite and God. And yet Bowman’s marks go far beyond surface symbolism. She describes ‘working quickly, moving one to another, allowing a sense of play and random mark-making to tell the story’. This enables the process to defer concerns with outcomes and to allow for emergent, experimental image-making. ‘Through the use of oil paint, charcoal and conte, scribbles and erasures are a constant, and inevitably there is a discrepancy between the originating concept and emergent outcome.’ As Lambirth puts it, Bowman is ‘more involved with process than product,’[6] a practice artist Terry Rosenberg refers to as ‘ideational drawing’, which, he further defines as ‘a process and always in-process; thinking-in-action and action-as-thinking’.[7] It is, he continues, ‘a thinking space – not a space in which thought is represented but rather a space where thinking is presenced’.[8] This is echoed by the way in which Bowman’s ‘somewhat hectic sense of immediacy’ simultaneously carries with it ‘a dynamic of presence and presentness…’[9] and, again, in Rainsongs, by Martha’s response to Colm’s poetry: ‘When you describe the bleak moorland, the cliffs and bogs, you don’t, like Yeats, appear to be creating symbols but more like [the Victorian poet Gerard Manley] Hopkins to be revealing the essence of things’.[10] So, too, Bowman’s works are like a subconscious exploration of semiotics, revealing buried meaning and inner thought. ‘To relive the past we start with a few known facts,’ thinks Martha. ‘Then add texture and colour, so that like a child’s dot-to-dot drawing we arrive, if we’re lucky, at an approximate outline. Though often it’s not quite what we expect.’[11]

And what to expect, indeed, as we stand on the edge, unable to go back to what is lost, but with no idea what the new, unexpected, un-planned-for future – or, in pandemic speak, ‘the new normal’ – should look like. Bowman recalls, often, as a child, standing at the water’s edge, and feeling she was standing at the edge of her world. A note left behind by Brendan, Martha’s deceased husband, describes the Skelligs as: ‘Not just on the edge of a continent, but on the edge of human imagination,’[12] while Martha reflects that: ‘The wild […] stripped everything away so that all that was left was an essential self’.[13] Just as the citadels, taken by Bowman as her starting point for these works, have eroded over time, so our essential self, stripped bare by this literal and metaphorical ‘standing on the edge’ and being weathered, might be understood to be our own citadel – our incarnate defensive core. As artist Tania Kovats puts it, in the publication to go with another exhibition in which Bowman took part: ‘A sense of place is a route to access a sense of self’.[14] And so it is that by touching the void and returning to find a grounded sense of place, we are able to incorporate loss, of all and any kind, into our lives and continue to move forward, rebuilding our damaged bastion – ‘a process and always in-process’.