Jean David Nkot (b1989, Douala, Cameroon) has been working with AFIKARIS Gallery – dedicated to promoting artists from Africa and its diaspora – since it began as a virtual platform in 2018. Now, his first major solo show in France is the inaugural show in the gallery’s new Parisian space. Nkot knows the French capital from his time there on a master’s course, following his undergraduate studies in Cameroon, to where he later returned and remains to this day. 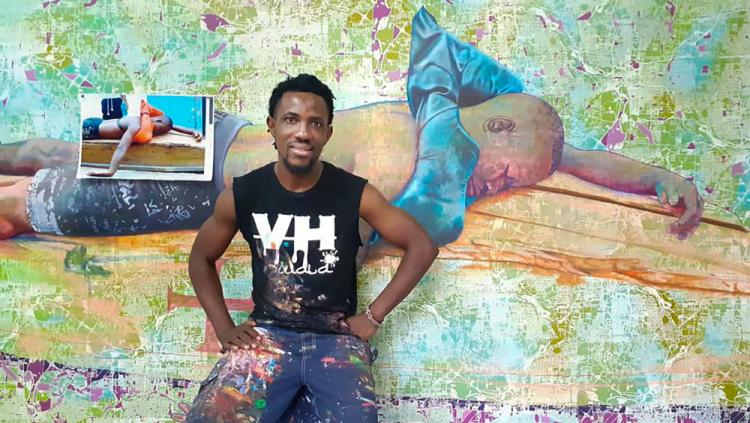 Concerned with the human condition, Nkot works with layers to build up meaning in his mixed-media paintings, telling the story of the subject depicted as well as the wider narrative of the place in which they live – although sometimes, out of necessity, he allows a native of one country to take on and “tell” the story of another. Currently preoccupied with the mismanagement of raw materials and the mining industry in Africa, Nkot seeks to show the strength and resilience of the people he portrays, not just their suffering.

Inspired by the maps of the Swiss artist Thomas Hirschhorn, Nkot builds up layers of terrain, portraiture and data or symbols – his so-called “molecule maps” – to create his complex and deeply fascinating finished works. In the run up to his exhibition, Nkot spoke to Studio International via email about the ideas behind each layer, how his practice has developed, and what he hopes to provoke as an audience response.