Toby Deveson: embracing the most sacred depths of souls

Toby Deveson: embracing the most sacred depths of souls

Dance as the narration of a magical story; that recites on lips, illuminates imaginations and embraces the most sacred depths of souls. [Shah Asad Rizvi]

Before becoming a photographer, Toby Deveson wrote music. ‘Avant garde, atonal and arrhythmic’ is how he describes it. ‘Jarring and jolting.’ Even his use of alliterative adjectives – whether intentional or not – has a sense of the lyrical, and, born and largely brought up in Italy, he is certainly a passionate Romantic, in the true sense of the word (originating from a Romance country). Although his photographic journey began as one of documentary, his preferred genre these days is landscape: always black-and-white, always analogue, always full-frame negative. Deveson, in part, still approaches these images as if they were documentary, however: he seeks to capture not a story, per se – that, he says, would be too simple – rather the emotions of the place and the moment, that je ne sais quoi which will provoke a reaction and, he hopes, move the viewer to tears. 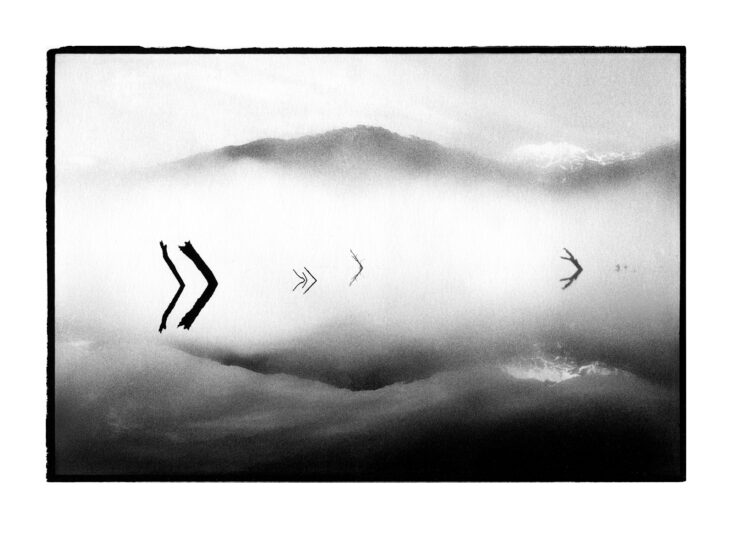 Deveson’s photographic compositions are infused with his talent for musical composition, and his approach, too, is similar. He speaks of finding the geometric pattern in the viewfinder, abstracted to the point where you almost don’t see what it is; you don’t see the textures or the shape, you just see the overall jigsaw. As Henri Cartier-Bresson said: ‘Thinking should be done before and after, not during photographing,’ and Deveson, likewise, describes building a foundation – a solid and stable structure with science, knowledge and experience – on which to then let his instinct loose to do something ‘nebulous and creative’, to dance as the narration of a magical story.

Musician Brian Eno uses the metaphor of gardening for his compositional process: ‘The gardener takes his seeds and scatters them, knowing what he is planting but not quite what will grow where and when’. Deveson, similarly, admits to not necessarily knowing why he pours a certain chemical where and when he does, why the result is as it is, or why it looks good (or not!) – he simply learned what he needed to know through time and habit – he is largely self-taught – and follows his intuition.

But his compositional process is not a solo dance, it is a pas de deux with a quite extraordinary and demanding partner – Mother Nature. Nevertheless, Deveson takes the leading role – after all, as Ansel Adams made clear, ‘you don’t take a photograph, you make it’. ‘You’re having to let what’s in front of you into the camera, but also put yourself into the camera from behind,’ says Deveson, who sees the process as a two-way conversation – indeed, a dance, or the intimate – and often intricate – choreography of a relationship. ‘It’s exhilarating,’ he adds. ‘A relationship infused with wonder and awe, passion and fear. A relationship with an undercurrent of playfulness and power and a constant sense of potential danger.’ As in any union, it’s a case of holding one’s own shape, while respecting that of the other – meeting midway, caressing, moulding a little to each other’s form, becoming a ‘we’, but ultimately remaining two ‘I’s. Deveson speaks of the immense challenge of placing his style and emotions on to something as vast and imposing as Mother Nature: ‘To not be engulfed by her, and to not rely on her to provide you with a stunning image, but to work with her and create something unique from something so universal’.

To this end, Deveson travels widely, frequently driving for hours at a time, a vague plan half hatched, his route being steered, nevertheless, by his wayward dance partner. He seeks to experience as much of her as he can, to celebrate her gifts, to rise to her challenges, to capture that elusive moment in their relationship when everything changes, when something is learned and can never again be unknown. As with most significant realisations, these often only come later, when he returns to his darkroom and exposes the fragments of a partially recollected dream, reliving them all the more vividly for their bright monochrome. The dream as a whole, however, can never be fully resuscitated, leaving Deveson – and, in turn, his viewer – with the narration of a magical story, weaving in the unique stance of the present, and that of the individual’s past. Cartier-Bresson coined his famous term ‘the decisive moment’ to describe the fact that ‘photography is the simultaneous recognition, in a fraction of a second, of the significance of an event as well as of a precise organisation of forms which give that event its proper expression’. Just as no two performances of a given dance will ever be identical, the event itself is necessarily ephemeral, but the image Deveson makes represents the essence thereof, recites on lips, illuminates imaginations and embraces the most sacred depths of souls.