Paul Mpagi Sepuya (b1982, California) began his photographic career taking straightforward portraits. Even today, a decade and a half later, he believes the basis of his work remains the traditional studio portrait, which he always takes of friends and people he knows; occasionally also of himself. His presence in the image, which is often overemphasised in curatorial selections, is very much secondary, however, with the key focus being on the camera itself, and the act of photography. By placing the camera or tripod at the centre of the composition, and using mirrors, frequently tainted with smudges and smears, so as to make evident their presence, he deconstructs the process, as well, frequently, as the resultant image, which is cut into fragments, later to reappear in other works. Although the images themselves are now taken digitally – purely as a means of expediency – Mpagi Sepuya does no digital manipulation of his works whatsoever. Everything that appears in the shot is actually there in his studio. 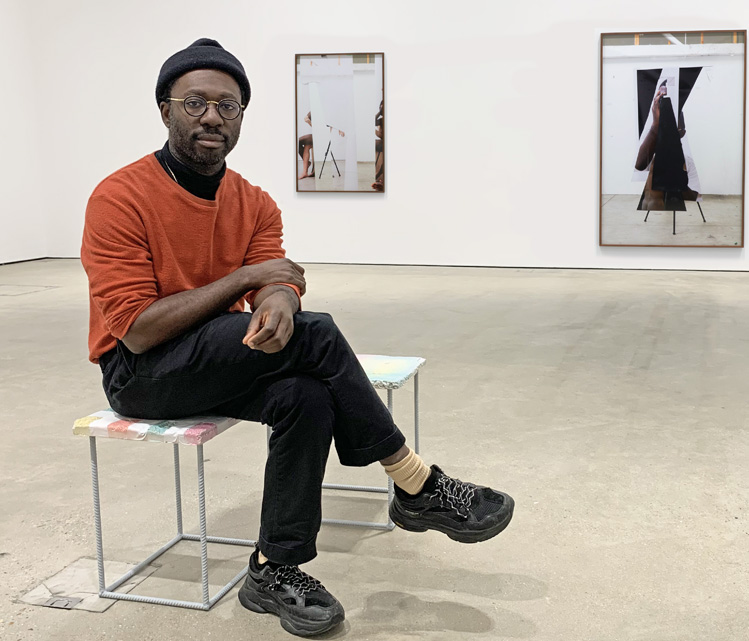 While Mpagi Sepuya’s work has often been described as being about queer identity, this is, again, secondary to the camera itself. Here he explains how, although black and queer experiences are clearly conditions that lead to the space that makes the work possible, it is these conditions themselves that interest him more than making any overt declarations about gender, sexuality or race. The compositions are not planned but arise out of his living with the material until it finds its way into an image. While there are myriad layers to his works, and, in fact, to the layperson, they might seem incredibly complex, Mpagi Sepuya maintains they are little more complicated than a selfie, shot by a teenager in a bathroom mirror.

I spoke to Mpagi Sepuya for Studio International ahead of the opening of his first solo UK exhibition, taking place at Modern Art, Vyner Street, as part of CONDO. Watch the interview here.