One of the two inaugural exhibitions at the former coal power station in Luckenwalde, a small town in the middle of the East German state of Brandenburg, is an expanded work, Electric Blue, by the British artist Lucy Joyce. It began as a flagpole commission (something the co-director Helen Turner – former senior curator at Cass Sculpture Foundation, near Chichester – would like to run annually), and grew to include an exhibition of drawings relating to the power station, the town, and their history, and a live “Aktion” on the opening day. The latter involved seven performers hoisting seven-foot mirrored arrows above their heads on the rooftops of the building, containers and parked vehicles, muttering the words: “Hope is not enough.” The seven performers represented seven Luckenwalde inhabitants Joyce had worked with in a research capacity during her residency in the run up to E-Werk’s opening. These ranged from Herr Schmidl, a former senior employee of the power station, to Turner herself. Miniature 3D-printed figurines of these seven characters also stand above the door to the gallery in which Joyce’s work is displayed. They will, she hopes, remain displayed somewhere in the new arts centre, long beyond the period of her residency and exhibition – a reminder of all those who made the project possible. 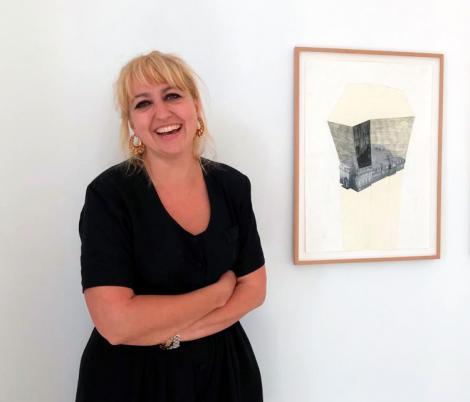 Joyce’s work is always multilayered, typically creating an interface between passersby and the cultural institution, or inviting people who are unfamiliar with contemporary art to discover points of access. For Turner, therefore, Joyce was the natural choice, because, as she explains: “I was really resistant to making this an isolated contemporary institution. I didn’t want it to just have the Berlin art crowd coming here, or even the international crowd; I wanted it to be a place that the locals felt welcome to come to as well and I knew Lucy would produce a really sensitive, generous commission in this regard.”

Studio International spoke to Joyce about her residency and project on the opening day of E-Werk – just ahead of her Aktion.