Review of Renoir Father and Son: Painting and Cinema at Musée d’Orsay, Paris

Walking into the side galleries in the impressive Musée d’Orsay, Paris, on a wet and windy late-autumn day, there is suddenly the feeling of spring – a girl laughs as she gaily swings back and forth, and a young couple promenade, doe-eyed, enjoying the first throes of young love. In black and white, these scenes play out on a loop on a large screen – extracts from some of the best-known and best-loved early films by the French film director Jean Renoir (1894-1979), while, on the surrounding walls, colour luminesces, as the same – or very similar – scenes are frozen, like screen grabs, on the canvases of his father, Pierre-Auguste Renoir (1841-1919), the impressionist painter. 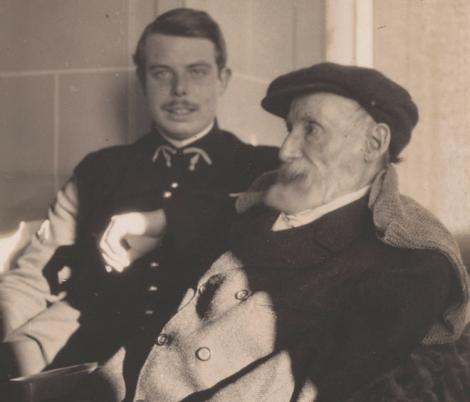 And so it goes on for the duration of the exhibition, which fills the galleries along the length of the first floor of the museum: Renoir-father and Renoir-son interspersed and in conversation – repeated motifs, repeated scenery, repeated models. The idea is not to place Jean in his father’s shadow, but to explore the extent to which his father’s legacy, and their close relationship, with Jean’s intimate understanding of his father’s painting process, influenced his directing career – either in terms of deliberately paying homage to, or deliberately seeking to move away from, such ascendancy. As Jean said towards the end of his career: “I have spent my life trying to determine the extent of the influence of my father upon me,” going on to describe his ambivalence and the periods “when I did my utmost to escape from it to dwell upon those when my mind was filled with the precepts I thought I had gleaned from him”.