Jodie Carey is interested in ideas
of ageing, memory, time passing and the shadowy boundary between forgetting and
remembering, and her monumental sculptures and installations have been
influenced by such genres as still life and vanitas. She originally studied textiles,
before switching to fine art and attending Goldsmiths and the Royal College of
Art, and traces of her own path are evident in her painstaking and
labour-intensive artworks. Since having her first baby in 2016, and returning
to her studio three weeks later, she has moved away from her more decorative
and ornamental earlier works and begun to strip back her work and make it more subtle. 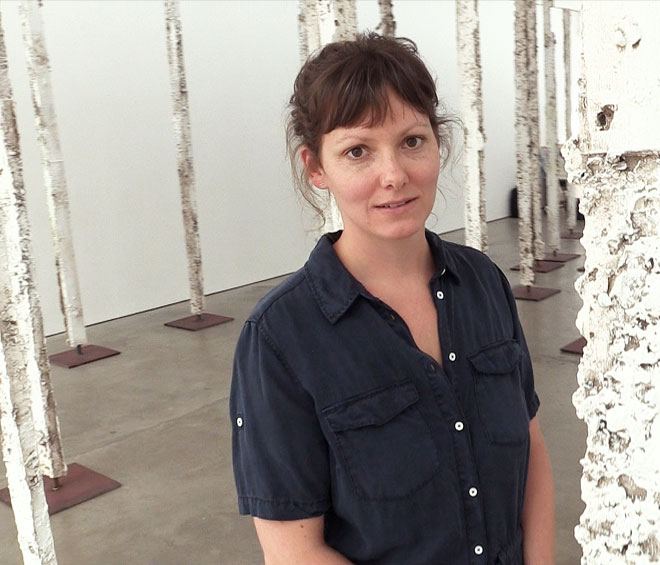 Carey, whose works develop through
the process of making, describes her art not as a job but as an extension of
who she is. She prefers more traditional and “simpler” processes, such as
carving, weaving and drawing directly on to walls, eschewing anything heavily
fabricated. She juxtaposes materials and scale, questioning the nature of the
monument and exploring how something transient and fragile might also be quite
monumental in its own right.

Carey invited Studio International
to her south London studio while she was making works for her new installation,
Earthcasts, at Edel Assanti, London. Burying lengths of salvaged timber in the
ground, she created rudimentary moulds, into which she then poured plaster. The
resulting sculptures, which she worked into by hand, sometimes adding a lick of
white paint or a shade of coloured pencil, are of a human-scale and could equally
be age-worn human figures or gnarled tree trunks – again, the human and the
natural is a juxtaposition Carey enjoys exploiting. There is a material
roughness to her pieces, which she describes as “very physical objects”.