Essay: ‘The end is where we start from’. Laura Moreton-Griffith’s history painting of the future

‘The end is where we start from’: Laura
Moreton-Griffith’s history painting of the future

In a series
of lectures delivered at the University of New Brunswick in 1950, professor of
political economy Harold Innis decried the ever-increasing loss
of respect for the past and the future. This ‘present-mindedness’, as he termed
it, was, to his mind, a symptom of capitalism, which had fostered the
measurement of time, facilitating the use of credit and the rise of
exchange-based calculations of futures that were deemed predictable and
insurable. In his 2016 essay, ‘A New Politics of Time’[1], Professor
John Keane similarly discusses the ‘myopia of democracy’, ‘encouraging a fixation
on the here and now […], discriminat[ing] against younger generations [b]y
allocating health care resources for the elderly and financing social insurance
schemes out of current taxes […],turning a blind eye to long-term environmental
degradation and […] the risks associated with bio-genetic engineering and
burgeoning population growth’. These beliefs, Keane adds, are all ‘egged on’ by
claims that we are facing ‘the end of history’ (as proposed by the American
political scientist and economist Francis Fukuyama in his 1989 essay of the
same name [2]) and
the arrogant conceit that we have solved all the problems of the past. 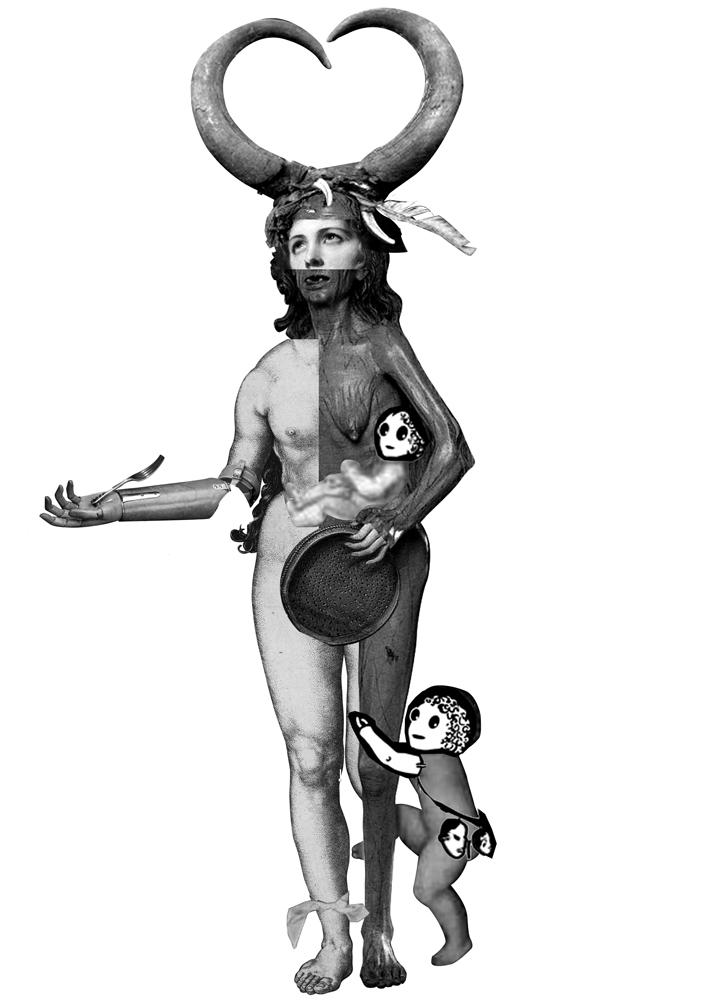 The idea of
a politics of time plays a key role in Laura Moreton-Griffiths’ dystopian
installation, Truth Lies Within
(2017). A ‘three-dimensional history painting’, it entraps and entwines the
viewer in the act of storytelling, implicating her in the denouement of its
disturbing plot. Walking amidst the ensemble of characters, she takes on a
participatory role, bearing the burden and the guilt of every false decision. It
might be described as a postmodern, post-truth, post-whatever-you-like scenario,
but this would, in fact, be a misnomer, since the real key to Moreton-Griffiths’
work is the fact that it stands outside of time, or, at least, outside of the
linear model of time on which modern – western – history is predicated. Instead
Moreton-Griffiths employs the concept of non-linear, cyclic time, and weaves
the elements of her work together as an author might weave a work of
speculative fiction.

The term ‘history
painting’ was introduced in the 17th century to describe
paintings with subject matter drawn from classical history, mythology
and the Bible. Derived from the wider sense of the Latin word historia, it essentially means ‘story
painting’ and is a genre defined by its subject matter rather than any specific
artistic style. In the 18th century, the term began to be used to refer to more
recent historical subjects, usually depicting a moment in a narrative story,
rather than a static subject. Typically a history painting would be large
scale, made as a propaganda piece for those in power to represent and demonstrate
the effect(-iveness) of their regime. For Moreton-Griffiths, however, history
becomes the future – and a future which, discordant and undesirable as it
seems, ‘could’, as Margaret Atwood says of her own works of speculative
fiction, ‘really happen’. The social structures and power relations necessary
are all already in place; they are all already (mis/dys)-functioning – the
artist merely mirrors and exaggerates what she knows. 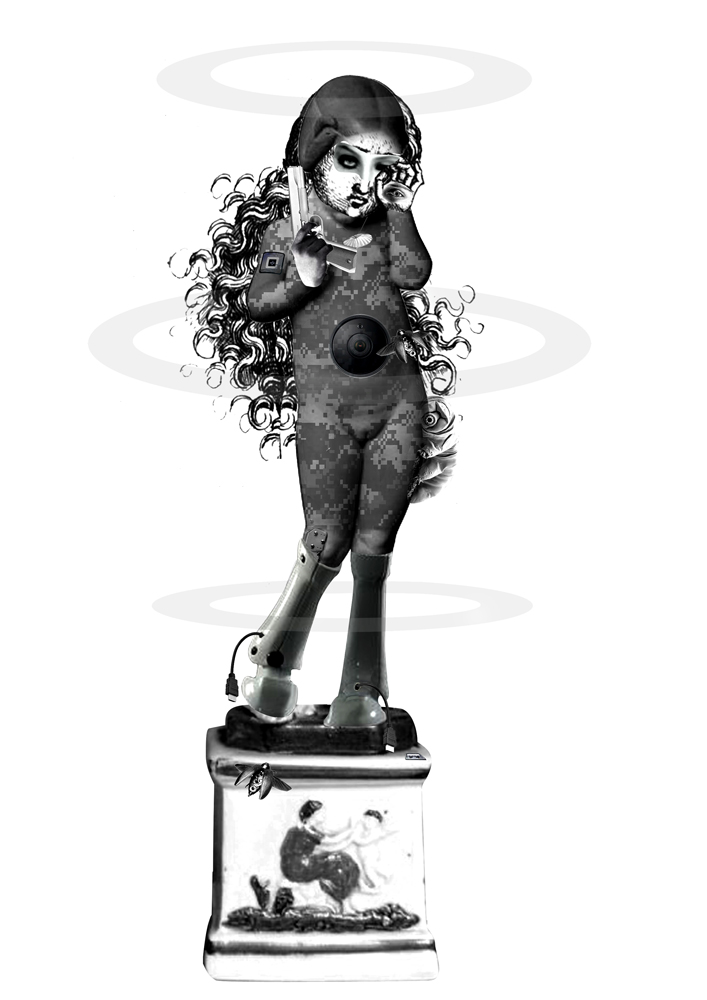 Each laser-cut
standing figure adds to the painstakingly constructed tableau of cultural and
art-historical references, conflating past, present and future in one pictorial
event; a timeline of interacting and cascading cause and effect. Classical and
Renaissance sculptures stand in ruins, symbols of the true democracy of times
gone by, when oral tradition enabled the collective achievement of a healthy
balance between time gone by and time still to come. Semi-bionic, the victims
of technology, these sculptures are transitioning to computer-directed
automata. Yet even these robots are at risk, positioned – helplessly rooted –
amid armed putti on hoverboards, swooping menacingly, dancing the dance of the
demon alongside dragonflies, which, on closer inspection reveal themselves to
be military drones (sourced, Moreton-Griffiths says, from the CIA flickr site).
Virtual reality headsets, voodoo dolls and segments of indecipherable binary
code: the closer you look, the more threatening the scenario reveals itself to
be. The work collages themes of propaganda, false information, and algorithms
that target us with personalised political messages. The installation, or
combination of elements as a whole, takes precedence over individual painted or
constructed elements: the crowd, rather than an individual; the complex and
daunting narrative of a mob. Them against us. But who is the us? Clearly, the
‘Other’, the lesser, the victim. Do we, the ‘Othered’ viewers, then stand
united, or is it each man and woman out for him- and herself?

Moreton-Griffiths
wants her timeline to be multidirectional – like a choose-your-own-ending teen
fiction book – but does this allow for undoing one’s false decisions,
redressing one’s mistakes, redeeming society from the sins of the past? In One Dimensional Woman [3],
philosophy lecturer Nina Power speaks of ‘a feminism of failure’ – a model in
which women would have the freedom to fail, to be uncertain, to question, experiment
and ultimately define – and redefine – themselves. Might Moreton-Griffiths’
dystopia be read as a dystopia of failure – a dystopia that might yet be
inverted, rescued, even rendered utopian? 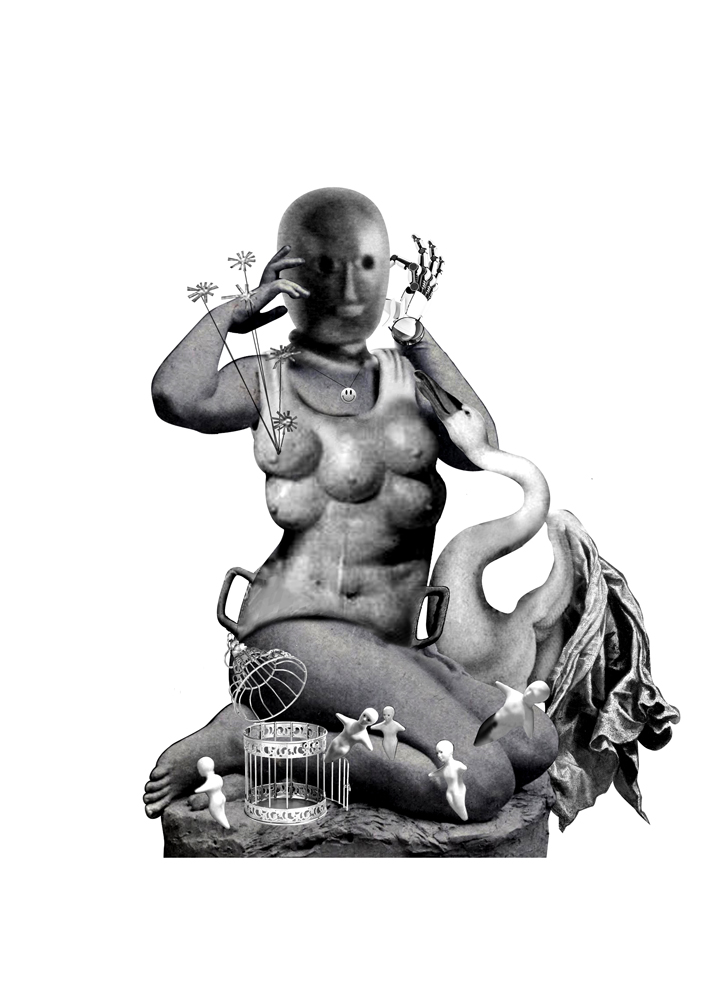 Perhaps what
is represented is a form of limbo, or purgatory, an indefiniteness of time as
much as of identity and direction, a place of looping back in order to move
forward, or of looping forward in order to move back. A place of the conditional
perfect, of would-have-beens and could-have-beens, but not necessarily ought-to-have-beens, for in a model of
non-linearity, such uni-directional modals cease to exist. Anything becomes
possible. The actors becomes the directors. We, the protagonists, build and
arrange the next act. ‘Time present and time past/Are both perhaps present in
time future/And time future contained in time past,’ writes TS Eliot in Burnt Norton (1935). ‘What we call the
beginning is often the end/And to make an end is to make a beginning/The end is
where we start from.’