Review of Gillian Wearing and Claude Cahun: Behind the Mask, Another Mask at the National Portrait Gallery

Gillian
Wearing and Claude Cahun: Behind the Mask, Another Mask

Exploring
gender, identity and the shifting notion of self in one’s artwork, especially
through photography and the “selfie”, might be de rigueur at the moment, but a
century ago, when the French artist and writer Claude Cahun (née Lucy Renée
Mathilde Schwob, 1894-1954) began to do so, she was alone in the field.
Although only one of her photographs was shown during her lifetime, Cahun began
experimenting with photography and self-portraiture as early as 1912, working
together with her partner (and later step-sister), Suzanne Malherbe (who also
changed her name to the equally androgynous Marcel Moore). Fashioning masks and
costumes to masquerade as women, men, and everything in between – Cahun herself
wrote: “Masculine? Feminine? It depends on the situation. Neuter is the only
gender that suits me” – she explored the construction of identity, decades
before Judith Butler’s theorising on its performativity in Gender Trouble (1990). After time spent in Paris amidst the
Surrealist movement – André Breton described Cahun as “one of the most curious
spirits of our time” – Cahun and Moore settled on Jersey in 1937, where they
went on to launch a resistance movement against the Nazis, before being
imprisoned and sentenced to death in 1944 for counter propaganda tracts. Both
attempted suicide but were taken to hospital and survived. They were released
in 1945, on the eve of liberation. Much of Cahun’s work had been destroyed by
the Nazis, but she continued to experiment with photography until her death at
the age of 60. 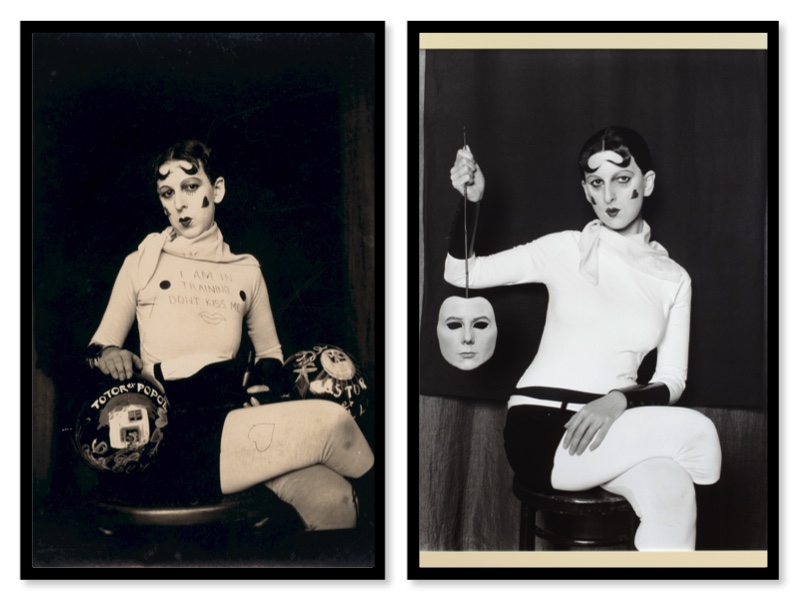