Review of Strange Worlds: The Vision of Angela Carter at RWA, Bristol

One of the somewhat contrary signs
of success for an author is when her works are well known by the general
public, even if they have not been quite so widely read as to match this
awareness. Such seems to be the case for Angela Carter (1940-92), whose vivid
and enduring imagery and fantastic metaphor have influenced generations of
readers and visual artists – many through the active enjoyment of her written
word, which paints its own pictures using syntax and vocabulary as its
paintbrush and palette; others through a form of collective osmosis. To mark
the 25th anniversary of Carter’s untimely death – at the age of 51, from lung
cancer – and the publication of a new biography, the
RWA in Bristol (the city where Carter studied and wrote five of her nine novels) is
hosting a fabulous exhibition, comprising artworks that inspired Carter and
contemporary works influenced – directly or indirectly – by her writings. 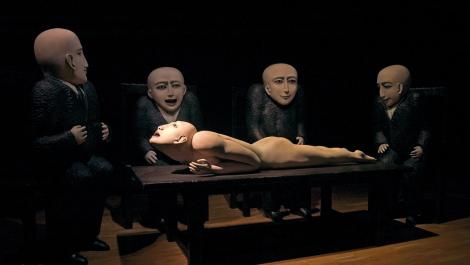