Essay to accompany The Overview Effect at Lewisham Art House

Art is a vehicle that allows us to transcend
linear time, to travel backward and forward into personal and transpersonal
history, into possibilities that weren’t realised and those that might be.[1]

According to
this view of art, an artist might be seen as something akin to an astronaut –
able to travel outside of the earthly realm of being and see our planet and the
life upon it from a different – and unique – vantage point, experiencing the
familiar and quotidian afresh, as if unknown.

In 1987, Frank
White coined the term ‘the Overview Effect’[2] to
refer to the tales of inspiration, overwhelming emotion, and sense of oneness, or
transcendence, described by astronauts upon seeing firsthand the reality of the
Earth – ‘a tiny, fragile ball of life’ – in space. In this exhibition of the
same name, five artists set out to query their own – and their viewers’ – world
views, questioning, as they do, the very viewing process itself. 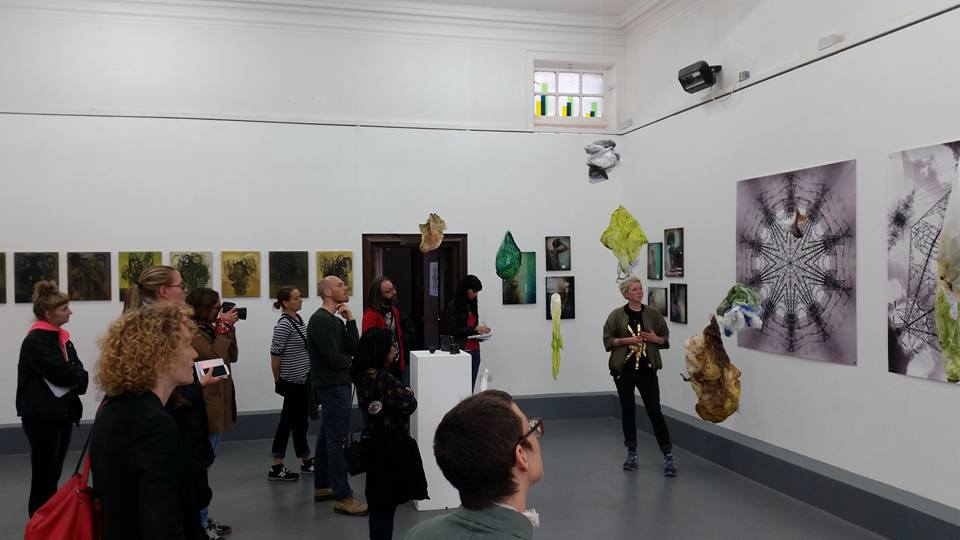 In her
predominantly grisaille paintings of bunches of flowers, Miranda Boulton
emphasises this notion of fragility, as well as playing with the idea of
looking down on something from darkness. Sourcing images of flowers late at
night on Instagram, Boulton commits them to memory ‘in the no man’s land
between being awake and asleep’. The following day, she paints the bouquets
from memory, wilting, overlaid on older paintings, creating an archaeology.
‘Art,’ writes Jean Cocteau, ‘is a marriage of the conscious and the unconscious,’[3] and
Boulton’s work epitomises this, imbuing these memento mori with moods and emotions from her own existence and
from the transient passing of others.

Katya Kvasova’s
paintings also sit on this boundary, ‘a translucent lens between inner and
outer worlds’. ‘I am drawn to paint people,’ she explains, ‘when they are alone
with their thoughts. I choose to paint them blurry, achromatic and half rubbed
off the canvas because, by making the image so unclear and distorted, I create
a different reality, cinematic maybe, out of time’. The layers create a veil
and the stripes physically separate these worlds. As Tolstoy writes in his
diary: ‘Art is a microscope which the artist fixes on the secrets of his soul,
and shows to people these secrets which are common to all’.

Responding directly
to the venue, Fiona Grady will make an intervention on to the large
windows of Lewisham Art House, creating playful yet meditative moments that
appear and disappear with the ephemeral summer light, opening up visitors’ eyes
to spot as yet unseen intricacies of the familiar space. Her large vinyl drawings
map the movement of light, capturing and creating shadows, repeating geometric
motifs and offering multiple, alternative views. This unbalancing act – one of
stepping back and re-viewing, of gaining an ‘overview’ – ultimately instils a
deeper understanding of the object or location at hand.

Henrietta
Armstrong similarly works with an almost sacred geometry, creating large-scale
digital prints from photographs of pylons. Mirrored and manipulated, these
impending Brutalist structures acquire a serene beauty, a mandala-like quality.
‘We see the sun in a blue sky,’ notes shuttle astronaut Jeff Hoffman, ‘but up
there, you see the sun in a black sky… You are seeing it from the cosmic
perspective’. This is something Armstrong’s work shares. ‘I’ve been looking at
the idea of future civilisations or aliens looking at these weird structures
without knowing what they were for,’ she explains, ‘like they were totems or
deities to worship or offerings to our gods’.

Hayley
Harrison’s plastic bags hang at different heights, somewhere between painting
and sculpture, and invite viewers to literally adopt alternate points of view. By
layering the fragile structures with clear gesso; filling or coating them with
paint, which cracks and slides, building craters and valleys; and sometimes sewing
into them with fishing lines to give form,
Harrison conjures collapsed and deflated planets out of the detritus of human
life. ‘Art
is not Nature, art is Nature digested. Art is a sublime excrement.’[4]

Unfortunately,
most of us will never have the privilege of going into space. Research
scientist David Yaden argues, however, that one needn’t travel that far. ‘We can experience a little bit of the Overview Effect
on mountain tops or by viewing a beautiful sunset. There are a lot of
opportunities for these experiences that are all around us,’ he says.[5] And
that is what the artists here seek too. By stepping back and establishing a
different perspective, they acquire their own vantage point and their own
overview.

[5]Cited in Jessica Hullinger,
‘The transcendental revelations of astronauts’ in The Week, 28 April 2016. Available online at:
http://theweek.com/articles/619451/transcendental-revelations-astronauts
[Accessed 15 May 2016]