Naufus Ramírez-Figueroa (b1978) is
a performance and visual artist whose work draws on disparate sources of
inspiration. Growing up during the Guatemalan civil war was certainly an
influence, but Ramírez-Figueroa is widely travelled and has studied and worked
abroad, including in Vancouver, Chicago, Maastricht and Weimar. It was during
his time spent in Weimar, lonely and unable to communicate with those around
him, that he watched a large amount of YouTube videos, which indirectly spawned
Babylonian Fantasy, four gold geometric shapes made from polystyrene and resin,
which seem to wriggle and metamorphose as you watch them. Filling the first
gallery space at Gasworks, they both intrigue and repel. 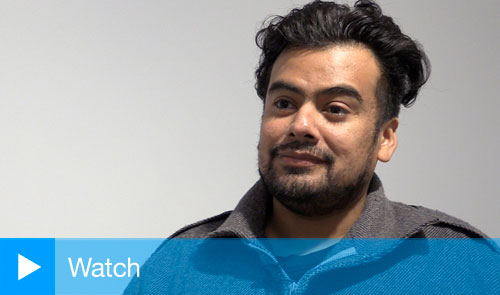 The second room in the exhibition
is a dark cave, in which there are eerily glowing “rocks”, some hanging and
swaying slightly, so as to add to the viewer’s disorientation. In the centre, a
large finger points – is it accusingly? – dotted with celestial constellations:
God’s Reptilian Finger. This installation was similarly inspired by YouTube videos,
conspiracy theories and The Book of Mormon, although, Ramírez-Figueroa admits,
he is not sure that followers of the religion would identify with his work.

Primarily a performance artist,
Ramírez-Figueroa is also working on a new commission in participation with BMW
Tate Live: Performance Rooms, to produce a work exclusively for web broadcast,
which will be live-streamed on Thursday 3 December from Tate’s YouTube channel
and website.