Marguerite Horner: Bringing the Sublime into the Mundane

Marguerite
Horner: Bringing the Sublime into the Mundane

The Sufi
master Pir Vilayat Inayat Khan once said: ‘To bring the sublime into the
mundane is the greatest challenge there is’. The sublime, ideas of which are
generally dated back to the first century AD, when the Greek critic Longinus
wrote an aesthetic treatise on the subject,1 is largely associated
with greatness, awe and something exceeding human understanding or
representation. Kant suggests it has the power to transform and uplift, to make
human reason transcend sensibility, by confronting it with something at first
seemingly incomprehensible.2 His focus – as well as that of his
predecessor Edmund Burke3 – is upon nature and the divine as sources
for the sublime experience, and this can also be seen in contemporary 18th and
19th-century artworks by artists such as Caspar David Friedrich, JMW Turner and
John Martin. 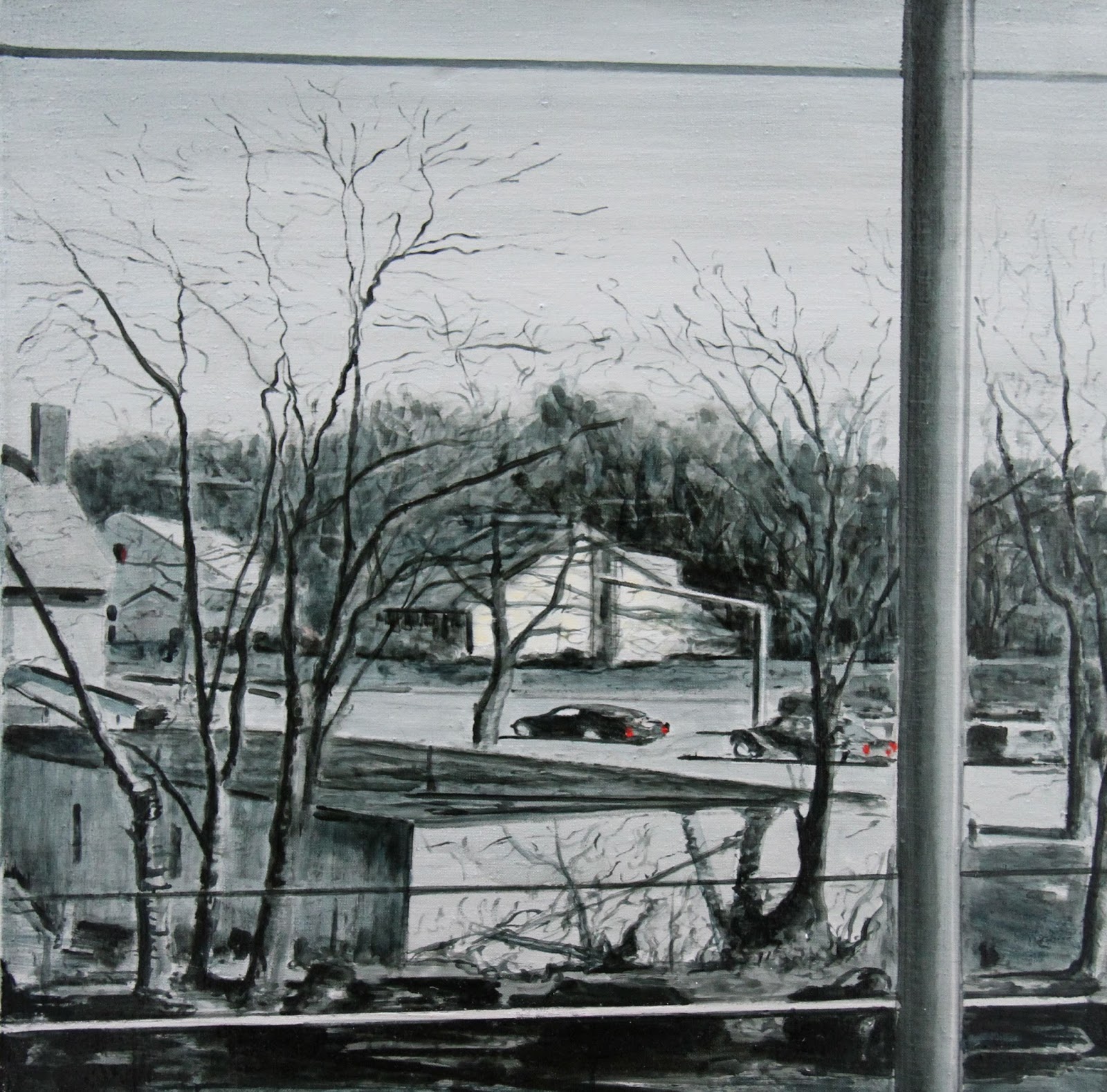 Marguerite
Horner’s paintings might therefore appear to depict the polar opposite of the
sublime. Her suburban streets and highways, deserted parking lots, cars,
telegraph poles and wires, largely inspired by her experiences of small town
America, are the stuff of the everyday – mundane, quotidian, manmade. Yet, with
their grisaille palette, fluctuating between being crisply focused and blurred
to the point of obfuscation, there is something uncanny about these otherwise
easily recognisable scenes. They are familiar, yet strange – estranged. Freud delineates
the uncanny as ‘that class of the frightening which leads back to what is known
of old and long familiar’,4 as ‘nothing new or alien, but something
which is familiar and old-established in the mind and which has become alienated
from it only through the process of repression’.5 He drew a
distinction between the uncanny and the sublime, by imbuing the latter with
solely positive attributes, ‘rather than with the opposite feelings of
repulsion and distress’. The uncanny, on the other hand, he classed as those
things ‘which lie within the field of what is frightening’.6,7 This
is false on two counts: (i) his interpretation of the sublime is somewhat
rose-tinted, since it is often associated, in the first instance, with terror
and horror, and (ii) this very process of alienation and repression, which
Freud attributes to the uncanny, is what leads to Kant’s transcendental
encounter with the sublime.

Consider,
for example, the incident with the madeleine in Proust’s Combray. Describing the moment of tasting the known-but-unknown
delicacy, Proust writes: ‘…this new sensation having had on me the effect that
love has of filling me with a precious essence;
or rather this essence was not in me, it was me. I had ceased to feel mediocre,
contingent, mortal.’8 His description is of a form of
self-transcendence, an encounter with the sublime, triggered through an
encounter with the alienated and forgotten, the known-but-unknown, the uncanny.
In the same way, Horner’s paintings serve to trigger a memory. In their veiled
state, they seek not to represent, but to signify. They seek to fill their
viewer with an essence. This
realisation and resultant introspection then suggests that Horner’s paintings
have succeeded in meeting the Sufi master’s challenge: a seemingly mundane
image, like the simple madeleine, can contain the seed, or essence, of a memory or state, that can lead the viewer to
transcend his or her physical being and cease to feel ‘mediocre, contingent,
mortal’. 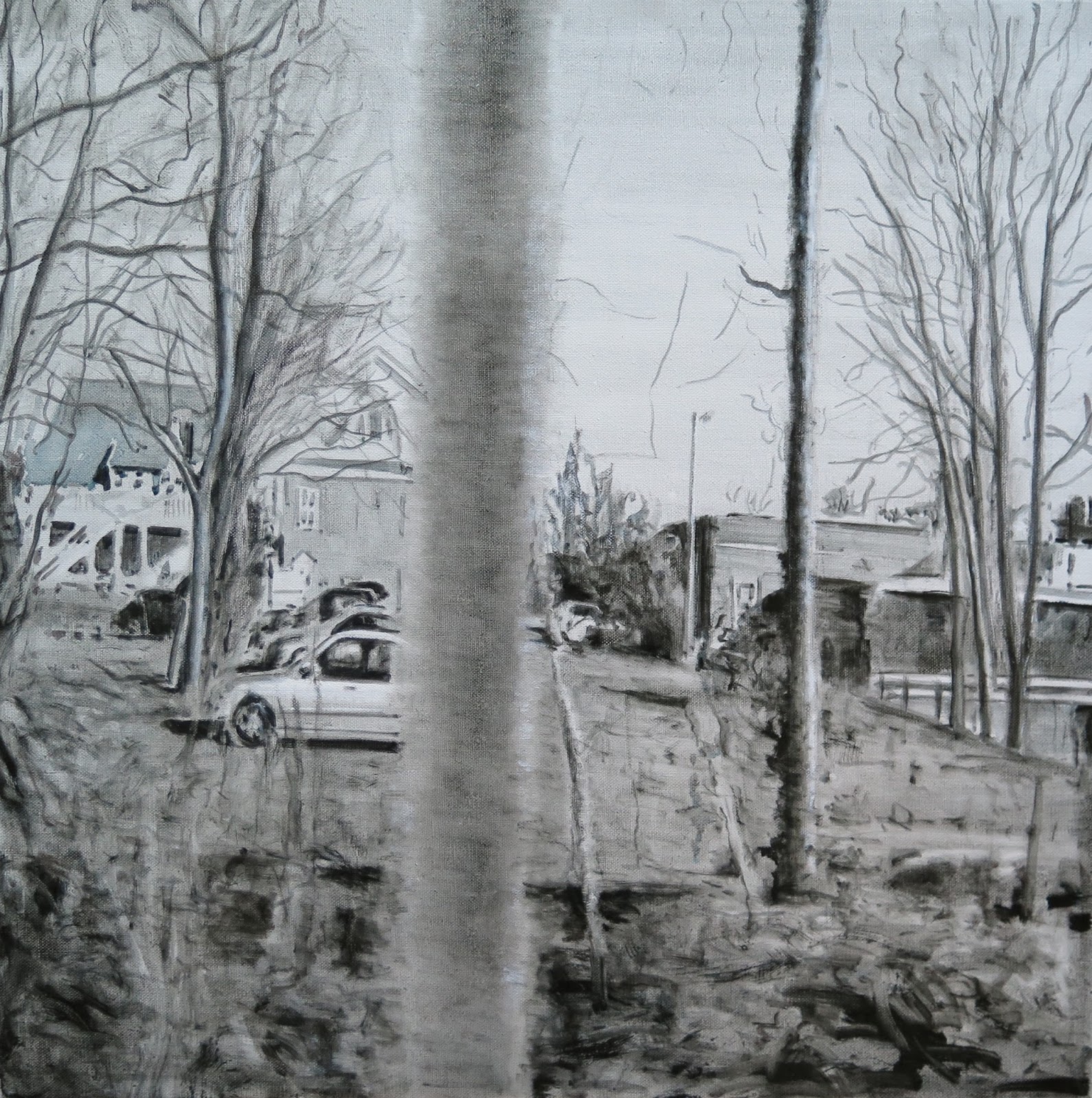 Simon
Morley, discussing the distinction between the beautiful and the sublime, notes
that beauty is static, that we are charmed, seduced and captivated by it, while
the sublime transports, moves and dislocates us from our self. He references
how Arthur Schopenhauer ‘explored the fissure that lies at the heart of being,
and envisaged a self that can in certain situations observe itself in the very
act of confronting a fearful inner abyss’.9 It is this inner abyss
that Horner captures so strikingly in her paintings: a sense of loneliness and
emptiness, a far greater and more terrifying phenomenon than anything nature
can offer. As Derrida observes, contrary to Kant and Burke: ‘The sublime is not
in nature but only in ourselves’.10 Horner herself speaks of taking
inspiration from Jung, when he declared a similar, if reversed, observation:
‘For the only equivalent of the universe within is the universe without’.11
She says: ‘In my paintings, I strive to capture the meaningful dialogue between
my internal and external realities, which are metaphorically portrayed, by
using images intuitively taken from my passing landscape’.12

To return
to Morley’s notion that the sublime transports, moves and dislocates us from
our self, we begin to understand the latent symbolism of Horner’s cars: parked
or frozen in movement, they are vehicles of transcendence, transporting the
viewer from within to without, from without to within. Her use of blurring,
reminiscent of Gerhard Richter’s use of the squeegee, has dual effect. Firstly,
it suggests transience – a sense of passing by, of motion. Secondly, like the
veiling of the greyscale palette, it reduces the image to the bare minimum –
the Proustian essence. Richter,
speaking of his own use of the technique, says: ‘I blur things to make
everything equally important and equally unimportant. […] I blur things to make
all the parts a closer fit. Perhaps I also blur out the excess of unimportant
information’.13 In terms of the sublime, these blurred passages
represent what Lyotard terms: ‘a
cleavage within the subject between what can be conceived and what can be imagined or presented’.14
They are the physical, painterly manifestation of this fissure. 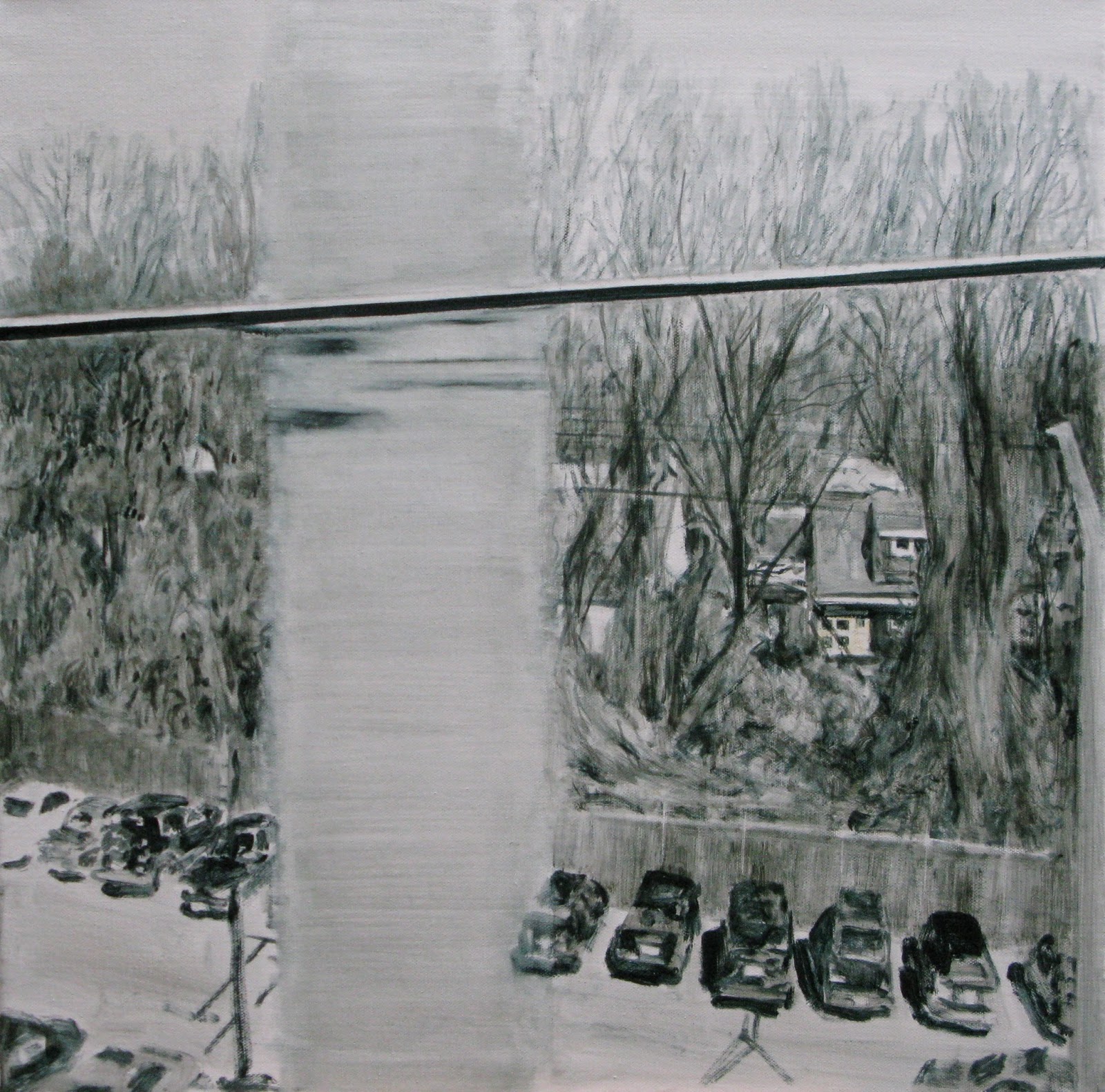 Derrida,
in his essay ‘Parergon’, focuses attention not on the object of
contemplation (the work, or ‘ergon’), but on its boundary. He speaks of the
need to frame something to prevent it from becoming merely monstrous. Horner’s
paintings are full of frames within frames: the grey skies, streets, and
parking lots are bisected by bright white road markings, lamp posts, trees, and
telegraph wires. In Boxed In (2010),
the block of flats is set in a vivid red square, restricting the main frame of
reference to a fraction of the composition, with the mundane continuing all
around. Within this red frame, a myriad windows – further, smaller frames –
push up against one another. Each offers a different (albeit the same)
viewpoint, a reflection of the outer world. This segment could be seen from any
angle, upside down, it would make no difference. Pixelated imagery, like
reflections on the retina, multiple tiny photograms, just prior to being
interpreted into a coherent image by the mind. Horner speaks of a constant
dialogue between the mark and the inner eye in the process of her painting. The
same is true for the viewer as he or she interprets it. Horner is providing
just the ingredients – the flour and lemon juice of the madeleine – and asking
viewers to reconstruct their own memories – to recognise in the universe
without, their own universe within and to confront and transcend this inner
abyss. In so doing, she is bringing the sublime into the mundane. 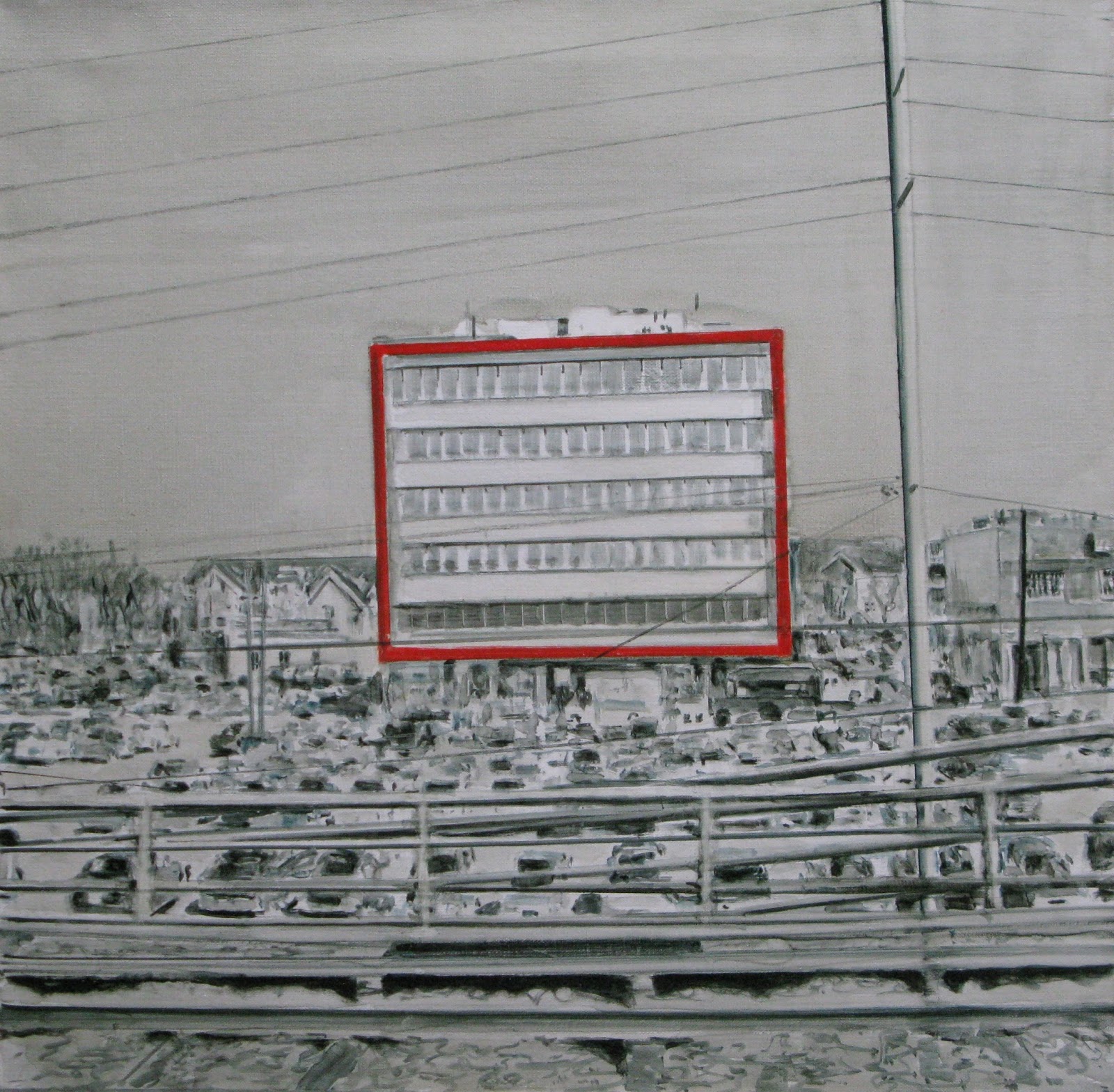 3. Edmund Burke, A Philosophical Enquiry into the Origin of
our Ideas of the Sublime and Beautiful, 1757 (Oxford: Oxford University
Press, 2008)

7. See also Jessica Wren Butler, ‘What is Literature?: The sublime/uncanny
as a conceptual framework for answering the answerless, and the problematic
quest for certainty,’ essay available via academia.edu (accessed 11 October
2015)

12. Personal communication
with the artist, August 2015

14. Jean-Francois
Lyotard, ‘The Sublime and the Avant-Garde’ in The Sublime: Documents of
Contemporary Art, ed. by Simon Morley (London and Cambridge, MA:
Whitechapel Gallery and The MIT Press: 2010), pp27-40, p36

You wont find it by yourself