‘It must indeed be acknowledged that she is the most
extraordinary person of the age … we have seen no one who has united so many
military, political, and literary talents.’ [The Annual Register]

Extraordinary as a soldier and diplomat, an author and
spy, and as an expert sword fighter too, the Chevalier d’Eon – Charles
Geneviève Louise Auguste André Timothée d’Eon de Beaumont (1728-1810) – was a
noted figure in international politics and high society. But what made the
Chevalier a truly colourful and celebrated character of 18th century Britain
was the fact that no one was quite sure whether or not s/he was a man or a
woman. Born in France, s/he came to England in 1762, ostensibly as Louis XV’s
interim Ambassador, but in reality also spying for the French King. S/he lived
in London until 1777 as a man, and from 1786 (aged 49) to 1810 as a woman. Rumours
had in fact begun as early as 1771 and bets of more than £200,000 were
regularly placed as to the Chevalier’s ‘true’ sex. Throughout, the Chevalier
remained tight-lipped and would neither speak out on the matter, not allow a
physician’s examination. Ultimately, s/he agreed to the French King’s demands (on
whom s/he was dependent for an income) that s/he should dress ‘gender-appropriately’ –
i.e. in female clothing. The Chevalier continued successfully to fence wearing
a dress – adorned with the Croix de St Louis, a decoration awarded only
to men, and won by d’Eon in his/her time as a Captain in the French Dragoons. 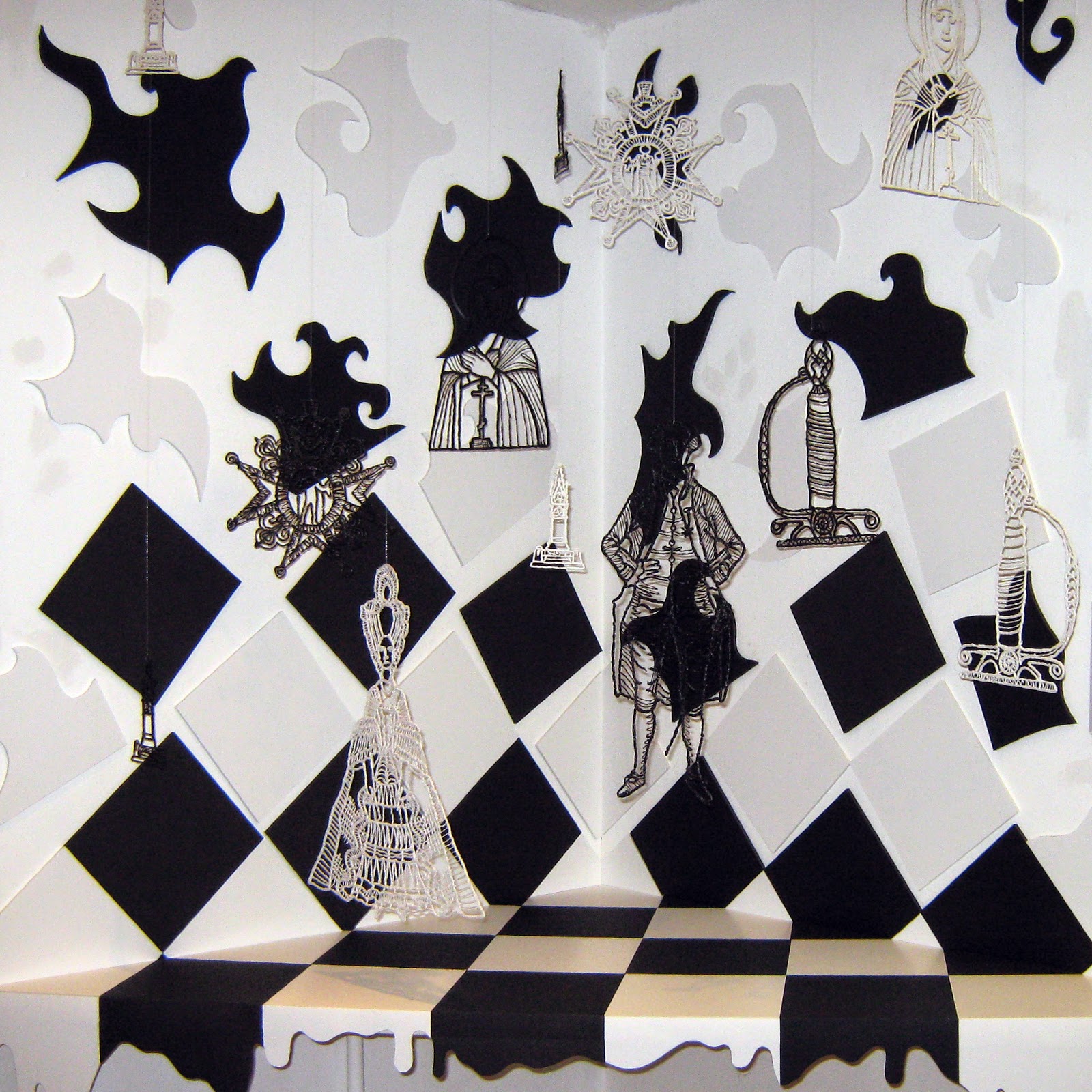 Upon his/her death, d’Eon was found
to be physically typically male. S/he was buried in the churchyard of Old St
Pancras Church, which adjoins the St Pancras Hospital grounds, where Camden
& Islington LGBT History Month’s annual art exhibition, Loudest Whispers,
is currently taking place. This year’s exhibition includes a specially
commissioned work by trans* artist Simon Croft, responding to the life and
legend of the Chevalier. Croft has carefully crafted a chess board – The D’Eon
Gambit (named after the sacrifice of a piece or pieces in order to gain
advantage in the game overall – particularly relevant to the Chevalier’s life,
one might say) – where each playing piece represents a different aspect of the
Chevalier’s life: D’Eon is both the King and Queen symbolising
his/her dual gender presentation and close relationship with the French King; the Knight is represented by
the Croix de St Louis; the Rook
by a sword hilt; the Bishop
by St Pelagius, symbolising D’Eon’s strong religious beliefs and the many
references in his/her autobiography to such gender transgressing religious
figures as precedents for his/her own situation; and the Pawns are represented by the
Burdett-Coutts memorial in St. Pancras Old Church churchyard, where the
Chevalier’s name can be seen second from the top on one of the sides. Despite
using 3D printing techniques, Croft’s playing pieces have remained, almost
contradictorily, relatively 2D. They look both fragile and delicate hanging
above a shattered board. Croft often works with this distinction between 2D and
3D, between concrete identity and variable viewpoints. A 3D object, squashed
flat and restricted to one angle, may then, when hung, as these pieces are, cast
literal shadows of doubt over their superficial appearance. 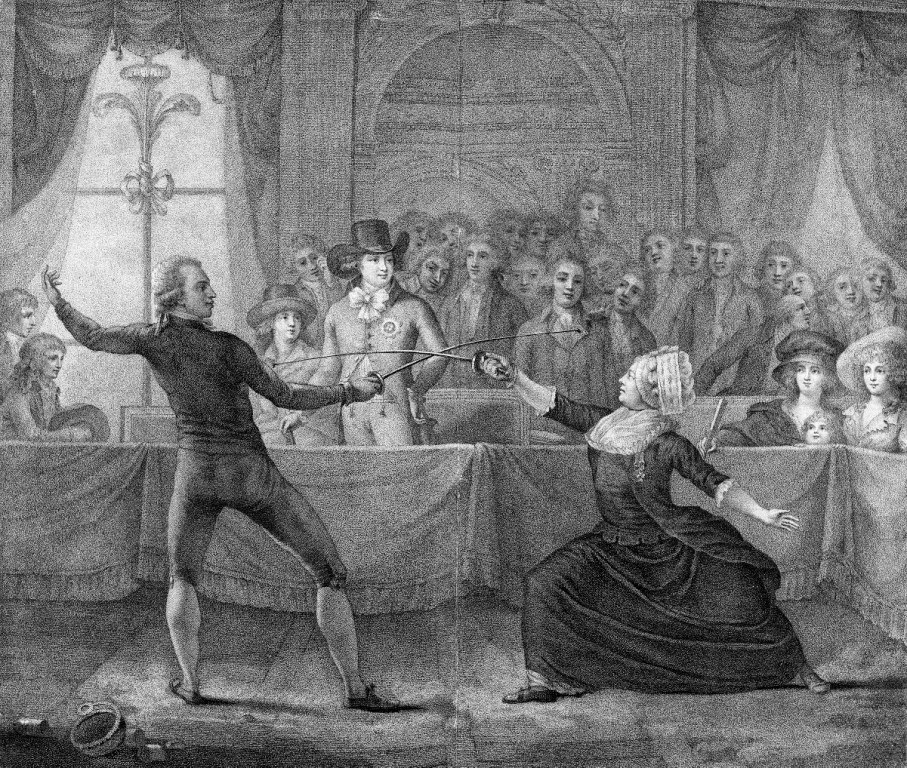 This is not the only extant artistic representation of the
Chevalier, since there were many contemporaneous portraits and engravings of
him/her fencing in full dress. One notable portrait by Thomas Stewart (1792),
previously mistakenly held to be a portrait of an unknown woman, before being
cleaned and revealing the unmistakable five o’clock shadow, is on display in
the National Portrait Gallery. D’Eon also left behind an autobiography, which
remained unpublished until 2001. Written in French, and very much for a
contemporary public, d’Eon self-refers with a mixture of masculine and feminine
terms. Much of the content can be independently verified, but it is clear that
some stories were invented or altered to suit the self-presentation s/he sought
at different times. In the book, D’Eon presents the life of a female-to-male
transvestite (claiming to have been born a girl and raised a boy), whereas the
truth seems instead to be that s/he was born and raised a boy, later choosing
to live as a woman (thus, a male-to-female transgendered life). What is
apparent is that d’Eon’s life blurred gender binaries and we can only guess at his/her
true sense of gender identity and what that might have meant at the time.

Talks by and discussion between installation artist
and transman Simon Croft and LGBT sociologist Natacha Kennedy.

The evening will be hosted by art critic and writer
Anna McNay and includes a new installation based on d’Eon by Simon Croft on
display in the gallery.

The
Assault, or Fencing Match, which took place at Carlton House on the 9th of
April 1787, between Mademoiselle La Chevalière
D’Eon
de Beaumont and Monsieur de
Saint George.

Engraving
by
Victor Marie Picot, based on the original painting by Charles Jean Robineau