“You’re welcome to smoke,” Maggi Hambling instructs rather
than offers, as we climb the stairs of her south London house, she already
coughing, and carrying not one but two packets of cigarettes from a large
multipack on the kitchen table. “Oh, thank you, but I don’t,” I reply. “Shame,”
she says, as we reach her studio, which she describes as “the world’s largest
ash tray”. 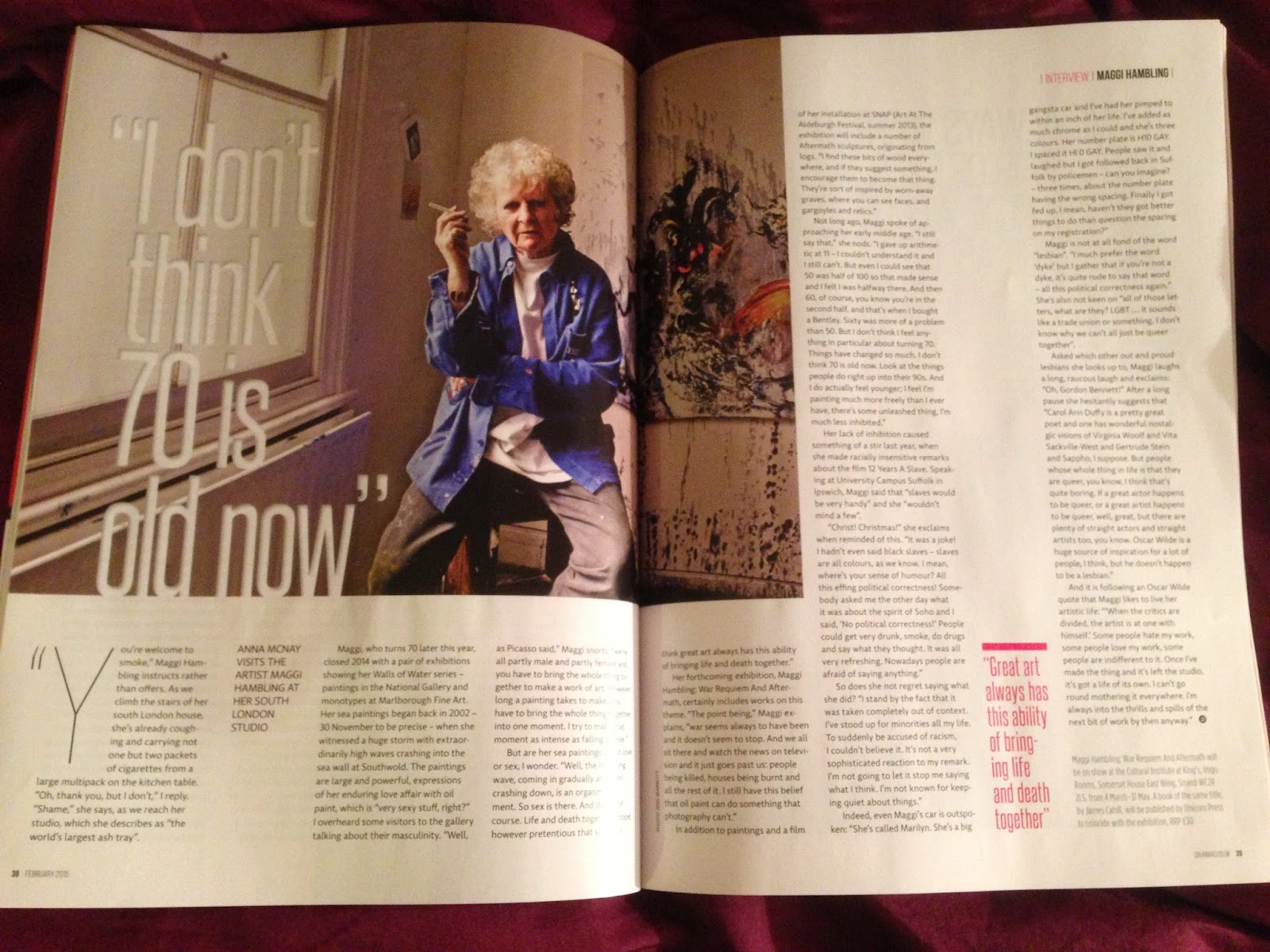 Maggi, who turns 70 later this year, closed 2014 with a pair
of exhibitions showing her Walls of Water series – paintings in the National
Gallery and monotypes at Marlborough Fine Art. Her sea paintings began back in
2002 – 30 November to be precise – when she witnessed a huge storm with
extraordinarily high waves crashing into the sea wall at Southwold. The
paintings are large and powerful, expressions of her enduring love affair with
oil paint, which is “very sexy stuff, right?” I overheard some visitors to the
gallery talking about their masculinity. “Well, as Picasso said,” Maggi snorts,
“we’re all partly male and partly female and you have to bring the whole thing
together to make a work of art. However long a painting takes to make, you have
to bring the whole thing together into one moment. I try to make that moment as
intense as falling in love.” But are her sea paintings about love or sex, I
wonder. “The incoming wave, coming in gradually and then crashing down, is an
orgasmic moment. So sex is there. And death, of course. Life and death
together, I hope, however pretentious that sounds. I think great art always has
this ability of bringing life and death together.”

Her forthcoming exhibition, Maggi Hambling: War Requiem
& Aftermath, certainly includes works on this theme. “The point being,”
Maggi explains, “war seems always to have been and it doesn’t seem to stop. And
we all sit there and watch the news on television and it just goes past us:
people being killed, houses being burnt and all the rest of it. I still have
this belief that oil paint can do something that photography can’t.” In
addition to paintings and a film of her installation at SNAP (Art at the
Aldeburgh Festival) (summer 2013), the exhibition will also include a number of
Aftermath sculptures, originating from logs. “I find these bits of wood
everywhere, and if they suggest something, I encourage them to become that
thing. They’re sort of inspired by worn away graves, where you can see faces,
and gargoyles and relics.”

Not long ago, Maggi spoke of approaching her early middle
age. “I still say that,” she nods. “I gave up arithmetic at 11 – I couldn’t
understand it and I still can’t. But even I could see that 50 was half of 100
so that made sense and I felt I was half way there. And then 60, of course, you
know you’re in the second half, and that’s when I bought a Bentley. 60 was more
of a problem than 50. But I don’t think I feel anything in particular about turning
70. Things have changed so much. I don’t think 70 is old now. Look at the
things people do right up into their 90s. And I do actually feel younger; I
feel I’m painting much more freely than I ever have, there’s some unleashed
thing, I’m much less inhibited.”

Her lack of inhibitions caused something of a stir recently,
when she made racially insensitive comments about the film 12 Years A Slave. Speaking at University Campus Suffolk in Ipswich, Maggi said that “slaves
would be very handy” and she “wouldn’t mind a few”.“Christ! Christmas!”
she exclaims when reminded of this. “It was a joke! I hadn’t even saidblackslaves – slaves are all colours as
we know. I mean, where’s your sense of humour? All this effing political
correctness! Somebody asked me the other day what it was about the spirit of
Soho and I said ‘No political correctness!’ People could get very drunk, smoke,
do drugs and say what they thought. It was all very refreshing. Nowadays people
are afraid of saying anything.” So does she not regret saying what she did? “I
stand by the fact that it was taken completely out of context. I’ve stood up
for minorities all my life. To suddenly be accused of racism, I couldn’t
believe it. It’s not a very sophisticated reaction to my remark. I’m not going
to let it stop me saying what I think. I’m not known for keeping quiet about
things.”

Indeed, even Maggi’s car is outspoken: “She’s called
Marilyn. She’s a big gangsta car and I’ve had her pimped to within an inch of
her life. I’ve added as much chrome as I could and she’s three colours. Her
number plate is H10 GAY. I spaced it HI 0 GAY. People saw it and laughed but I
got followed back in Suffolk by policemen – can you imagine? – three times,
about the number plate having the wrong spacing. Finally I got fed up. I mean,
haven’t they got better things to do than question the spacing on my
registration?”

Maggi is not fond of the word “lesbian”. “I much prefer the
word ‘dyke’ but I gather that if you’re not a dyke, it’s quite rude to say that
word – all this political correctness again.” She’s also not keen on “all of
those letters, what are they? LGBT… It sounds like a trade union or something.
I don’t know why we can’t all just be queer together.”

Asked which other out and proud lesbians she looks up to,
Maggi laughs a long, raucous laugh and exclaims: “Oh, Gordon Bennett!” After a
long pause she hesitantly suggests that “Carol Ann Duffy is a pretty great poet
and one has wonderful nostalgic visions of Virginia Woolf and Vita
Sackville-West and Gertrude Stein and Sappho, I suppose. But people whose whole
thing in life is that they are queer, you know, I think that’s quite boring. If
a great actor happens to be queer, or a great artist happens to be queer, well,
great, but there are plenty of straight actors and straight artists too, you know.
Oscar Wilde is a huge source of inspiration for a lot of people, I think, but
he doesn’t happen to be a lesbian.”

And it is following an Oscar Wilde quote that Maggi likes to
live her artistic life:

“‘When the critics are divided, the artist is at one with
himself.’ Some people hate my work, some people love my work, some people are
indifferent to it. Once I’ve made the thing and it’s left the studio, it’s got
a life of its own. I can’t go round mothering it everywhere. I’m always into
the thrills and spills of the next bit of work by then anyway.”

Maggi Hambling:
War Requiem & Aftermath will be on show at the Cultural Institute at
King’s, Inigo Rooms, Somerset House East Wing, Strand WC2R 2LS, from 4 March –
31 May 2015. A book of the same title, by James Cahill, will be published by
Unicorn Press to coincide with the exhibition, RRP £30

Also published in the February 2015 print issue of DIVA magazine