Maripaz Jaramillo (born 1948, Manizales, Colombia) is a
highly successful artist back home in her native Colombia. She has 126 graphic
works in the Art Museum of Pereira, filling a room named in her honour; she has
painted a grand scale mural on the Museum of Medellin University; and she has
painted portraits of two presidents: Alvaró Uribe (2002-2010) and Juan Manuel
Santos (2010-now). Despite international exhibitions, she has not returned to
London, where she studied for a postgraduate degree in graphic art at Chelsea College
of Art in the late 70s, until now. Coinciding with Pinta, the Latin American
Art Fair held at Earl’s Court Exhibition Centre from 12 – 15 June, Jaramillo is
showing a small but succinct series of work, Ellas, at Sandra Higgin’s Art
Salon, just down the road in Chelsea. I met with her to talk colour, happiness
and politics. 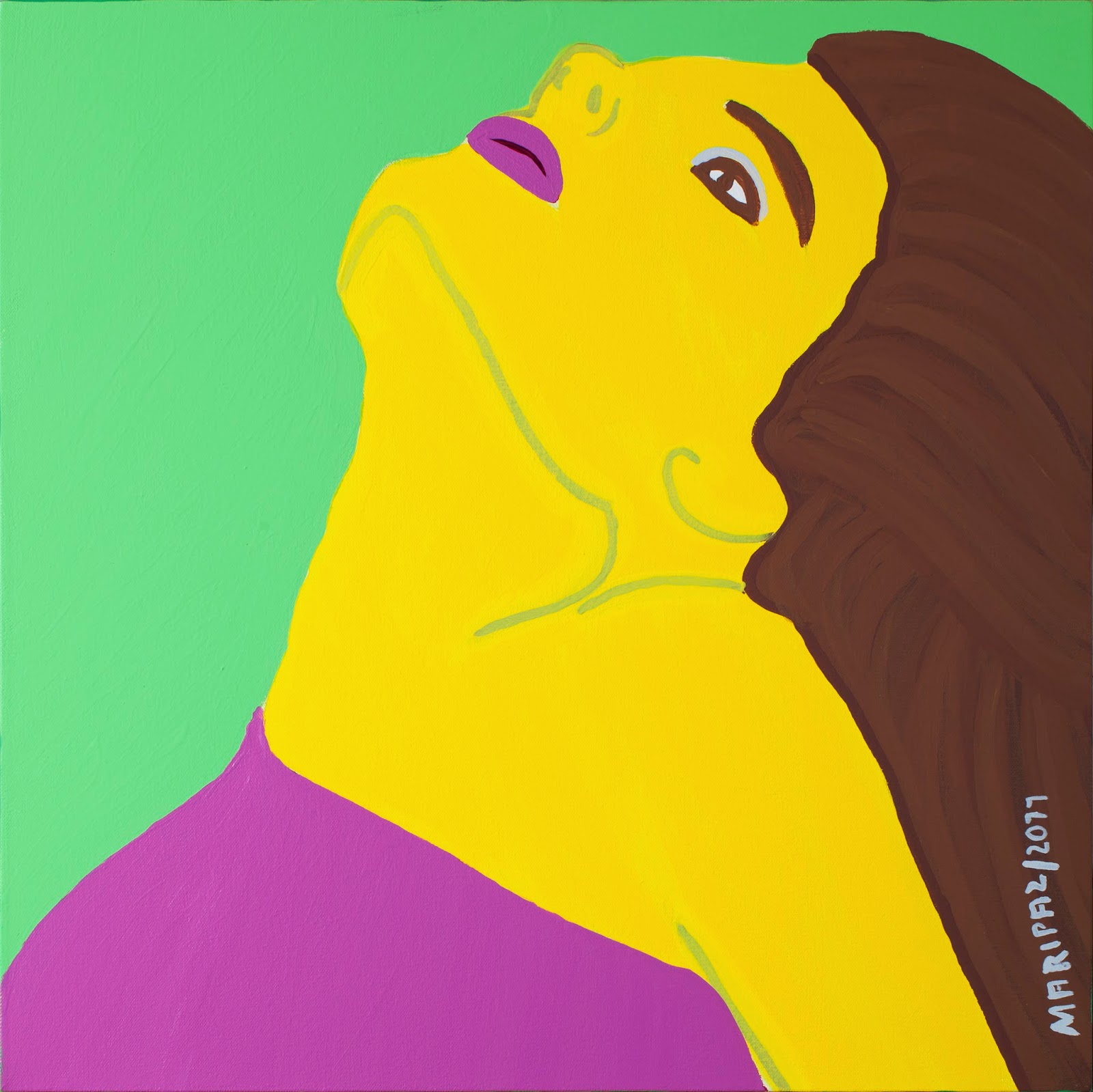 Anna McNay: Let’s talk a little bit first about your work,
in particular your series Ellas. Where do your colours come from? The yellow in
particular, and the greens? What inspired you to use this colour scheme?

Maripaz Jaramillo: For me, the colours are very important.
They’re more important than the drawing. I love colour. In Egypt, the woman was
always drawn and painted as yellow, and the man was brown, because the women
were not meant to go out in the sun. So I took the idea of these colours from
Egypt after visiting the country. And then, in South America, there is just so
much colour. People dress and fill their homes with colour, and so that is why
I work with such strong colours. It’s also a very Pop Art way of depicting
things.

The green is nature. We have a lot of green in my country,
so I love green. Where I grew up, there is a lot of green, because of the
coffee plantations.

Also, yellow and green are not complementary colours – they
are next to one another on the colour wheel – and so they stand out vividly
against each other.

I think it’s also very Expressionist, my work. The drawing
is not as important as the strong image. But it’s still very important to me
that the pictures are figurative.

AMc: The women you depict in Ellas are also very sensual.

MJ: Yes, they are sensual. They are happy women, not sad.
The first graphic series I made, which was very Expressionist, was very strong
and very sad. The women in Ellas are happy and want to live their lives.

AMc: Do you think this represents a change in your own life?

MJ: Yes, I think so. I’ve moved about a lot. I lived in
Cali, which is a very hot city, very sensual, and then I came here and then I
went to Paris. After that I went back to Bogotá. And my work has changed as
I’ve moved. It’s evolution.

AMc: Would you say there is a narrative with your images?

MJ: Yes, I think so. To begin with, the images were very
strong and tortured. Now they are still strong but less tortured. And I think
this is also true of my life, because I was married, and it wasn’t a good
marriage. At the beginning, it was very hard to live with my husband. Now I’m
happy. My work is a celebration. Things are going well. It seems to me that my
life is reflected in my work. It is very important for artists to work what
they live.

AMc: You’ve mentioned sensuality already. Do you think there
is also an element of vulnerability in your Ellas series?

MJ: There is sensitivity, yes.

AMc: You also have zoomed in very close on the women’s
faces…

MJ: Yes, they are very close up, as if you had zoomed in
with a camera. That’s important. It’s important that there is no background. No
distraction. Some of the bigger pictures in the series have green backgrounds
with flowers. But not the smaller pictures.

AMc: There are also some paintings with men in them…

MJ: Yes, I do a lot of couples.  I believe a lot in women, but I am not
feminist. I think life is nice with men. I don’t hate men.

AMc: Some of the women seem almost to be in states of
ecstasy. They’re not just sensual, but also very sexy.

MJ: Yes, they’re very sexy. But all of the women in Colombia
are very sexy. They wear sexy dresses, they move in a sexy way. Our country is
full of people dancing. The politicians are killing one another, but the people
don’t care. They’re just dancing. If you go to a concert, they get up in the
aisles and are all dancing. They’re happy. A recent report showed that Colombia
has one of the happiest populations in the world. There is all of this killing,
but they are happy. They dance, they eat well, and they are happy. That’s what
I take for my work.

AMc: There is a lot of political unrest in Colombia at the
moment and there will be a second round of elections on 15 June, while you are
in London, in fact.

MJ: Yes. President Santos lost the first round in May.
People still believe he will win the second round, on 15 June, but it is a
nasty situation, with war and peace in the balance. I have painted both Santos
and his wife [Jaramillo was commissioned] and also Uribe, the previous
president. When Uribe was in power, Santos was his number two and they were
like brothers. Uribe was funded, in part, by the Americans and began a war on
the Farc [the Guerrilla army]. He had two terms as president, and, when Santos
took his place, he felt his policies were safe. Santos, however, sees himself
as a peacemaker and has very controversially embraced Venezuela, where the Farc
had been hiding, just over the border, and so he has been criticised for
harbouring the Farc. He wants to embrace them and incorporate them into the
government with a peace treaty. Uribe is now trying to get back into the
government as a senator and is waging a very personal war against Santos. There
are too many bad things going on. I want to paint happy things.

AMc: Do you use a model for your painting?

MJ: No, I use the television a lot. There is a Colombian
television programme called Bailando por
un Sueño (‘Dancing for a Dream’) [something like Strictly Come Dancing], where celebrities have to learn to dance. One
painting – Las Estrellas – is of
dancers and singers at a fiesta in a small town with horses and cows and music.

AMc: You are also currently producing work for an exhibition
at your gallery in Colombia, Alonso Garcés Galería in Bogotá, next year – Abrazos (‘Embraces’). Do you tend to
work on a number of series consecutively?

MJ: No, I do about 30 works in each series and then finish
it and start another series. I used to complete about one series every three
years. My works may look quite easy to make, but they’re not. I spend about two
months on each painting. There are layers. First of all I work with the yellow
and the other colours and the green always comes last.

AMc: How important is it for you to show your work
internationally, and to show a positive side of Colombia?

MJ: It’s wonderful. Especially to be in London for the first
time after 30 years. I’ve shown work internationally, but I’ve never been back
to London. I’m so happy to be here with Sandra. London has a sentimentality for
me. In Colombia, my work is recognised and people like it. In London, I will
see what happens, what people say. It’s very important what Sandra is doing,
bringing artists here from Colombia and Brazil. She is very brave.

Private View, in the presence of the Colombian Ambassador,
Nestor Osorio

Visit by appointment only