Photo Spread: The Look of Love

The Look of Love

‘Love is the driving force behind most everything I
do,’ admits Emli Bendixen. Her series, Modern Families, set out to explore the
differences between the ‘modern’ and more ‘traditional’ family unit,
discovering, however, that while the structures may differ in terms of genders,
children, number of partners and so on, ultimately the same values – love,
respect and sharing – seem to be in place. Before taking the pictures, she
spent a few hours with each couple, drinking coffee and chatting about their
homes and everyday lives. The domestic settings meant that the girls were more
at ease. Bendixen encouraged them to ‘do what they normally do’ and the result
is a series of intimate pictures showing couples at home and capturing love in
its everyday domestic form. 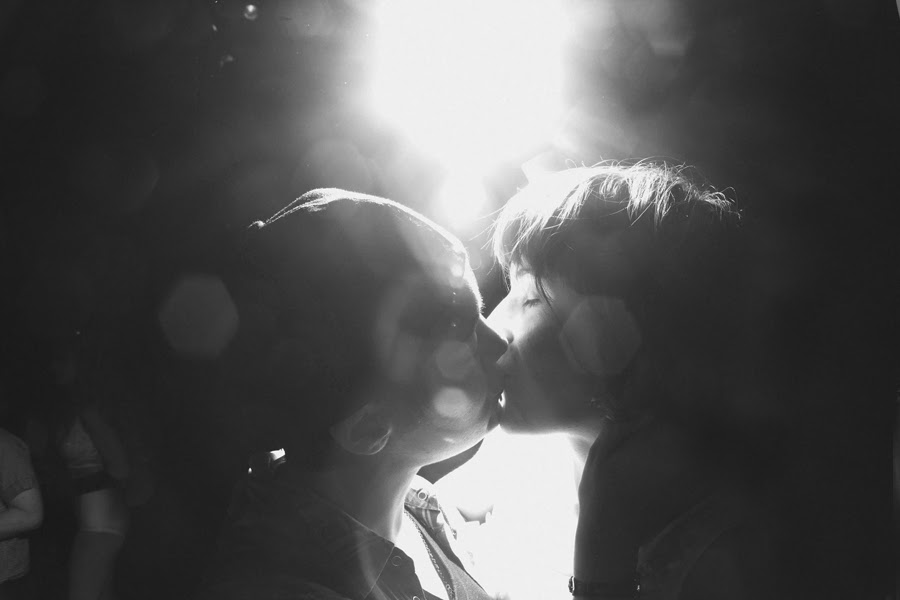 Holly Falconer’s two images capture the essence of
love through a kiss. The photograph of Tamara and Ann-Katrin originates from
a fashion shoot for DIVA in 2010. Whilst the fashion may have dated, the simple
expression of human emotion remains internationally valid to this day. The atmospheric
black and white photograph of Anna and Sophie was taken at Duckie Goes to the
Gateways earlier this year. ‘There was something poignant about capturing two
of my friends kissing in a space that was once a rare safe zone for London
lesbians, where they could be themselves,’ says Falconer.

Bex Wade’s two photographs were taken a
year apart. Similarly, both convey a shared moment of love in a space of pride
and celebration – the NYC Dyke March – which Wade describes as ‘a
little like Christmas for lesbians; a cherished and
safe space for couples to outwardly and proudly express their love in a society
which can still be sometimes unforgiving.’ The physical closeness, the smiles,
the eye contact, the ease with which two people appear to merge into one being
– all of these are features of love writ large. The camera captures a single
moment in one couple’s life, but here it speaks of duration and universality,
of love as a uniting force.

To see the rest of this photo spread, please buy the February 2014 Love issue of DIVA magazine, available from http://divadirect.co.uk/magazine/diva-magazine-february-2014.html