Catalogue Essay for Heaven and Hell at Espacio Gallery

A
heaven of hell, a hell of heaven

Catalogue Essay for Heaven and Hell

In the curators’ introduction to this exhibition, the
question is raised as to how the age old artistic theme of heaven and hell
might find any resonance “in our secular culture, where there is no
otherworldly accountability for our behaviour, where we expect our needs and
even our wants to be met here and now [and] where the consumerist imperative
leaves little room for postponement of desires.” Leaving the overarching
question of how to the artists
themselves, I shall consider here two component questions, namely What has taken the place of traditional religion
in contemporary society, and how might this influence our understanding of
heaven and hell? and Who, in the
place of “God”, is the judge? 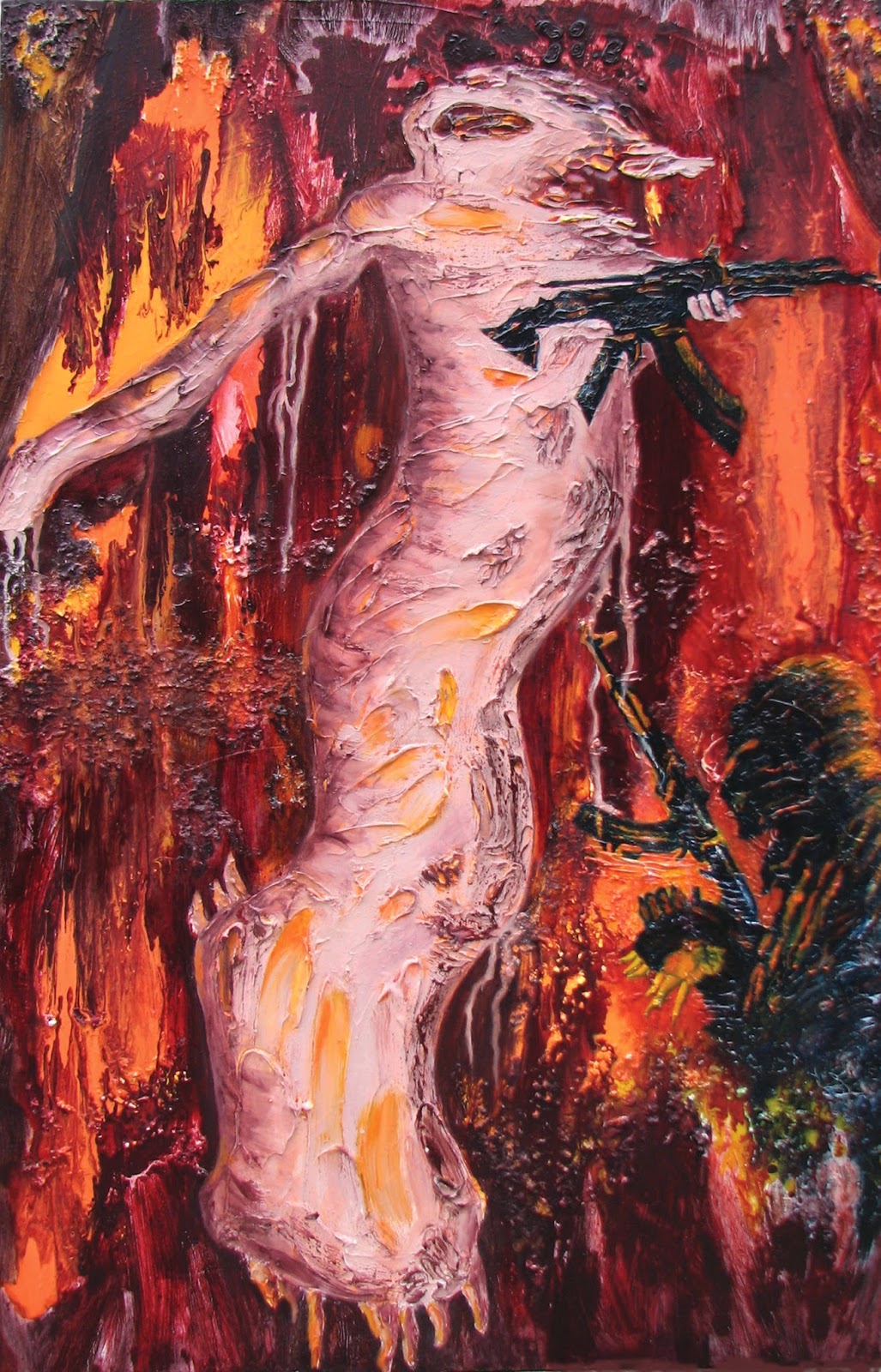 Stephen Hawking recently gibed that science has killed
philosophy, but, as postmodern sociologist of science Steve Fuller points out, science, politics and
religion were originally all related branches of one and the same search for
and love of knowledge and wisdom – aka philosophy.[i]
The scientific method was developed in the 17th century by
philosophers who were dissatisfied with settling for plausibility over
factuality. These days, however, the disciplines have diverged such that they
are seen to be almost wholly incompatible with one another, and, in many cases,
even to cause wars. Religion battles religion; religion battles politics; and
religion battles science. 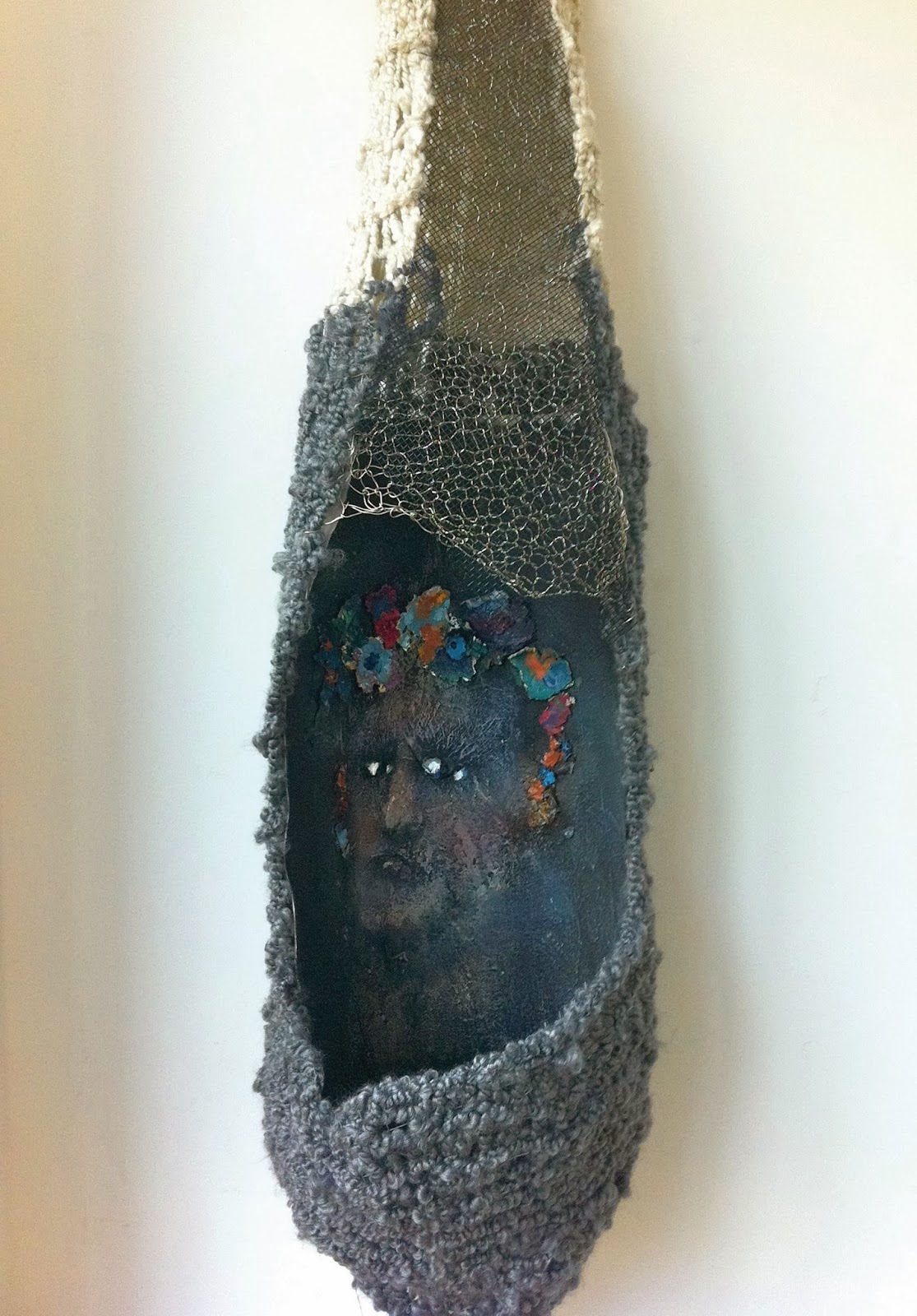 Freud argues that religion, and the belief in an
afterlife, is nothing more than man’s attempt to alleviate his fear of death
and nothingness. But, things are no longer so black and white, since human
“progress” has rendered us able to intervene into this crossing between life
and death, with modern medicine able not only to prolong life artificially, but
also to bring people back from the dead. Science has, in this sense, superseded
religion. Doctors are often thought of as gods, following the Galenic tradition
whereby nature is seen to cause disease, and the doctor is the hero who steps
in to bring about a cure. But they cannot cure everything. And, especially in
the case of mental health, it is not they who effect the cure anyhow. They may
well help, and guide patients in times when they cannot guide themselves, but
no one but the patients can bring about their own recovery. In the heaven and
hell of the mind, it is each person who creates, experiences, and judges, and
furthermore only he who can rescue himself. Illnesses develop because people
feel they cannot live up to contemporary ideals. In a consumerist world where
we expect our wants and needs to be met immediately, where celebrity status and
superficial ideals hold sway, there is a proliferation of dissatisfaction; a
scourge of disillusionment; an epidemic of breakdowns, eating disorders,
depression and addictions. 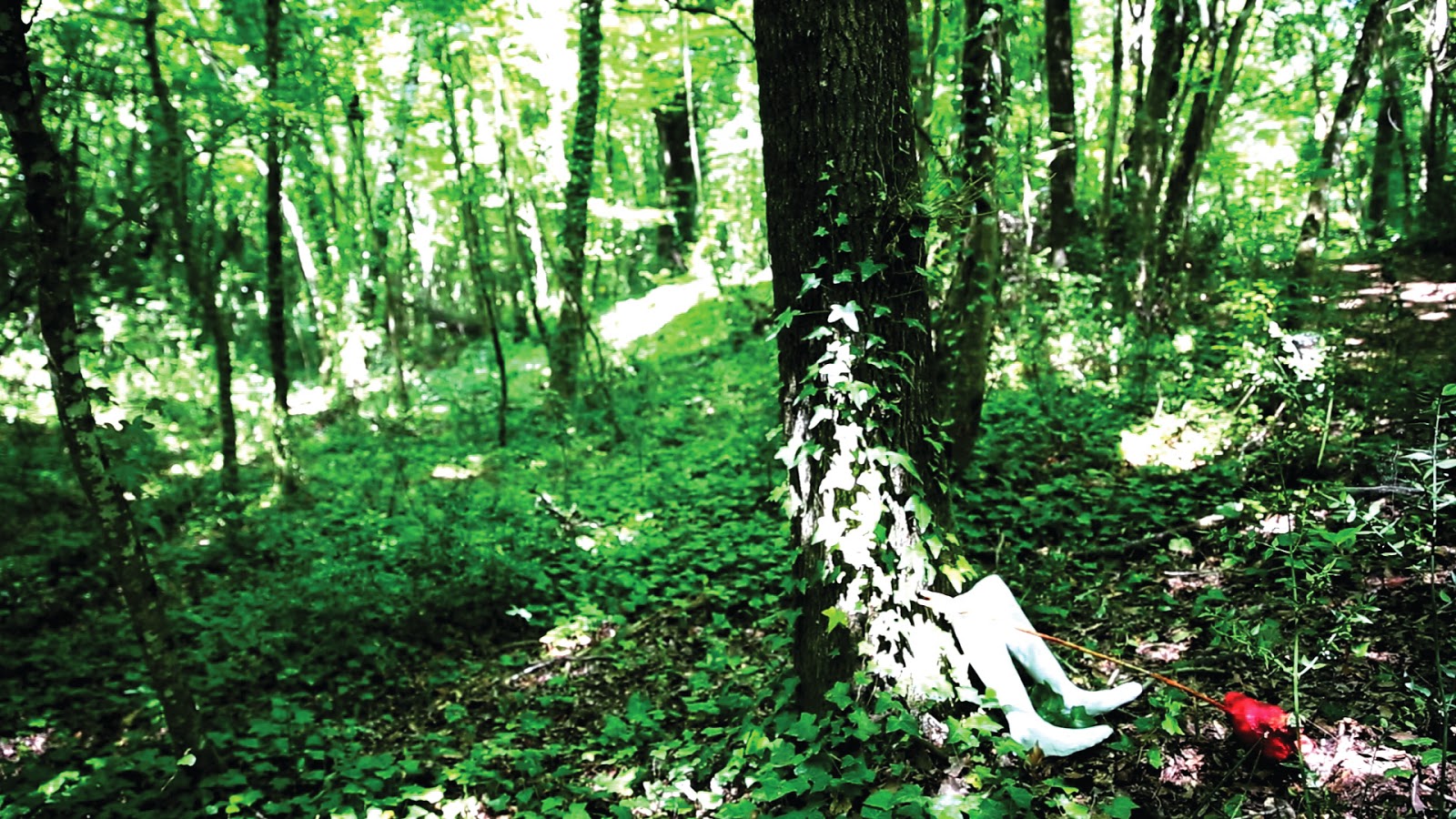 The more science “progresses”, and the more man can defer
death and take on the role of the divine, the more hellish the potential of his
own life becomes.

The individual, ultimately, is the judge of his own life and
deeds. In a cycle of never-ending, seemingly pointless suffering, a Sisyphian
struggle, contemporary life can become hell on earth. “Would not a medieval
European peasant,” the curators’ musings continue, “if she were to look at our
brimming supermarkets, our hospitals and clinics, our clean cities and well
fed children… would she not think that she was already in heaven?” Well, I
would counter, is heaven really when we have all that we want and
continually get our own way? Instinctively, many might think that it is, but, throughout
tradition, stories have warned of those with power and privilege misusing it in
this life, falling foul of hubris, and then being punished in hell in the next.
Perhaps not too much has changed? Those who get too much of what they want
today fall foul of their own increasingly insatiable hungers and are left
perpetually dissatisfied and in a form of living purgatory or hell. 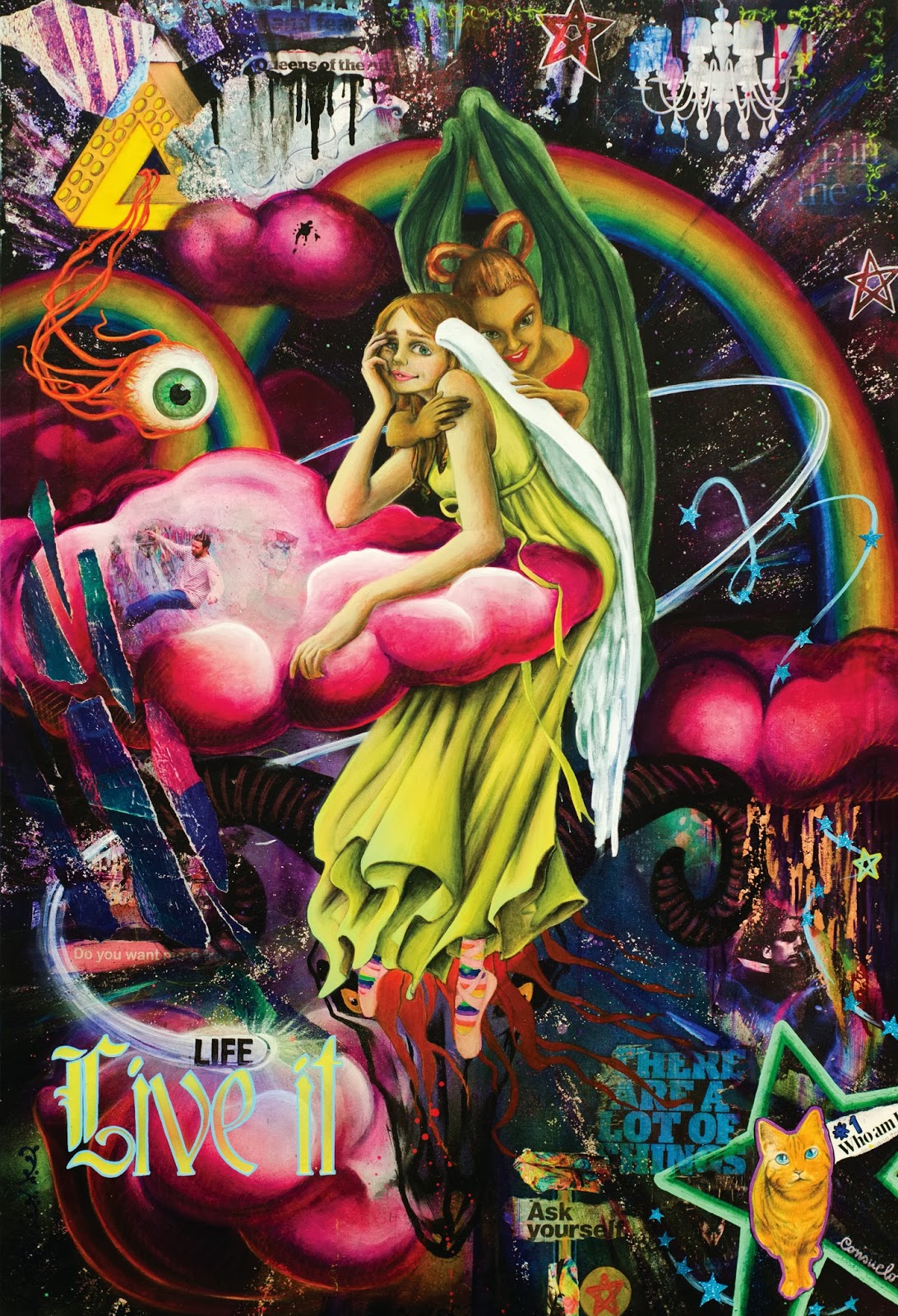 Finally we come to the question of who, in the place of God,
arbitrates as to what is good and bad? If each person is his or her own judge,
how, coming back to the case at hand, are viewers meant to evaluate the art in
this exhibition? How are works as diverse as video pieces (Nicca Iovinella and
Suokwon Yoon), paper sculpture (Sher Christopher) and mixed media installation and
collage (Edu Luna, Consuelo Celluzzi, Christopher Ward and Carlos Molina) to be
considered alongside works from the more traditional schools of painting (Jamie
Chapman, Robert Fitzmaurice, Annie Zamero and Trinidad Ball), sculpture
(Lucretia Allan, Beth Gadd and Elspeth Penfold) and drawing (Julia Tester)?
Grayson Perry touched upon this question in his recent series of Reith Lectures
for BBC Radio 4.[ii] He proposed
a number of contemporary art world judges: the collector, the curator and the
critic to name but a few. As Elspeth Penfold notes, however, relating to her
collaborative installation piece, Cocoons,
when it was previously installed in an exhibition at the Bussey Building,
Peckham, it caused varyingly both discomfort and pleasure. This reinforces precisely
the point already made. If there is no overall judge, or no established
doctrine any more, who is to say what is right and wrong, good and bad? Each
person is his or her own judge; each viewer must have his or her own individual
response. 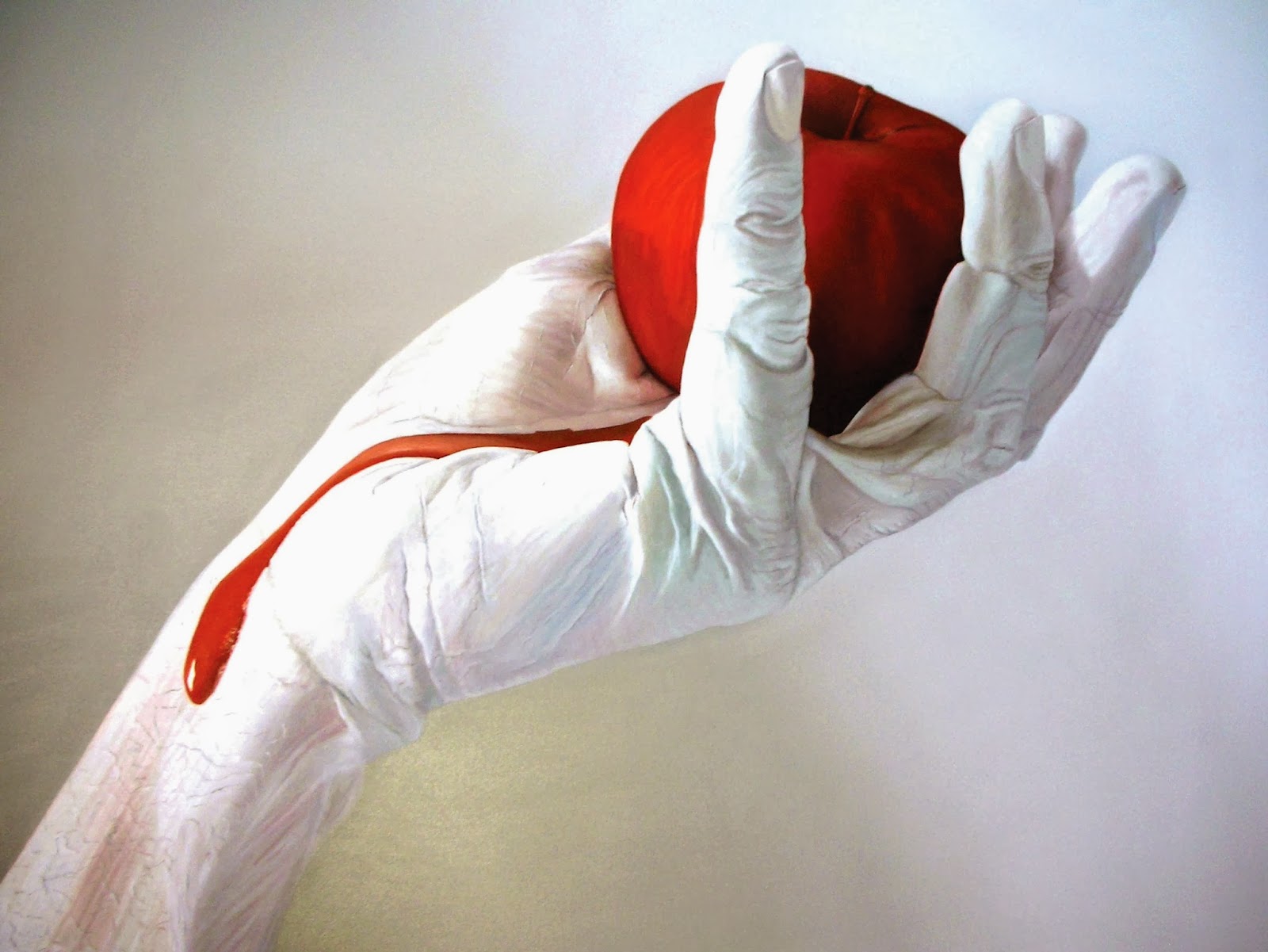 And this freedom is not necessarily a feature of heaven. If
there is no correct way of doing things, and no good or bad taste, how can we
ever be released from the hell of uncertainty? The very fact that in looking at
these works we do not know immediately if they are worthy or not, and cannot
immediately recognise motifs of heaven or symbols of hell, but, instead, are
forced to think and engage in some conceptual dialogue and judge for ourselves,
is a chaste reminder of just how much we do now live inside our own heads. And
as John Milton presciently reminded us: “The mind is a universe and can
make a heaven of hell, a hell of heaven.”[iii]

Oil and acrylic on canvas

Not in Safe hands