“When Marc Chagall arrived in Paris for the first time in
May 1911, he was a wide-eyed, aspiring young art student, eager to establish
himself in the capital of the Western art world. By the time he left, in the
late spring of 1914, […] he was an accomplished and mature artist, producing
some of the most memorable images of the early twentieth century.”[1]

Tate Liverpool’s current exhibition, the first major showing
of Chagall’s works in the UK for 15 years, focuses primarily on this pivotal
period of his career, as well as following him back to Russia in 1914, where
his intended three month stay was extended to eight years due to the outbreak
of the First World War. Having always loved Chagall (1887-1985), since he
became the subject of my first artist case study when I was just 15, it is
really a joy to see such a focused but rich selection of work from his time in
Paris, where he experienced European modernism’s “golden age”, carefully
curated so as to show just how much he was influenced by a number of movements
and schools, including fauvism, cubism, orphism and neo-primitivism, whilst
maintaining throughout his own persistent style, profuse with recurrent motifs
from Jewish folklore, and his own recurring characters such as the dreaming
poet, the goat, and the green-faced fiddler. 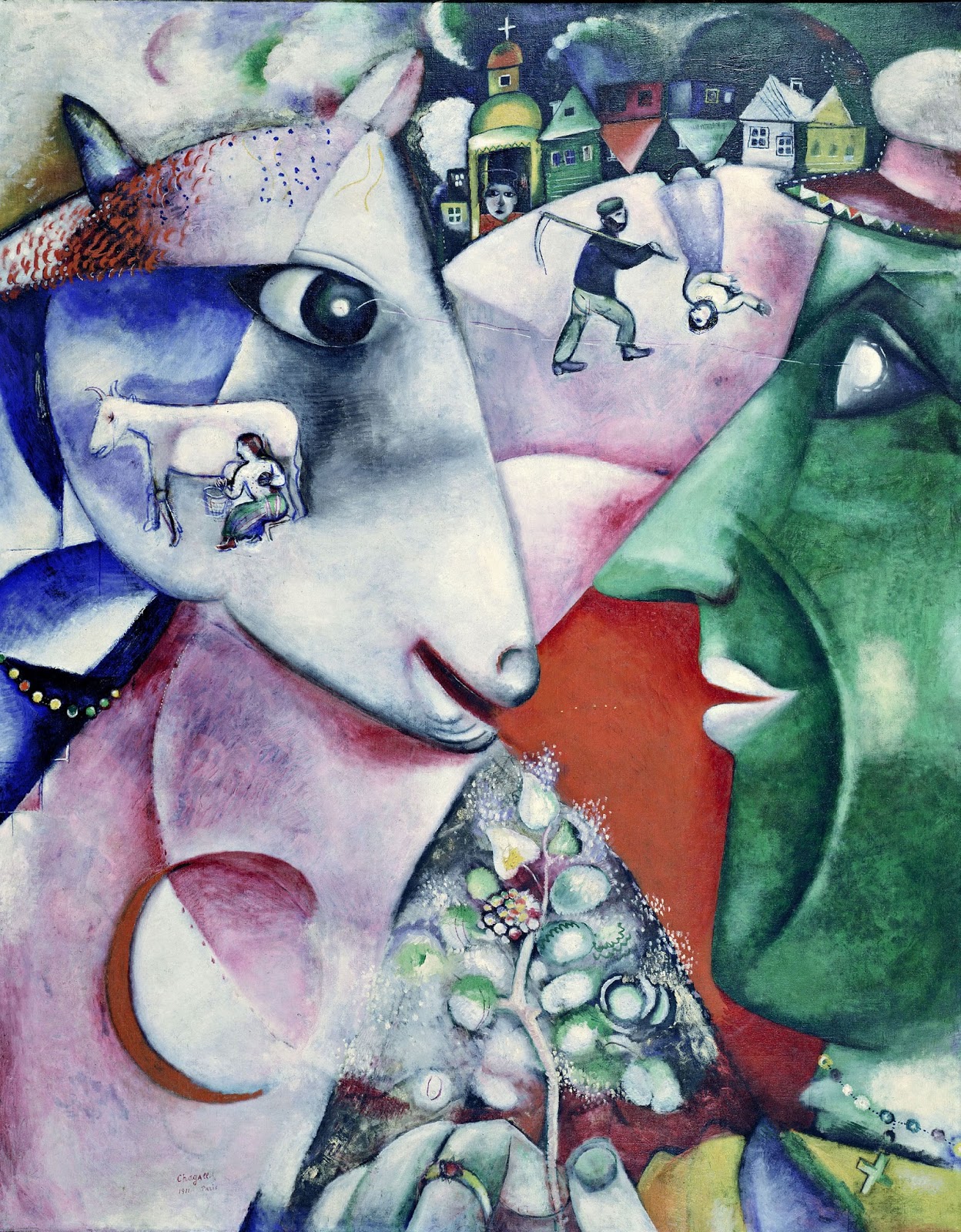 “Chagall believed that art’s primary function was to
interpret the world through iconography and allegory.”[2]
His liberal use of metaphor is what imbues his work with liveliness and
idiosyncrasy, and, even as we see him absorb and incorporate elements from the
movements around him, everything is filtered and adapted to suit and express his
own internal language and dreams. An anti-intellectual, Chagall had no ties to the
ideologies behind the movements in which he was caught up. “If I create from
the heart, nearly everything works,” he wrote in his biography, My Life, “if from the head, almost
nothing.” Evidence for this is abundant in this exhibition. For example, whilst
colour certainly flooded into his work upon his arrival in Paris, as can be
seen clearly in The Green Donkey
(1911), one of his first paintings from France, as well as in the striking
contrast between the two paintings by the title of Birth, a dull, muddy one from 1910, before leaving St Petersburg,
and an altogether more cheerful, pink-hued one from 1911, upon arrival in
Paris, Chagall himself is quick to point out that it is not just French
artistic influence, but rather love, which selects his colours for him, leaving
him only to apply them to the canvas.

Apart from the influence of the different movements with
which he came into contact in Paris, Chagall also learnt from other sources
during his time there. One of the highlights of the exhibition is the inclusion
of a number of naïve and energetic, contortedly cubist, primitive and yet
alluringly sexual gouaches, painted by Chagall when attending his first ever
life drawing classes as part of the Salon Cubists. A response to real life
models, these are very different from his usually densely populated, imaginatively
created scenes, and quite a gem to behold. 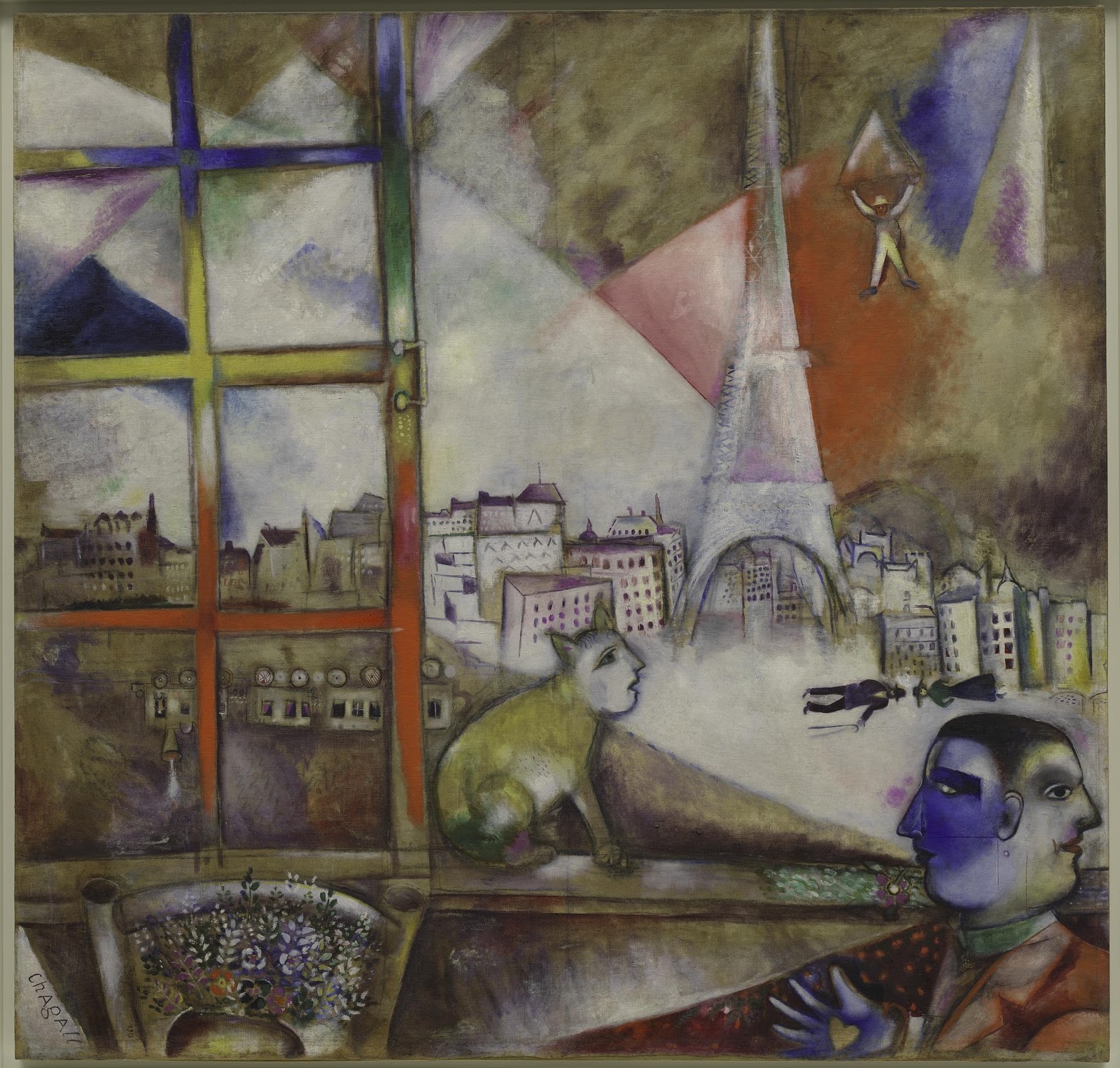 After a room full of the joys of Paris, the exhibition takes
us back, with Chagall, to his native Russia. Here he produced a series of
smaller, muddier, more naturalistic works, echoing the poverty of the war-torn
state of his hometown Vitebsk. One stunning brighter work from this period,
however, is Jew in Red (1915), which
is one of a number of works he produced purportedly assuaging his urge, in
response to the many Jewish refugees from Lithuania passing through the town,
to “keep them safe… by putting them all in my canvases.” There are also
numerous happier pieces from these years celebrating his love for Bella, his
long-term sweetheart, whom he married on 25 July 1915, and with whom he shared
enduring romance and passion until her death from a viral infection in 1944. 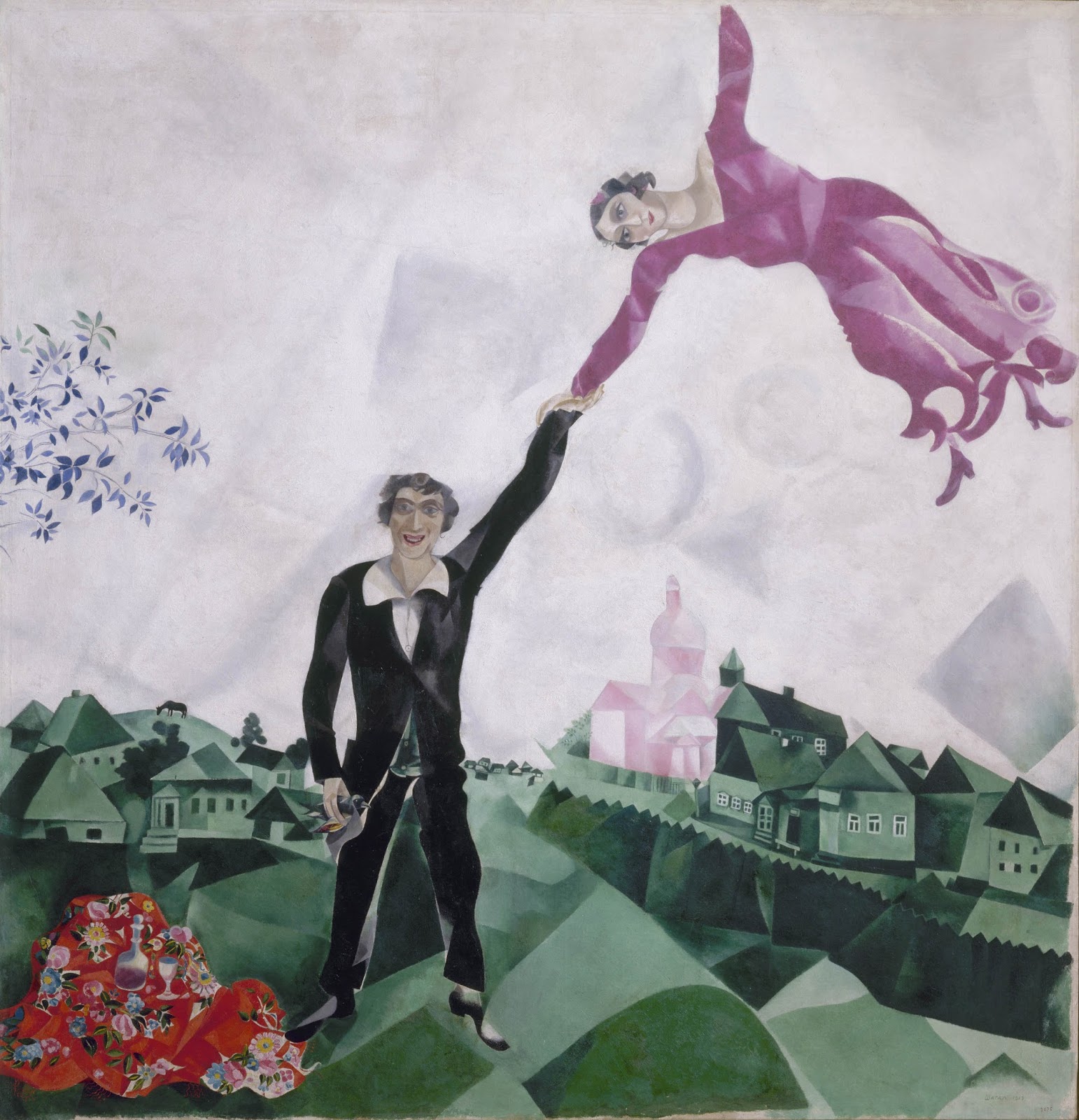 Chagall had always been a fan of the circus and the theatre,
and back in Russia, he had various theatre and stage-set design commissions,
culminating, in 1920, in a month-long project to produce murals for the
interior of the State Jewish Chamber Theatre in Moscow. Seven monumental wall
panels are included in this exhibition: Introduction
to the Jewish Theatre, Music, Dance, Drama, Literature, Love on the Stage,
and The Wedding Feast. Replete with
characters from the plays of popular contemporary writer, Sholem Aleichem,
alongside Chagall’s own characters, including his ubiquitous floating lovers,
goats, fiddlers, rooftops, ladders and cockerels, the theatre became nicknamed
“Chagall’s box”, and the murals are described by Tate as a “manifesto for
Chagall’s deliberately hybrid aesthetic” – a fitting tribute to the crowning
works in a show which has walked us through the many influences playing their
part in the creation of this very aesthetic.

The final room of the exhibition is tantalisingly designed
to offer a glimpse of Chagall’s later works, with six bright and exuberant
paintings from the 1950s and 60s when he was living in the South of France with
his second wife, Vava. More like the typical Chagalls we know and love, these
works overflow with his use of symbols and icons, and bear all the more meaning
as a taster of how his trenchantly personal and distinctive style flourished,
fully imbued with the features it had acquired during those earlier years. Anyone
leaving this exhibition without a hunger for more of this inspirational vibrancy
and joie de vivre can simply have no functioning appetite at all.

I and the Village

Paris Through the Window