Francesco Jacobello was born (1970) in Militello, Val Di
Catania, Sicily, a UNESCO World Heritage “monument”. As such, the artist, now
based in London, and currently working with Debut Contemporary, explains that
almost as a matter of course his path was set to become an artist. “It was
impossible to avoid all that flavour of the Greeks, Romans, and the Classical
Italians. I cannot ignore more than 2000 years of Art History,” he says. 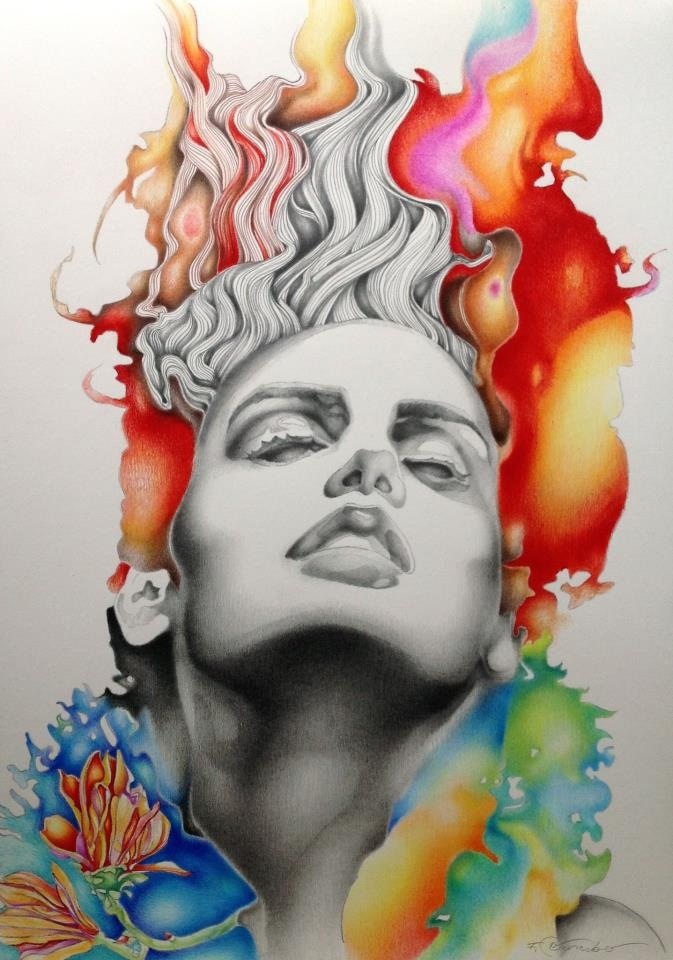 Nevertheless, Jacobello is largely self-taught. Having
failed to get into any of the over-subscribed local art colleges, he studied
ceramics in Caltagirone, another small town near to his birthplace, consoling
himself that any knowledge of art and its techniques would be useful. And,
indeed, his time there allowed him to make some important contacts, and, by the
time he graduated, he was already winning competitions – but not for his
ceramics. His early love for drawing persisted, and it was – and is – in this
field that Jacobello excels.

His current series, Graphitology, named after his ongoing
study of the material, uses pencil and pastels to almost sculptural effect.
Jacobello’s work combines the classic and the contemporary, as he sets Grecian faces
within modern contexts. His aim is always and simply “to create something that
actually excites me when I’m working on it.” At least 30% of the idea is there
when he begins, but each work is an adventure with its own personality, and Jacobello
works diligently for 10 hours a day, with an average work maybe taking him a
whole week to complete. 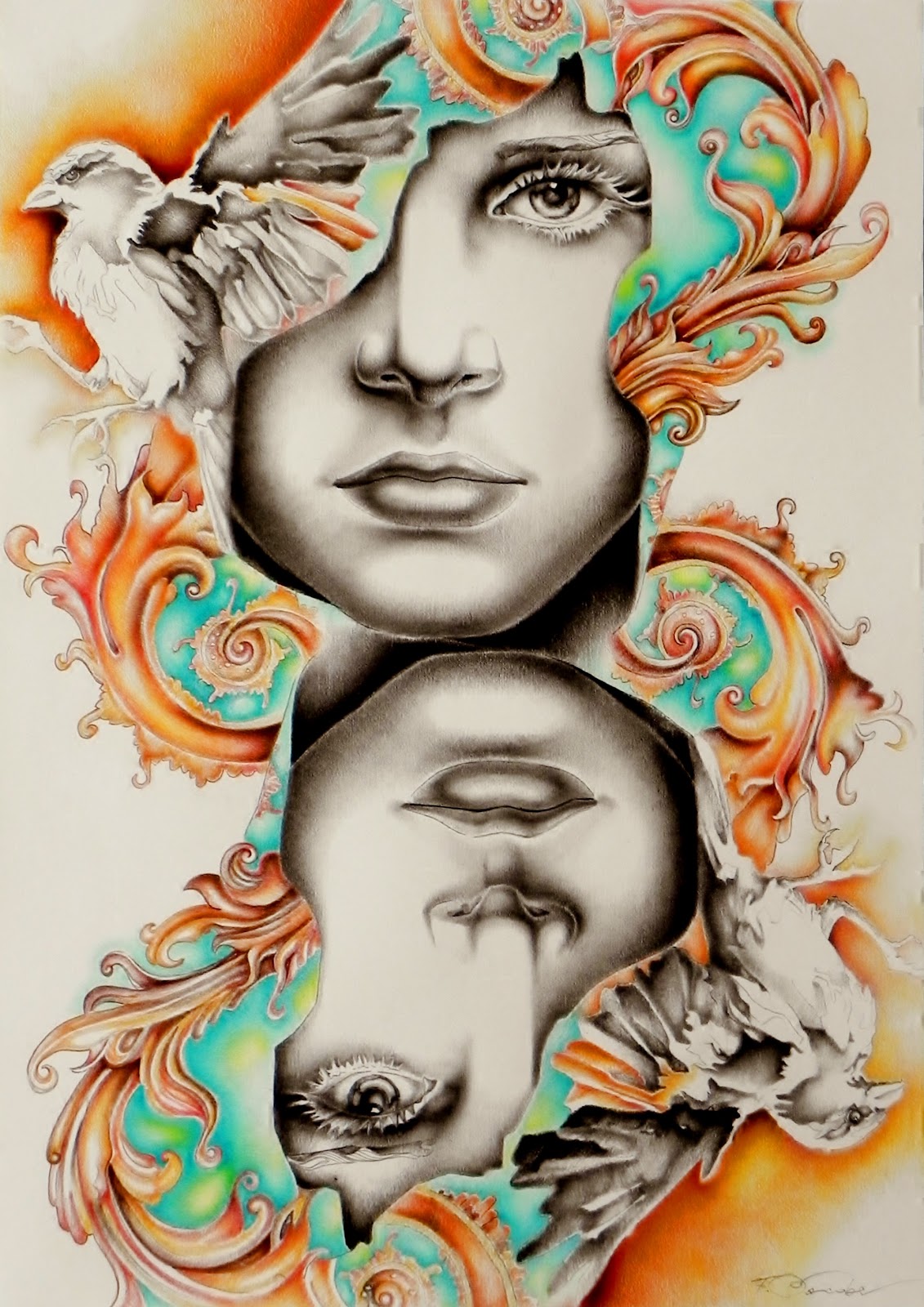 Building up layers and sections, Jacobello usually begins
with the pencil drawn face, since that’s “the powerful part of the work,” and
then adds in the coloured pastel background using carefully researched elements
that have a relevance to the subject at hand. He is fond of the use of symbols
and likes to incorporate elements of nature as well. His works spill over with
majestic birds, fruits, berries, and flowers, each drawn with the minute
accuracy of a nature study.

Jacobello’s work is also recognisable from his use of
mirroring and symmetry – “another way of making the classic more contemporary.”
In most pieces produced over the past two years or so, there is not just one
face, but its reflection as well. Again, as if this were to be expected,
Jacobello explains: “You’re never alone: there’s always two of you. If you look
in the mirror, you you’re your reflection. Wherever you go, you have your
shadow.” 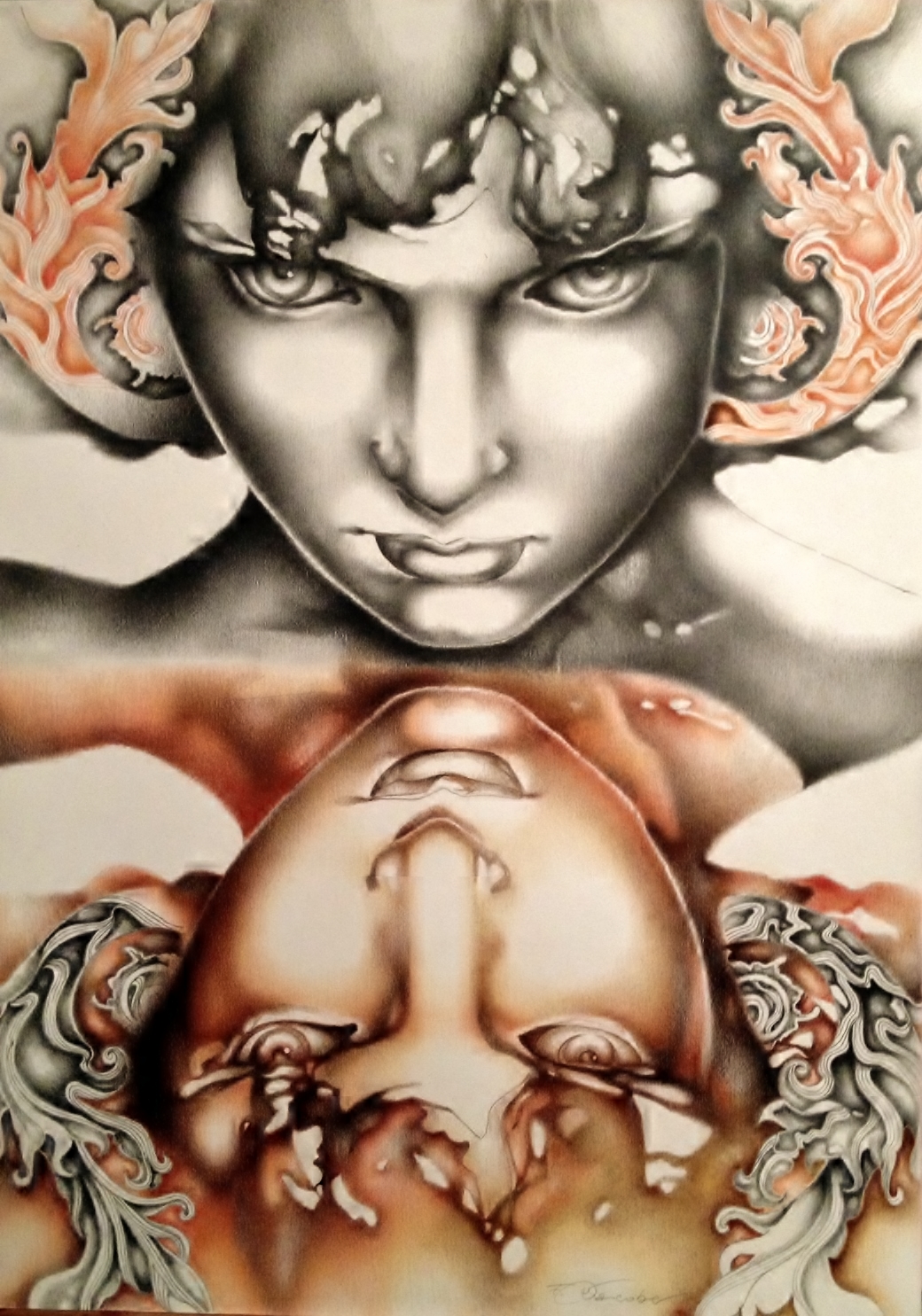 Jacobello works primarily from photographs since his method
is so meticulous and slow that the sitter would, he suspects, get bored. He, on
the other hand, doesn’t get bored, but he does get tired. He also confesses
that his mind is faster than his technique, and that he’s always projecting
ahead to new ideas. Accordingly, he tends to work on more than one piece
simultaneously. Alongside his Graphitology series, therefore, Jacobello is
currently also working on a series entitled Ritratti Scritti, or Written
Portraits. For these, whilst it might be scarcely credible at first glance, he
is using what he terms his “forte”, namely black biro. “It gives a very distinctive,
contemporary feel to the drawing,” he says, or, as Samir Ceric, Founder and CEO
of Debut Contemporary, puts it, “an attractive urban edginess.” 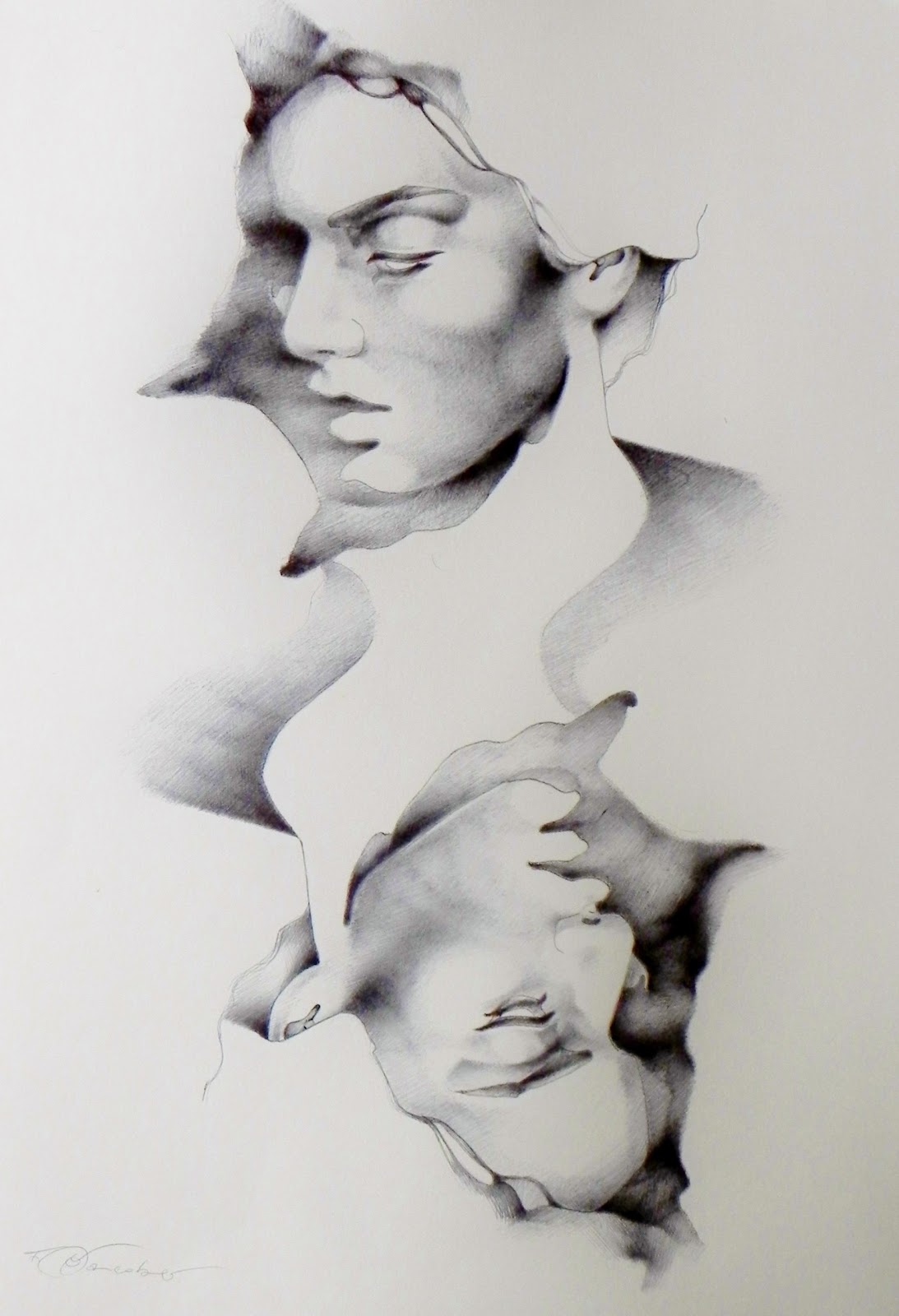 “It’s a big challenge,” adds Jacobello, “since you cannot
afford to make any mistakes. But I love challenges. I am into the wow effect.
I’m after my work being stunning. I don’t do lovely.”

Jacobello tries to produce at least 20 works per series
before moving on. “You grow with a series as an artist. You perfect your
technique. It’s part of you.” His current two series have more than this number
in each already. For now this work, and his work with Debut Contemporary,
remain his focus, but he also has forthcoming shows in Italy and Canada to
prepare for. 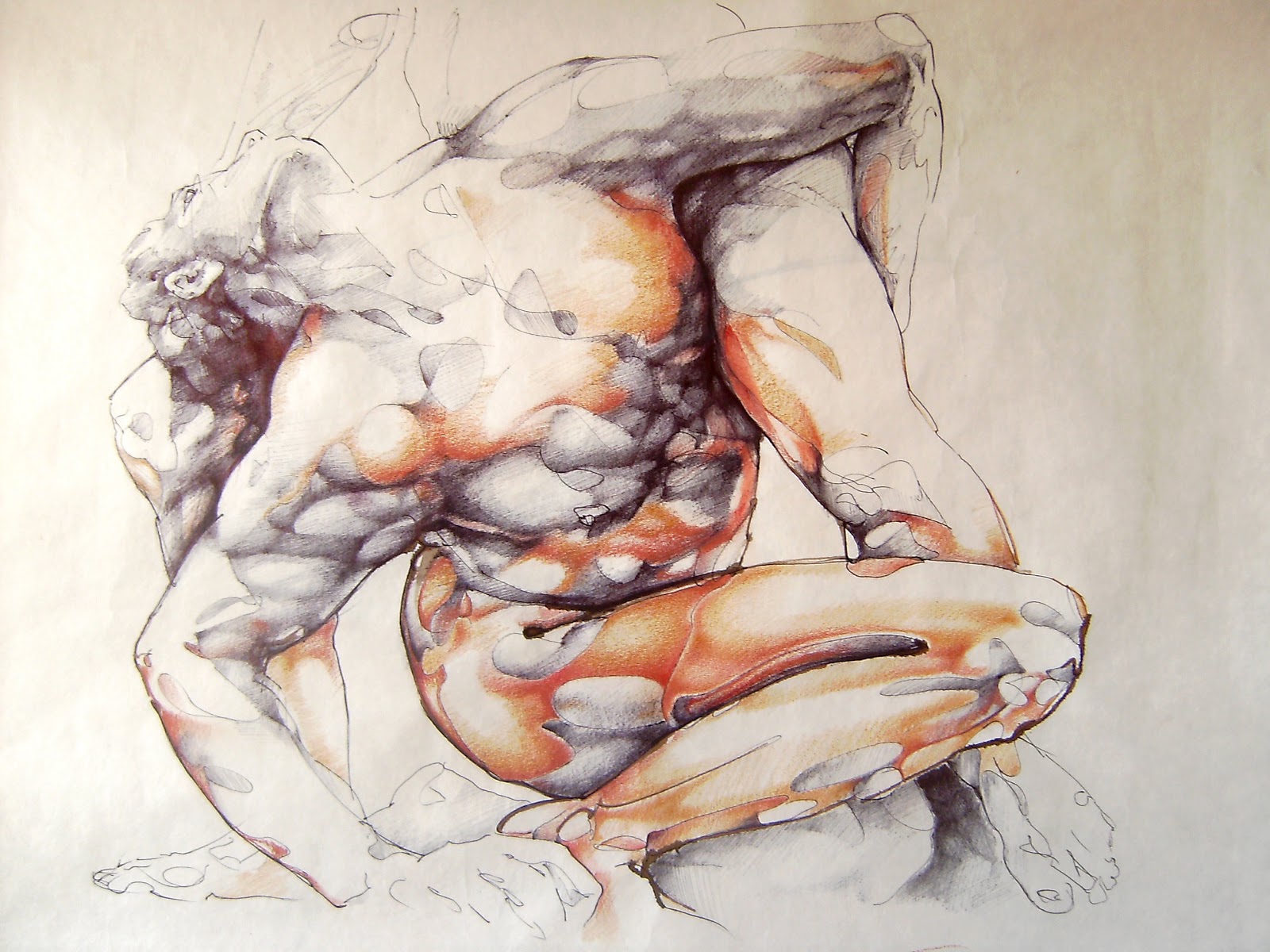 “I am proud of what I do,” says Jacobello. “I believe in my
work. I know I’ve got potential.” With the support of his gallery, and a number
of convinced jurors and critics, it would seem that he is not alone in this
view. 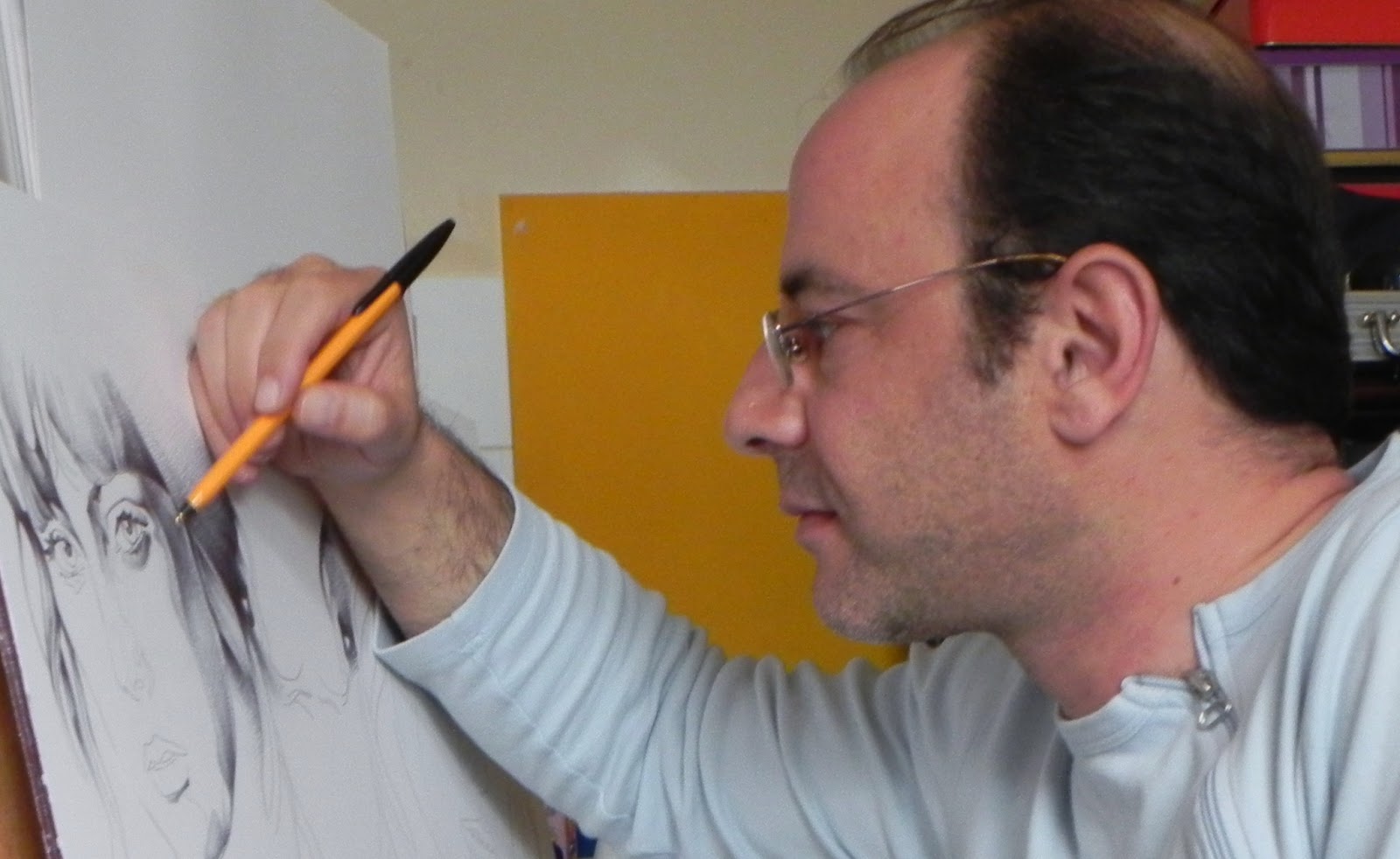 Jacobello will be appearing in Debut Contemporary’s window
on 18 May as part of their Saturday Debut programme, providing people with a
chance to watch him as he works.

For further information, and to follow Jacobello as he
works, see his blog: