Review of Movement and Gravity: Bacon and Rodin in Dialogue at Ordovas

Movement and Gravity: Bacon and Rodin in Dialogue

Ordovas, located on Savile
Row, just opposite the somewhat brassier Hauser and Wirth, might be listed up
there amongst my favourite galleries. Its small but delightful exhibitions are
always meticulously researched and put forward fascinating new theses, each showing
the influence of an old master painter or sculptor on a modern or contemporary
artist. Its current offering does not disappoint, juxtaposing three bronze
casts by Auguste Rodin (1840-1917) with three paintings by Francis Bacon
(1909-1992). 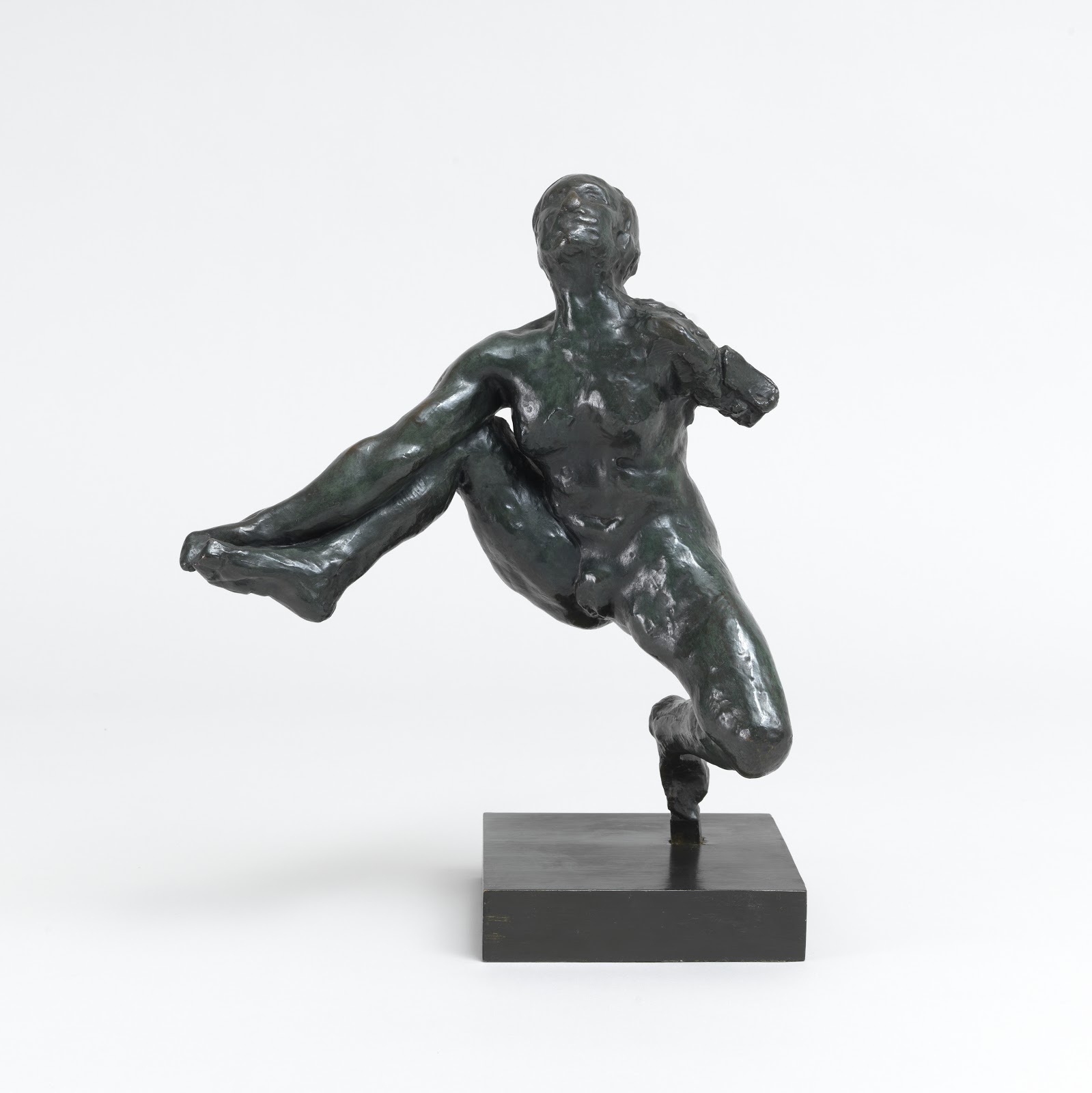 Rodin, whom critic and
curator Catherine Lampert has described
as “a modeler and an interpreter of the afflictions of modern society,”[1]
and of whose sculptures the German poet Rainer Maria Rilke said: “Never was
the human body so bent by its own soul,”[2]
sought to infuse his contorted yet beautiful works with the new psychology of fin
de siècle France. “The
sculpture of antiquity sought the logic of the human body. I seek its psychology,”
he stated.[3]
In a similar way, Bacon has been described by the novelist Anita Brookner as the “post-Freudian painter of trauma,” and said of
himself: “I would like, in my arbitrary way, to bring one nearer to the actual
human being.”

The painter’s high esteem
for his predecessor was well known, and, upon moving to St. Ives in 1959, Bacon
was overheard in conversation with fellow artist, Brian Wall, asking
what it was he did. When Wall politely replied that he was a sculptor, Bacon’s
sharp-tongued retort was: “How interesting, actually there are only three:
Michelangelo, Rodin and Brancusi.”[4] 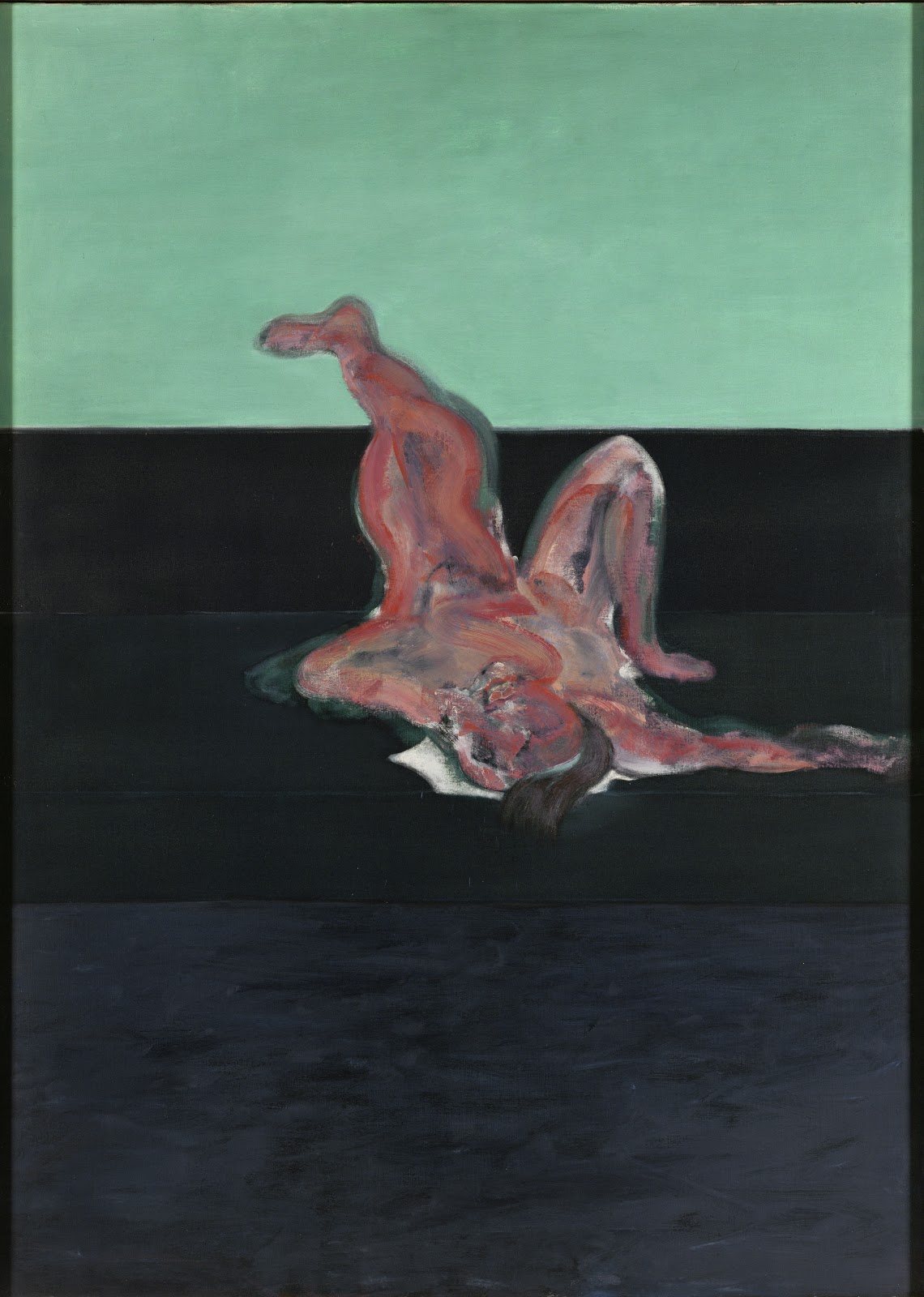 It was during his period in Cornwall that Bacon produced a
series of five paintings of lying, reclining and sleeping figures, four painted
in 1959 and one in 1961, each depicting an inverted nude, lying on a couch,
with one leg raised and the other bent at the knee, the right arm outstretched.
One of these, Lying Figure (1959), is
on show here, and can be admired for its dynamic portrayal of movement – through
vigorous brushstrokes and blurred features – typical of Bacon’s style. More
fascinating, thanks to their being brought together by the curators of this
show, however, is the direct comparison of Bacon’s painting with what might be
described as Rodin’s most overtly
erotic sculpture, condensed down to just its sex, Iris, messagère des dieux (1890-91). Further
juxtaposed here beside a contemporaneous cast, Iris, étude avec tête (1890-91), perhaps an earlier version, before
the genital region had become the focus, and before the body had been
decapitated, the similarity between the two artists’ models’ poses is
undeniable: Lying figure is Iris inverted. 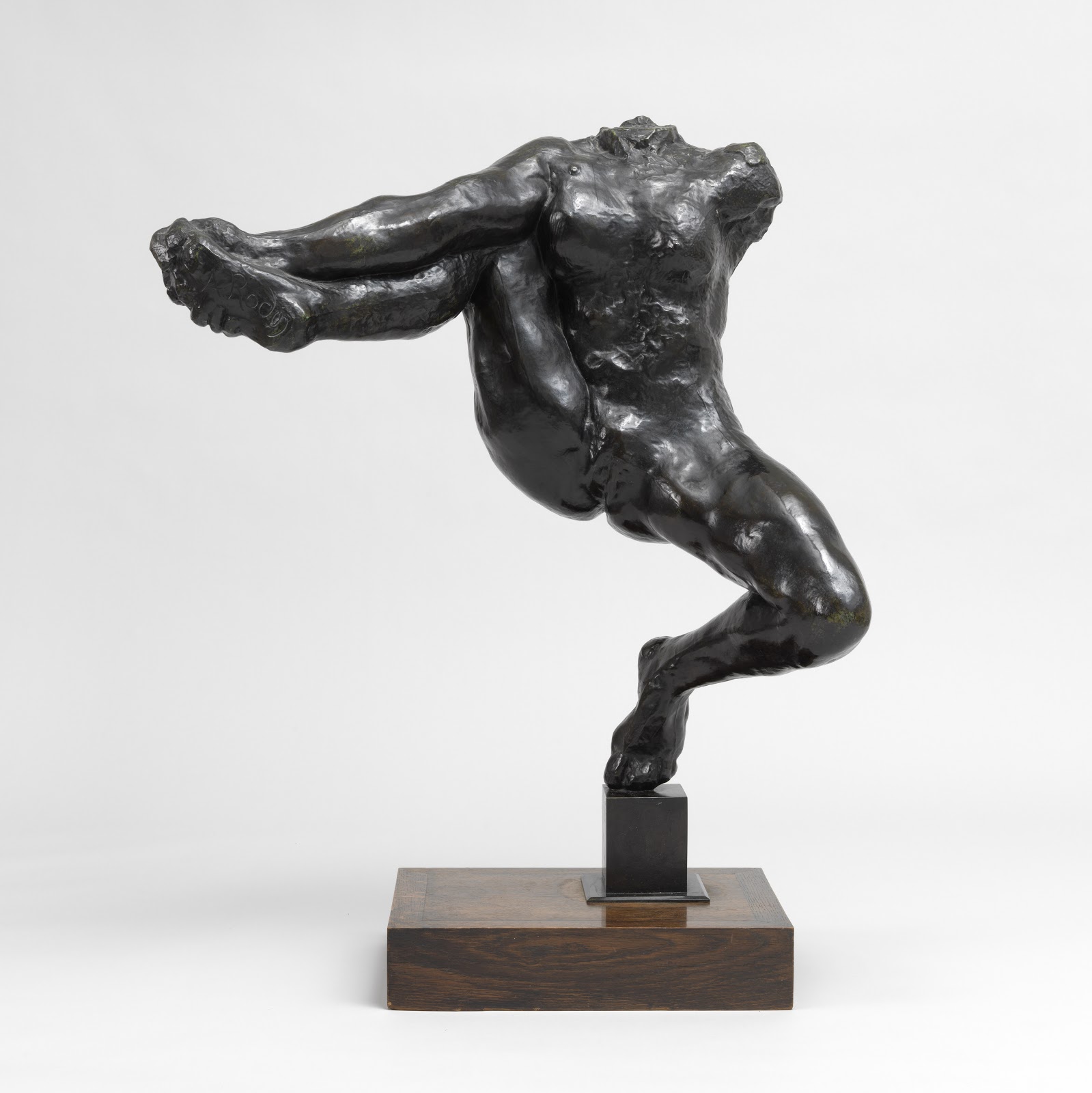 There is evidence too, that Bacon, who was notoriously
reluctant to share his sources, did in fact look to Rodin’s work when painting
these lying figures. He left margin notes in copies of V.J. Stanek’s Introducing Monkeys, ca. 1957, reminding
himself to “use figure volante of Rodin on sofa arms raised” and “Figure as
Rodin figure on sofa in centre of room with arms raised.”[5]
His friend, Eddy Batache, suggests, however, that Bacon was confusing this
other work by Rodin, Figure volante,
with Iris, messagère des dieux,
which he was known to admire, and which would fit the bill much more aptly.[6] 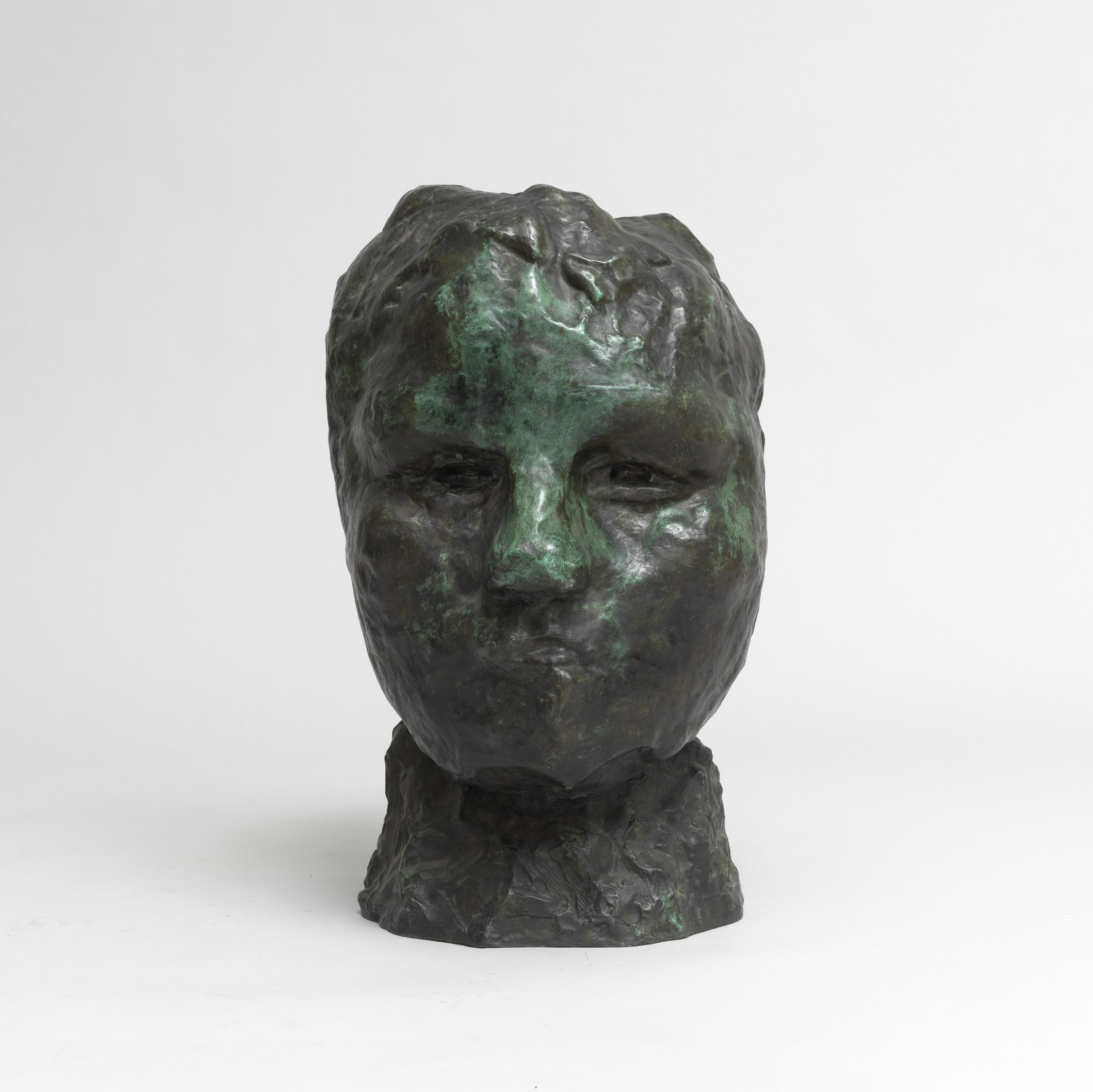 The third cast by Rodin on display in the exhibition is Iris, grosse tête (1890), indeed a
magnificent and enormous hulk, with its nose approximately half the size of my
hand. It is imperfect but beautiful, its mouth slightly misshapen, a sharp line
of cheekbone, a heavy brow conveying a real sense of weight, and visible tool
marks, akin, in vigour, to Bacon’s brushstrokes. This piece is contrasted with
the painter’s disturbingly unflattering Miss
Muriel Belcher (1959), a “portrait”, if it earns that accolade, where his
rough brushstrokes predominate, and the side on head fills only the bottom half
of the green canvas – an intriguing use of space. 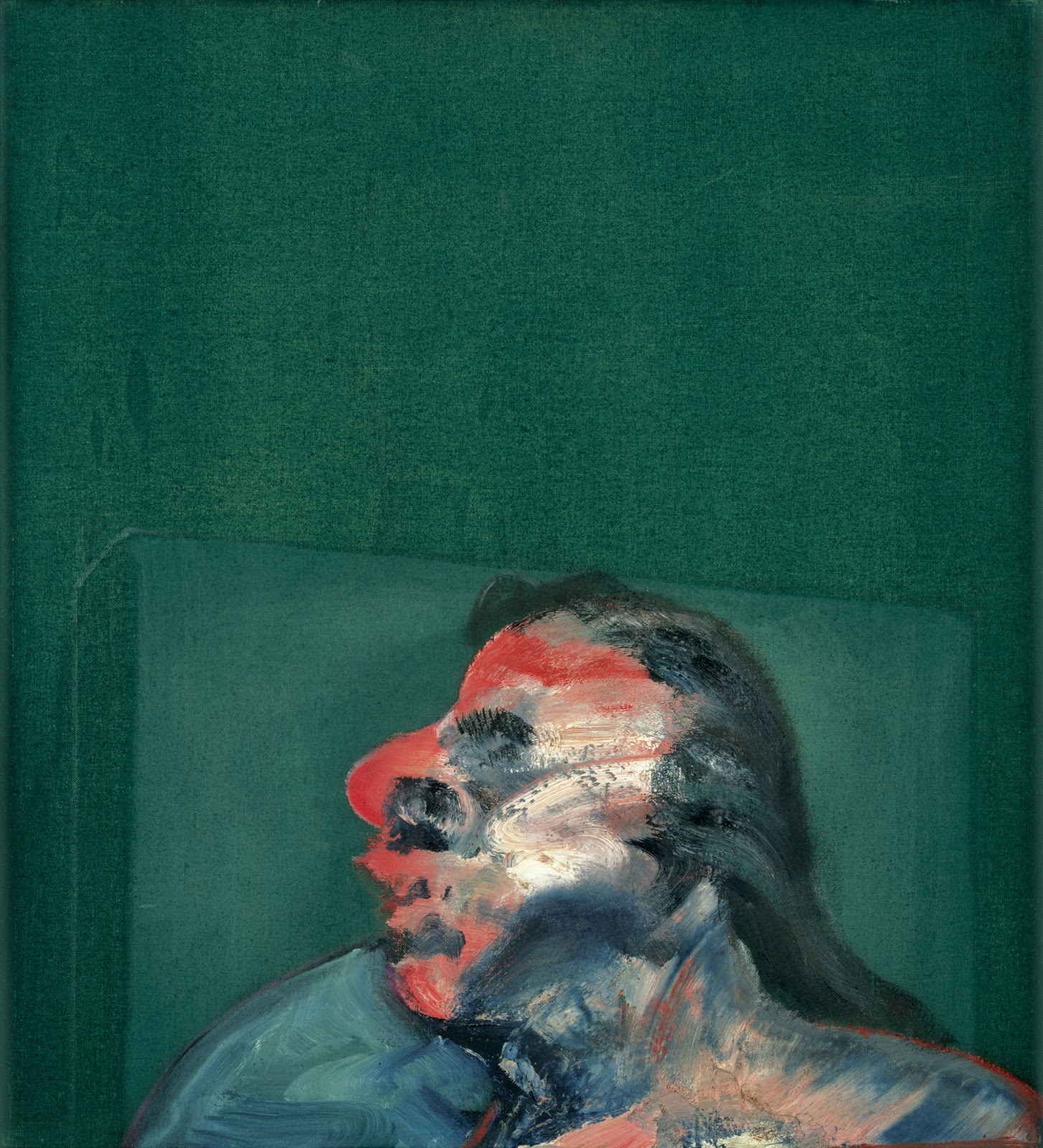 The final work on show is Bacon’s Three Studies from the Human Body (1967), seen here for the first
time in London. Extolled in the gallery material for being the only Bacon
painting which can be said to show anything approximating the weightlessness of
Rodin’s seemingly suspended bodies, Bacon himself reportedly told the writer Hugh
Davies that “these were almost sketches of three figures that happened to occur on the same canvas.”[7]
As such, I don’t think much weight can be placed on the composition itself, but
each figure taken alone certainly has its own merit, and it is a neat feature
that the gallery has also found and displayed the photograph of a young French
boy “joue au singe”, hanging from a branch in the Ivory Coast, from a 1959 copy
of Paris Match, again an almost exact
match to the topmost figure in Bacon’s painting, even to the extent that his head
is slightly blurred from movement, which may explain why Bacon’s rendering is somewhat
“squashed”. 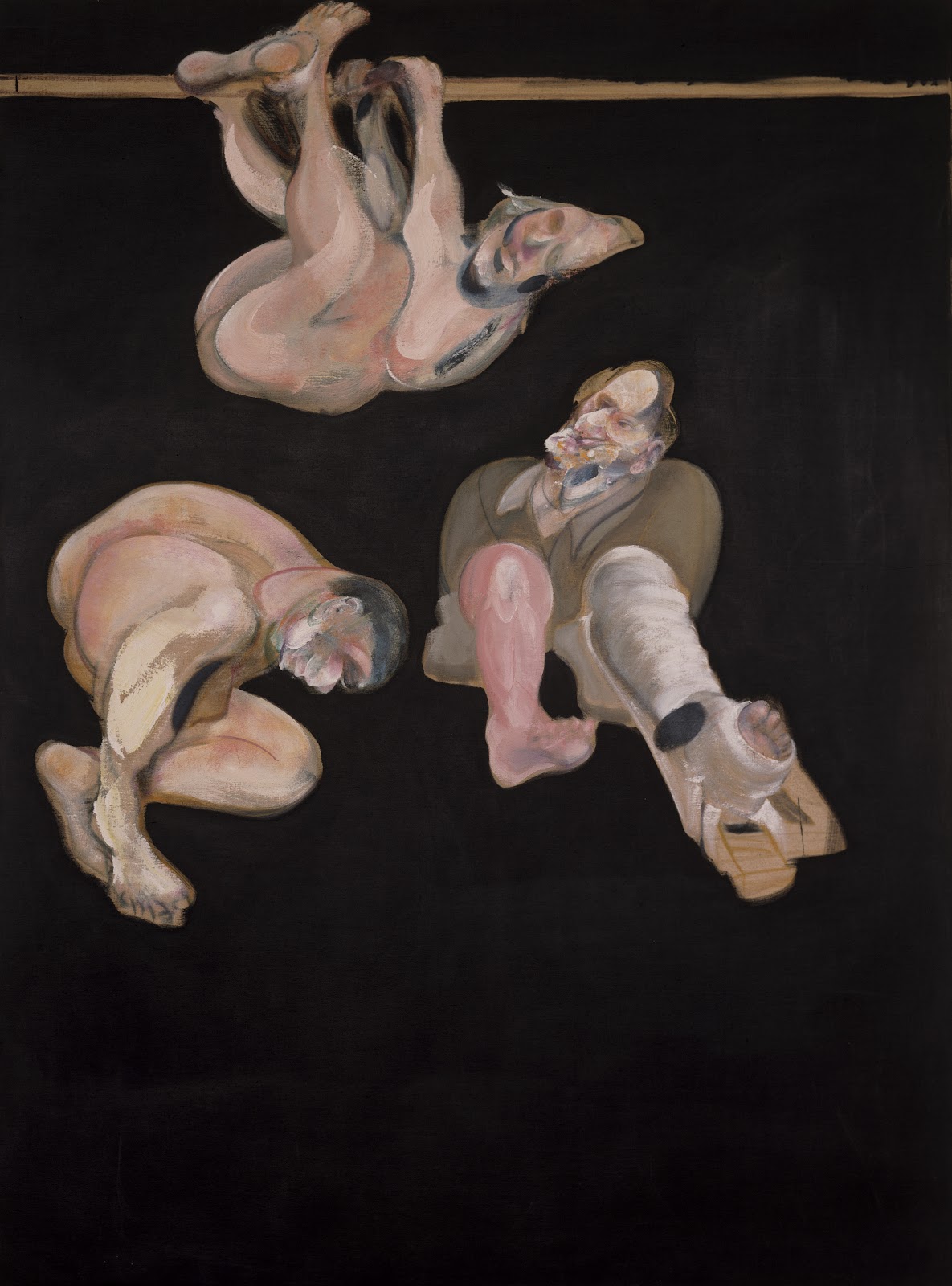 The one dressed figure on the canvas, itself painted a deep
and absorbing black, has his left leg in plaster and mounted upon a splint –
presumably something taken directly from one of the many medical text books
which littered Bacon’s studio as source material. A keen student of
pathologies, this might be added as another commonality shared with the turn of
the century sculptor, whose ties with
the intellectual circle of the time would have afforded him exposure to the developing
medical discourse on hysteria, which certainly informed a large number of his
sculpted poses.

Overall,
the exhibition captures both artists’ experimentation with movement, pathology,
and psychology, or, rather, the revelation of the psyche, and the portrait of
the soul, as opposed to the external. Where Bacon has borrowed directly from
Rodin, he has rendered the pieces, quite reverentially, in his own unique way,
with brushstrokes and vivid colours in place of tool marks and breathtaking
sexual audacities. “Art can only
emerge from inner truth,” said Rodin. “May all your forms and colours express
feelings.”[8]
And this utterance might just as well apply to Bacon’s works as to his own.

Performances of a special
commission by choreographer Joe Moran, responding to the works in the
exhibition, will take place in the gallery from 5pm on Thursday 13 March 2013.

Three Studies from the Human Body