“My
ambition as an artist is to be the ‘Turner of matter’. As Turner severed colour
from depiction, so I attempt to sever matter from depiction.” As such, Carl
Andre (born Quincy, Massachusetts, 1935) became a leading artist in the
emergence of Minimalism in the United States in the mid-1960s, making
sculptures out of ordinary industrial materials – wood, bricks, and metals –
arranged on the floor in simple linear or grid-like patterns. Following a visit
to Stonehenge at the age of 19, Andre has worked with the idea of “sculpture as
place” rather than the more traditional concept of “sculpture as form”.
Although his life has been overshadowed by controversy, not least for the
murder charge for the death of his wife, Ana Mendieta, in 1985, fellow artist
Richard Serra’s claim that “he changed the history of sculpture” is not an
exaggeration, and the eight works in this exhibition, accompanied by examples
of his poetry, seek to justify this claim.

I have to
confess to visiting Turner Contemporary today, as a supporter of Mendieta,
intent upon disliking Andre’s work. Having stood and admired the rawness of
matter in David Chipperfield’s imposing North Gallery, however, magnificently
curated and exhibited, so as to have all eight works together in a relatively
small space, playing off one another, highlighting for the viewer just how
accurate Andre was in his judgment that “copper is more profoundly different
from aluminium than green is from red,” and with the central placing of Phalanx (1981), 14 western red cedar
timbers, in two diverging rows of seven verticals, like an arrowhead, pointing
at you as you enter the room, I was, despite my reluctance, won over, at least
to his credibility as an artist.

Entering
the gallery, which feels almost as if you are stepping on to a giant chessboard,
you are indeed invited to tread upon 4×25
Altstadt Rectangle (1967), one of Andre’s “2D” sculptures, flat upon the
ground, but there is a large print request to refrain from touching any of the
other works, since the materials are easily marked by the oils in human skin.
Who would think this of wood? Or metal? Such everyday, overlooked materials?
But here, we are invited to reappraise them, to see them afresh, as matter in
their own right, each element the equivalent to Andre of each different colour
in an artist’s palette to a painter. 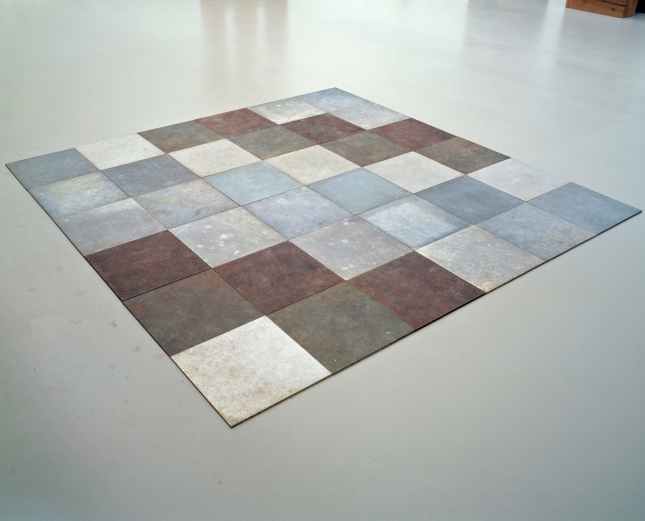 “Ideas no…
My work has no more idea than a tree, or a rock, or a mountain or an ocean.”
This is Andre’s own frank statement, and perhaps chimes with what a lot of
critics are wont to complain. But actually, his banishment of depiction and
illusion, and his affinity with the Minimalist ideals, do not equate on any
level with simplification or banality. In fact, one of the most complex and
cerebrally challenging of his works, not on display here, is his notorious Equivalents I-VIII, each a different
permutation of 120 bricks laid out on the floor. Not only do these works invite
the mathematical brain to analyse and explore which work uses which factors,
but also the title of the series makes reference to Alfred Stieglitz’s
photographic series, from the 1920s, of clouds in the sky – an early study in
abstraction and minimalism if ever there was one.

Another
work where the title tells us more than we might otherwise glean from simply looking,
is Well (1964, remade 1970), a 28
unit stack of wood, hollow on the inside. Since it towers above the average
human in height, this fact of its hollow nature would not be know if it were
not told through linguistic reference to a known entity. Such playing with
language is also a feature of Andre’s poems, of which a number are on display
here, from his grand oeuvre numbering nearly 2000. It is a little known fact
that Andre initially went to New York wishing to become a poet, but, when his
sculptures began to earn him his income, his writing took second place.
Nonetheless, his poems might be seen to echo his material works in various
ways: they are either stacked, listed, or laid out in fields, with a flatness
and modularity to them, divorcing the words and phrases from their grammar and
syntax. Ranging in subject from love, through religion, to political
responsibility, and American, Western, and personal histories, the words, each
typed with one sole index finger, are vectors, which virtually fly off the
page.[1]

This
exhibition might be billed by some as a taster for the larger retrospective which
is due next year in New York State, but I am not sure that any display could
outdo this one, where the call to focus on the minute details of each elemental
material, and to see the contrasts between one and another, has been so successfully
brought to the fore. In the light of this, the stacks of wood and chequer
boards of metal squares, seem every bit as beautiful as a skillfully carved
Renaissance nude. Go and see this exhibition with an open mind, and remember,
it is the art you are there to judge, not the artist.