Review of Gender Talents: A Special Address at the Tanks, Tate Modern

As part of Tate Modern’s Charming for the Revolution Congress
for Gender Talents and Wildness weekend, Saturday 2 February 2013 saw the Tanks
host a full day symposium with presentations by a variety of artists, activists
and academics, all seeking to investigate the contemporary status of gender
politics, “ask[ing] what is at stake when questioning, collapsing, inverting
and abandoning the gender binary.” 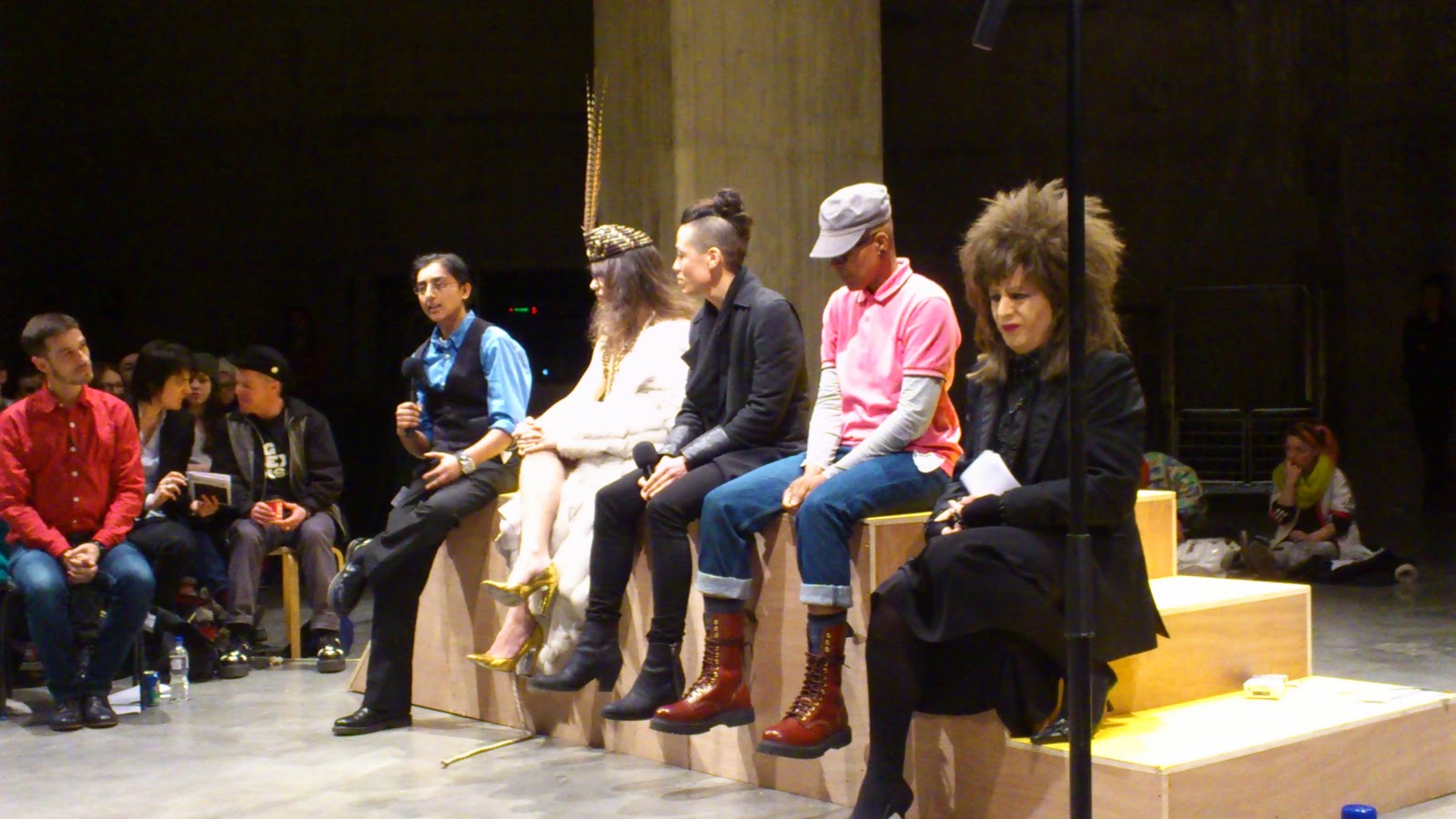 Brought together by Carlos Motta, the speakers each
presented a short manifesto on the subject of queerness, be it in terms of sexuality,
race, physical ability, or any other standard which society attempts to
regulate, but focusing on gender. As Motta suggested, a manifesto is itself “a
speech act of performance” which attempts to balance political subjectivity
with political strategy. The location of the symposium was also significant:
Tate Modern was chosen for its weight as a cultural institution, “a
legitimising agent of culture” – a “central” place from which to speak to the
“margins”.

Alongside a short film manifesto by Dean Spade, the capacity
audience was also addressed by the medical doctor and Professor of Sexology, Esben
Esther Pirelli Benestad; the pioneer of queer photography, Del LaGrace Volcano;
academics J. Jack Halberstam and Beatriz Preciado; the speaker and educator,
Terre Thaemlitz; the transvestite philosopher and recipient of the Foundation
for Arts Initiatives grant in 2013, Giuseppe Campuzano; the feminist curator
and art critic, Xabier Arakistain; and the film-makers, Campbell X and Wu
Tsang.

Whilst some speakers took Motta’s words quite literally, and
performed their manifestos, moving around the central Tank space, from one
brightly coloured podium to the next, others read their words more sedately,
and Thaemlitz, who expounded the idea that queerness need not necessarily imply
talent, and that the contemporary celebratory approach to trans issues is
somewhat flippant when one considers the struggles that still go on, sat,
face-hidden by hair, back to audience, on the corner of the stage.

Following Pirelli Benestad’s call to abandon the “curse of
dichotomy” and to celebrate a “gender euphoria”, Volcano did just that, with
his poetic performance shouting out a manifesto for queer bodies, or bodies
that queer, since, in his mind “queer” is not a noun, but rather “a verb in
drag passing as an adjective.” Queer bodies, then, are “bodies that through the
simple act of existence personify resistance.” A queer body “shows us how to
love all that which we are taught to hate,” since “bodies that queer, are
bodies we fear.” And through standing up and speaking out, demonstrating, and
showing one’s body, (in Volcano’s case, his “hairy hermaphroditic breast and
Barbie doll feet”), the limits and definitions of gender are gradually undone.
Biology, after all, is not destiny. 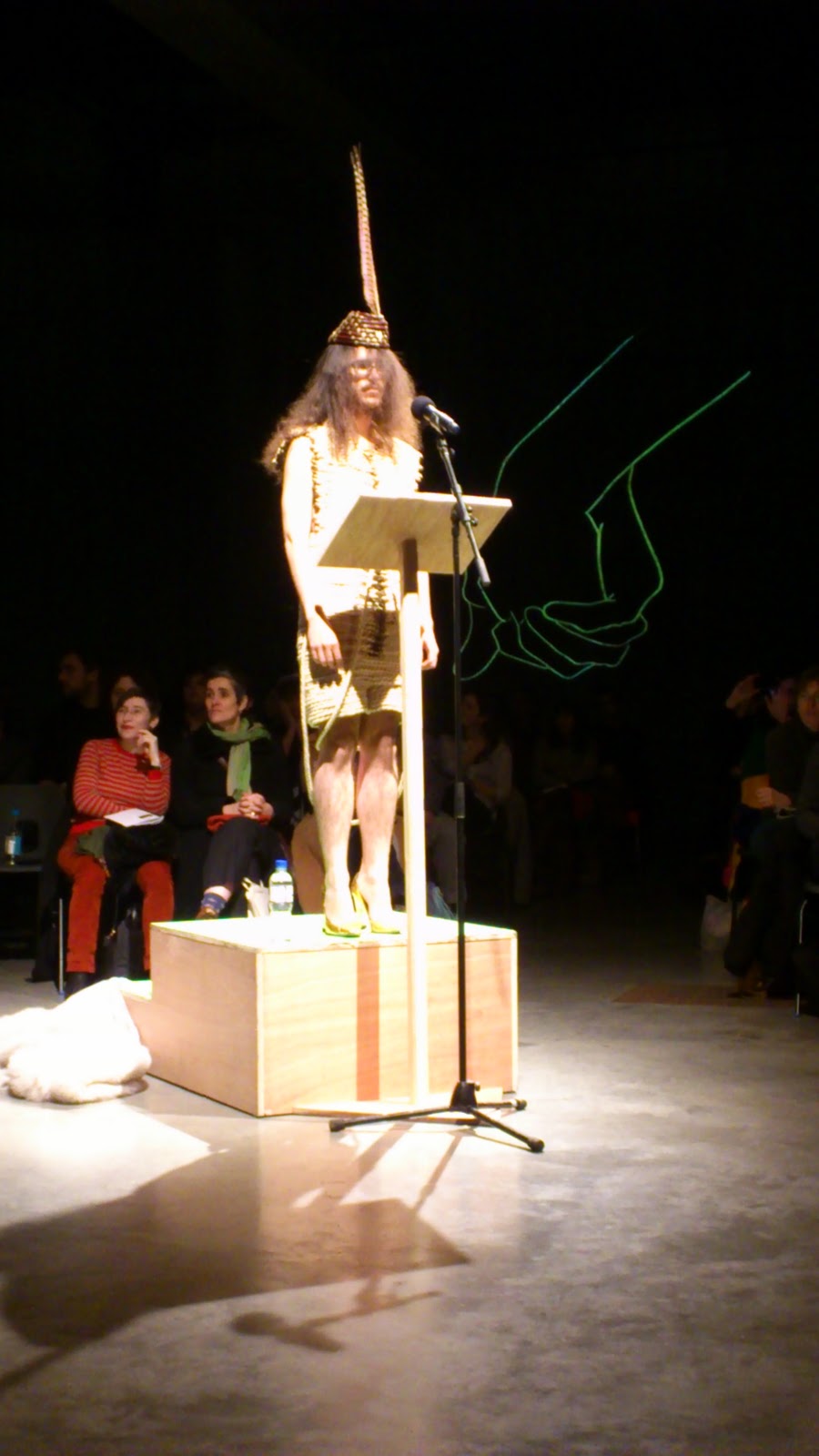 Halberstam’s presentation showed us contemporary music idols
Lady Gaga, Kanye West, and Jay Z, whilst Preciado cited Foucault, and
Arakistain took us through the history of feminism. Campbell X, standing up for
Queer People of Colour, showed youtube clips of young people speaking out, and
finished with a clip, oft removed from youtube by the censors, from her own
film, Femme, which opens with a
“honey shot”, showing a woman engaged in autoerotic activity.

And that pretty much sums up the variety of the day: from
Foucault to Hip-Hop; from hairy hermaphroditic breasts to naked girls
self-pleasuring. Gender, and all it entails, certainly covers a vast spectrum,
and cannot, and should not, be forced into a binary division. Despite
Thaemlitz’s worries, the “talents” of the congress’s title suggest, as Motta
pointed out, self-empowerment, and the semantic inversion of society’s
imposition of “syndrome” or “disorder”. Perhaps Pirelli Benestad’s words sum it
up the best: “We must rejoice in diversity, but we must not impose diversity.”
But, we must continue to speak out, and, thankfully for the queer community at
large, there are those, like Saturday’s panel, who do just this, and for whom,
as Volcano stated: “Silence has never been an option.”

This review is also available at: http://www.femininemoments.dk/blog/gender-talents-a-special-address/