Review of Christina Mitrentse: Welcome to the Multiverse at dalla Rosa Gallery

Christina Mitrentse:
Welcome to the Multiverse

Multiverse. Omniverse. Xenoverse. Hyperverse. These terms,
and the concept they denote, have been the subject of much scientific debate
for decades now, and, although no one can say how many parallel universes there
actually are, nor what size, nor how they look, what is certain is that ours is
not the only one.

Christina Mitrentse (born 1977, Greece) grew up surrounded
by myriad books on this subject. Her father studied physics, and so, from an
early age, she too was immersed in literature on cosmology and outer space.
Brian Cox, Stephen Hawking: all these authors filled her head. “But they’re all
very complex,” she says, and so, when she began to turn to art for her own
career, she decided she would take these subjects but “make them more
approachable and easier to understand for the general public.” 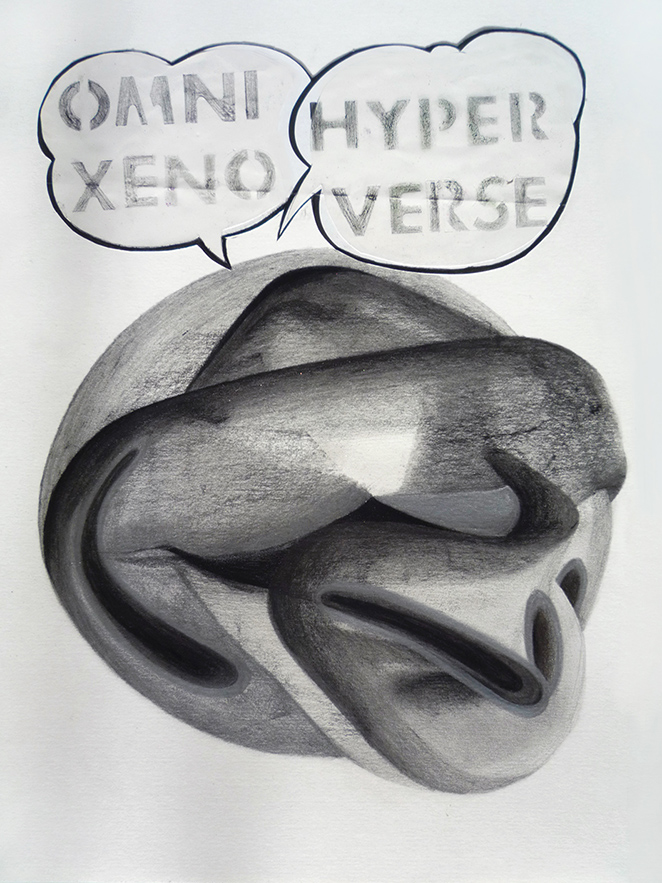 But it’s not all just science. Inspired by the works of John
Latham (1921-2006), and, of course, having grown up in Greece, where she was
exposed to orthodox Christianity, albeit not practising herself, Mitrentse’s
work also seeks to explore how art, science and religion might be brought
together, and how they overlap.

Mitrentse works primarily with drawing: 99% of her works
utilise this medium, and even some of her sculptures are built out of graphite.
“Drawing is so often a secondary medium in the history of art,” she explains,
“rarely the final product.” But in Mitrentse’s case it is. She seeks to
celebrate it as “an art form in itself,” as “an autonomous medium.” But her
methods are not conventional. Mitrentse takes her pastels, graphite sticks, and
charcoal and crushes them all to a powder. She then builds up the surface of a
work using her fingers. For her, drawing is a metaphor for cosmology, and she
seeks to create the illusion of entering space. She uses powder, she explains,
because it is more like a gas. It is not static, and it gets everywhere. Her
pieces are very technical, and not easy to make. Just as scientific theory
doesn’t allow for any errors, neither can Mitrentse make a mistake when
applying her powders – once there is a mark on the white paper, it cannot be
removed. 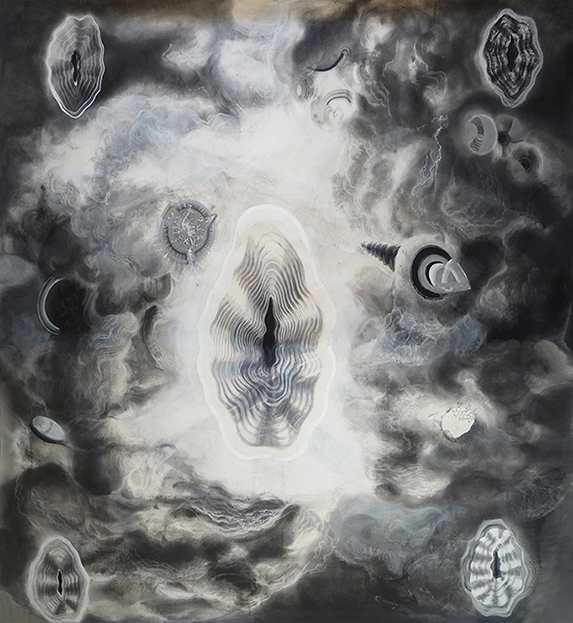 One of Mitrentse’s larger pieces, Cosmogenesis or Virgin (2010) (270 x 270cm), exemplifies her style.
Stark in its black and white tones, it mirrors the structure of a Byzantine
icon with the central image repeated in each of the four corners. The title,
referring to the birth of the cosmos, has both religious and scientific
readings, and it is overlaid with sexual connotations too. The central
shell-like figure, floating in a cloudscape so large that it draws the audience
in, might represent a black hole or a vagina. And how are we to interpret the
penetrating conic shape zooming towards the opening at speed? The work could be
something straight out of a science fiction film. There is the impression of
travelling in and out of these black holes. Following Hawking, who talks about
the “bending of space” in the universe, Mitrentse’s images work solely with
circles and curves; there are no straight lines anywhere. 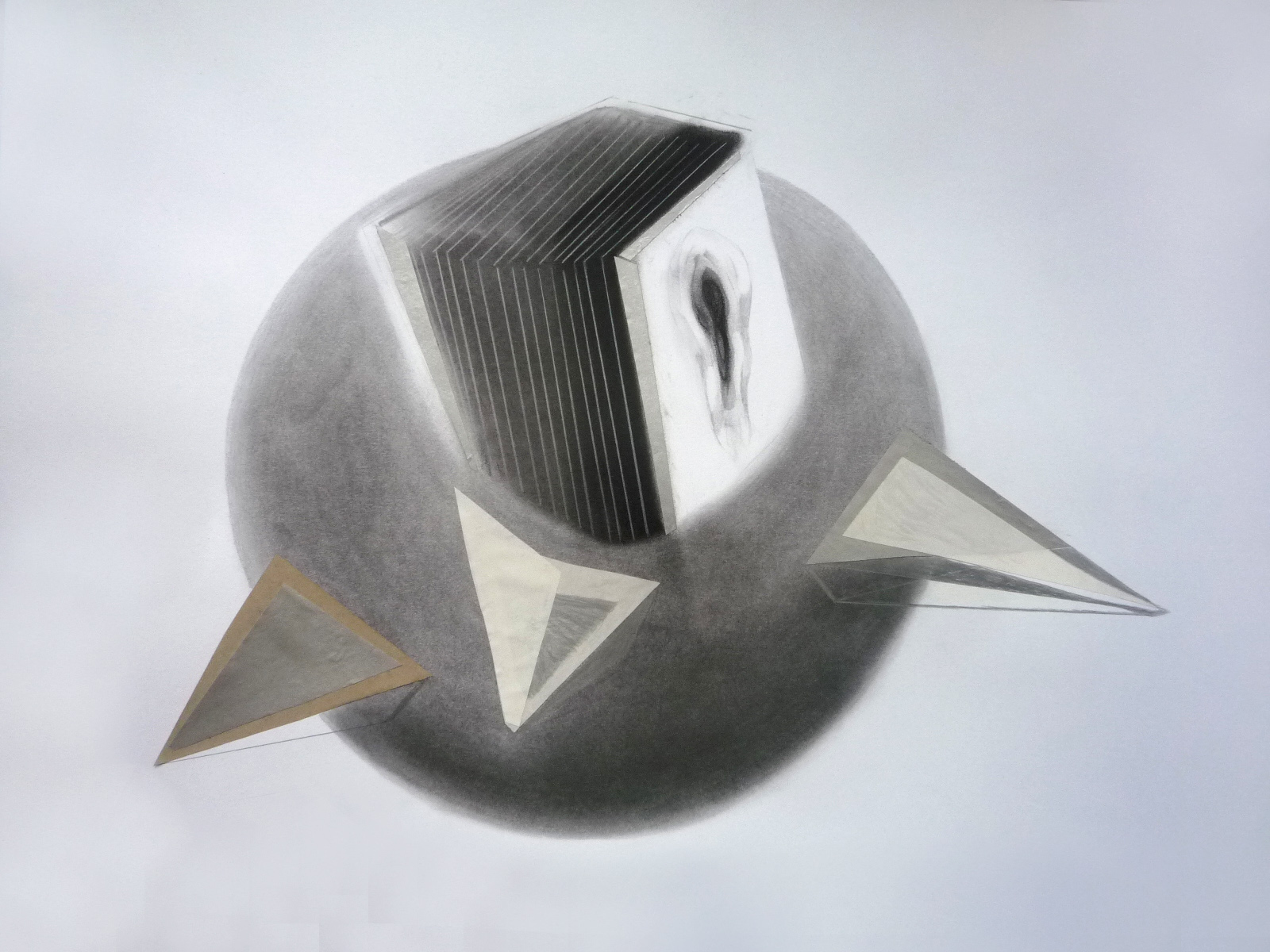 Another of Mitrentse’s works is a series of four pieces,
each 50 x 70cm, entitled Wounded Super
Selene (I-IV, 2012-13). Again influenced by Latham’s work, as well as by
Russian Constructivism and supermoon theories, these pieces, drawings with superimposed
paper collage elements, show spherical moons being penetrated by books. This
perhaps brings Mitrentse back to her roots, both as a child, being influenced
by all these ideas of cosmology, but also to her ongoing Library Project, begun
in 2005, for which she initially destroyed and recreated her own library, and
later began to ask friends and colleagues for the title of their favourite
(art) books, the cover page of which she then dismantled and reconstructed,
juxtaposing titles with random unrelated images. In a later stage of this
project, she turned to work with science books, and from this came the series Science Books (2012-13), including works
such as Black Holes Are Not Just Holes
and Chaosophy (“It’s a very
interesting book, actually!”). In an unsurprisingly exacting manner, Mitrentse
took to carefully studying different fonts, so as to recreate them perfectly
freehand, rather than using stencils, as it might, at first glance, appear. 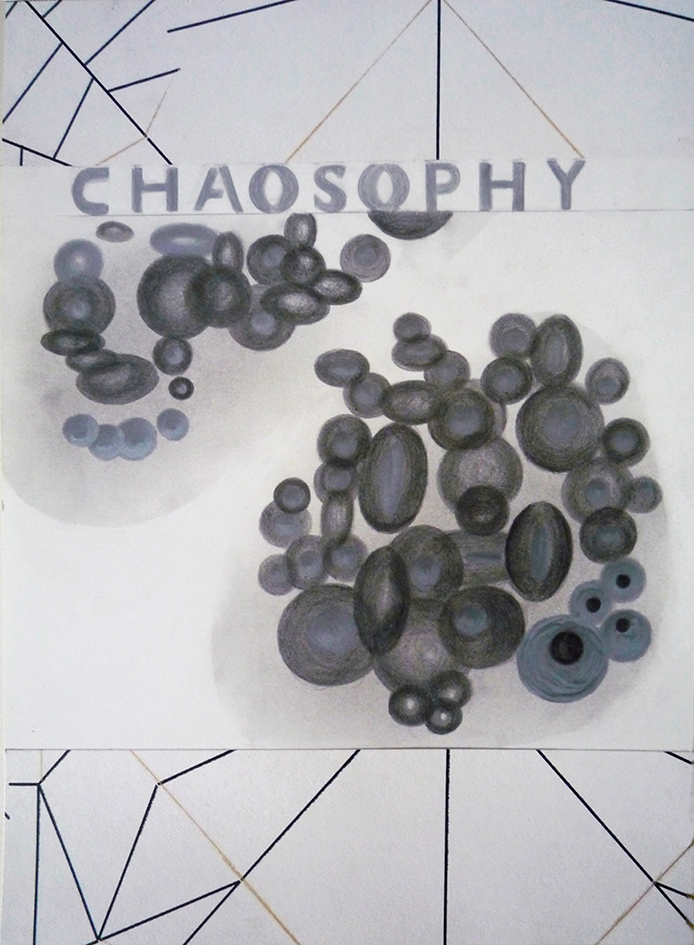 For her current exhibition, Welcome to the Multiverse, being
held at dalla Rosa Gallery in Clerkenwell, Mitrentse has produced a screen print
limited edition of 10 on mirror paper, and another 15 pieces on white paper,
which is a diptych entitled Anomalous God
Is Not Great No 1 (2013). Representing a dark and swirling cloudscape, the
mirror light effect references an eclipse, where our experience of light to
dark is blurred. 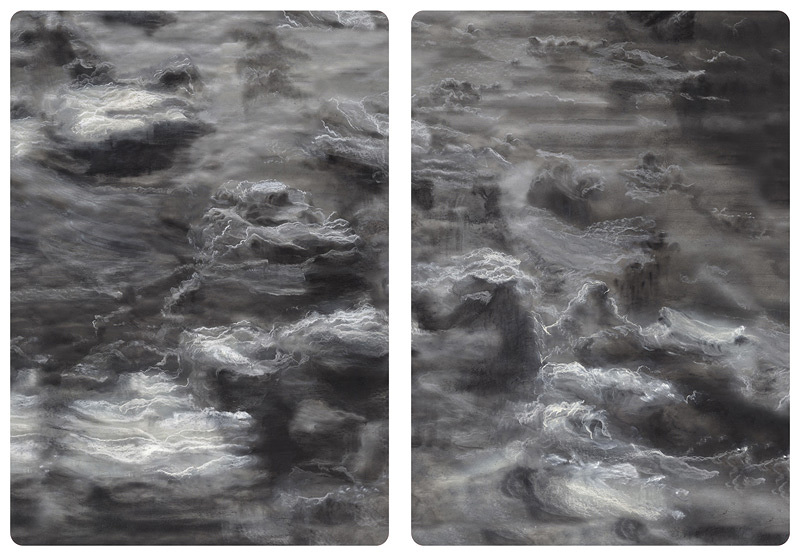 Mitrentse’s work, then, is all about looking inside. She
represents the macrocosm, but seeks to invite the viewer to penetrate to the
microcosm within. Representative of science, religion, and the artistic
borderland, her method of production is a science in its own right.

Anomalous God Is Not Great No. 1