According to the information accompanying Bruce
Nauman’s current London show, its title, ‘Mindfuck’, is a slang term, both verb and noun, which can mean ‘to brainwash or manipulate
someone,’ or describe ‘a distressing situation or incomprehensible event.’ A ‘mindfucker’,
correspondingly, is ‘anyone who makes a living by playing with the heads of his
clientele, be it a guru, a psychoanalyst, a prostitute, or an artist.’ And
Nauman (born 1941) is certainly an artist who fits this definition. The
exhibition, at Hauser & Wirth, which contains a selection of just five mid-career works, leaves
the viewer feeling traumatised, disturbed, and yes, indeed, mindfucked. 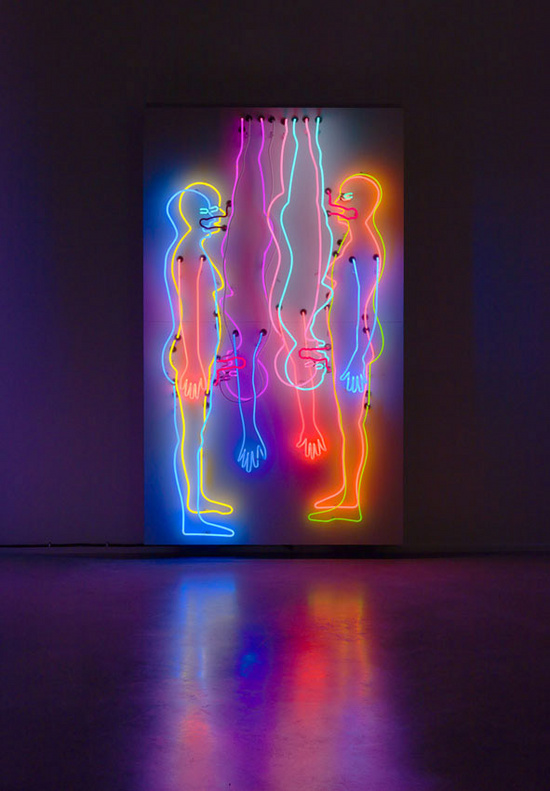 The show’s curator, Philip Larratt-Smith, claims that this
is the first time the artist’s heterogeneous output has been considered from
the point of view of Freudian theory – surprising, perhaps, given its continual
concern with the mind-body split, especially from the point of view of not recognising it, and the confusion of
the oral and anal aspects – one of Freud’s specialities – in works such as Sex and Death/Double “69” (1985), in
which neon figures are inverted and overlaid in a muddle of breasts, penises,
cunts and mouths – gender fuck and literal fuck all at once, masquerading as an
arcade machine where the visitor might expect to feed a coin into a slot in
order to join in the fun. 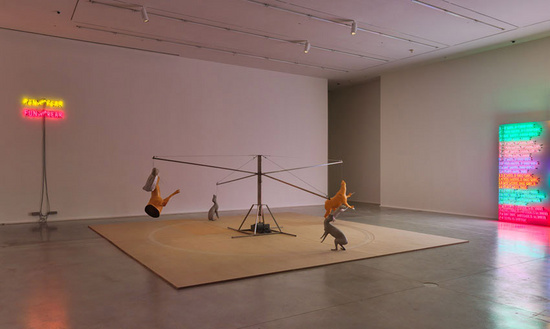 Still with the fairground theme, the larger work Carousel (1988) is a motley assortment
of dogs and horses, strung up, some mutilated, and some with a grey chalk
attached to their trailing limbs, screeching as it draws a circle on the ground
beneath as the contraption rotates. The fragmented animal parts, which
Larratt-Smith suggests look like ‘undigested fragments disgorged directly from
the id,’ are caught up in a Sisyphean loop of suffering, replicating the
banality and cruelty of life. Whether the imagery has to be quite so tasteless,
however, I remain unconvinced. 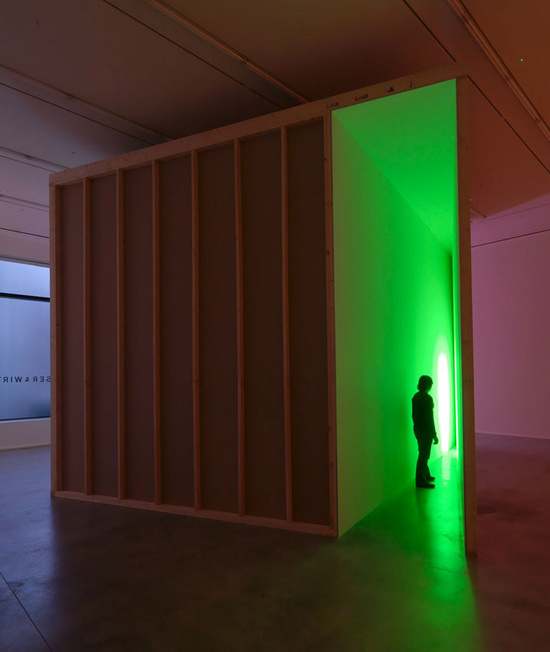 The highlight of the show is Untitled (Helman Gallery Parallellogram) (1971), an installation in
which the visitor must squeeze down a narrow, dark passageway to emerge into a
room filled with bright green light: a parallelogram, or is it a parallel
universe? Peaceful and troubling; a haven of disorientation, recalling, as
Robert Storr suggests, Nauman’s own empty studio where, left to his own
devices, he explored the limits of his consciousness.[1] 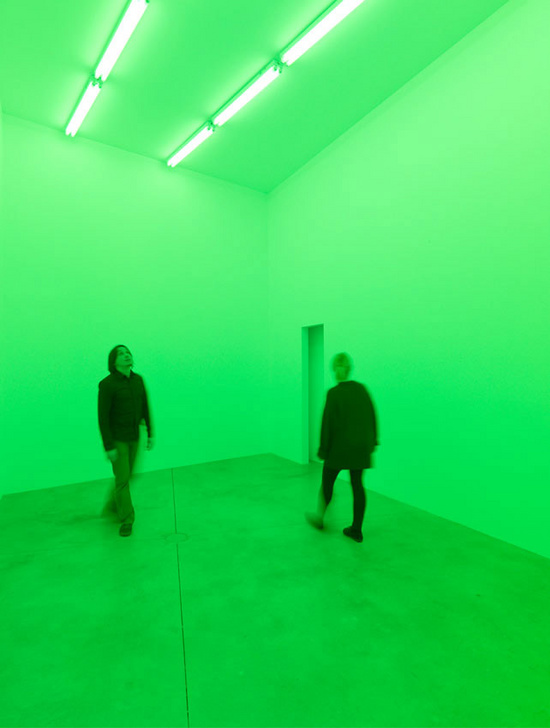 With the neon lights flicking on and off, and the continual
clonking and scratching sounds from Carousel,
the entire experience of being inside the gallery is more than mildly
disturbing: it is like being trapped inside a nightmare. Larratt-Smith proposes
that the experience of certain works by Nauman approximates a state of trauma,
that his art is equivalent to the conversion symptoms of the hysteric, the
utterances of the psychotic, and the repetition compulsion tied to the death
drive. Excuse me if I remain somewhat sceptical as to how many of these states either
man has ever experienced! One thing, however, is certain: these works have an
effect at some deep level of the unconscious. Indeed, they leave me confused
enough to wonder just who it is that is (being) mindfucked here: Nauman or his
viewers? And who is it who is doing this mindfucking: Nauman or those who
analyse him and his works? The visitors? The critics? Me? Am I, ultimately,
fucker or fucked? Maybe, as in Sex and
Death/Double “69”, I am both simultaneously.