Review of Victoria Kovalenko: Pulse of a Sequence at Frameless Gallery

Victoria Kovalenko:
Pulse of a Sequence

Time never stands still, and one of the joys of photography
is its ability to capture and preserve fleeting moments of transience. Yet Siberian
born photographer, Victoria Kovalenko, seeks to move beyond this fragmentation,
and to portray the flow of momentum, or, as she terms it in the title of her
current exhibition at Frameless Gallery in Clerkenwell, the Pulse of a Sequence.
Influenced by Eadweard Muybridge, her beautifully shot and painstakingly
collated images document transition, overlaying instants, just as we experience
them in real time, and telling a narrative. After all, “that’s how our brain
works,” she explains. “It always wants to see the pattern, the story, it can’t
help it.”[1]

Her works are large scale, since they seek to celebrate
beauty. Water is a recurring theme, for example in Wave and Between Borders,
where it is seen from above, swirling in perpetual motion, like the waves of
time, continually in flux, and in her various pieces depicting surfers as they
ride and crash through the breakers. Kovalenko works initially with a digital
camera and then puts in a lot of postproduction hours, working,
re-working, and examining every inch in minute detail so that the joins between
the images are seamless. Looking at the resulting works, it is not a surprise
to hear Kovalenko describe herself as a perfectionist.

Dance is another common motif, with Trisha Brown Studies paying tribute to
the choreographer of its title, a pioneer in contemporary dance, as it captures
a dancer recreating the seven moves which made up one of her early
performances, comprising repetitions of just these moves. Downstairs, A Day Yet Without Me represents movement
through colour, with eight repeated images of a girl poised in an arabesque, each
subtly different in hue.

Calendar looks
at the passing of time at a slower rate, with 31 circular shots of a girl’s
exposed torso, top rolled up, hands in jeans pockets, each with light falling
from a slightly different angle, corresponding to the phases of the moon. Next
to it, Song Without Words also
comprises 31 discs, each of which freeze frames a moment in time from a film of
a pianist at play. The effect is like the display of the pages of a flickbook,
or a zoetrope unfolded and spread out on the wall. 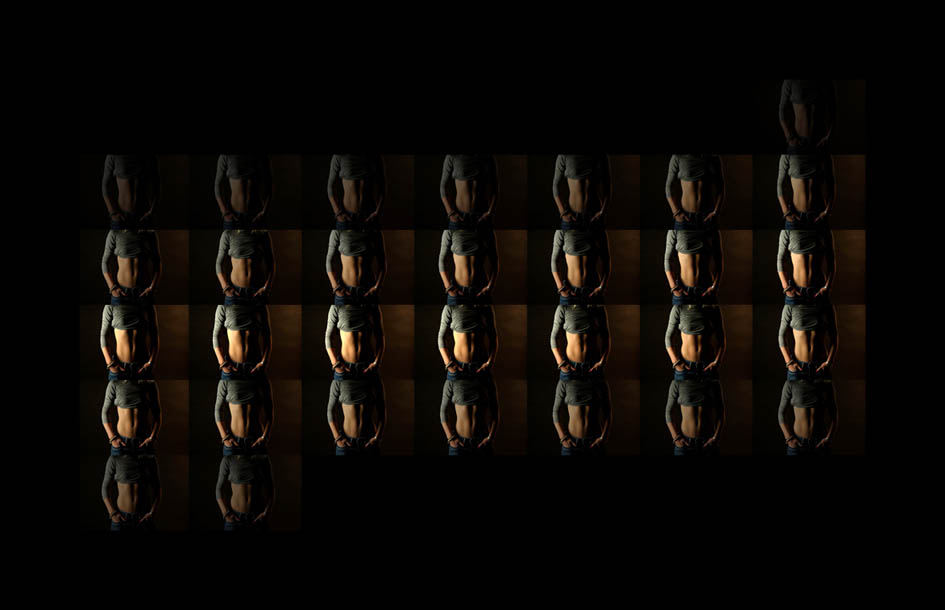 “Other mediums depict ideas, but
photography explores reality,” says Kovalenko. And yet her works are both real
and unreal at the same time: moments of reality, telling a true story, even
presented in the correct sequence, but, somehow, because we see them all at
once, simultaneously, in a way in which real time would never permit, intriguingly
impossible.