Modern society is defined by consumerism and mass
consumption of the commodity. The most visited destination is the supermarket,
where the overwhelming array of choices between myriad near identical alternatives
leads to what the American psychologist Barry Schwartz describes as the
“paradox of choice”, and the incessant drone of background music, broken up by advertising
bulletins for the latest deal, is the ubiquitous soundtrack to contemporary
living. WW Gallery’s current exhibition, Vacant Lots, both celebrates and
exposes this dystopian landscape, assaulting the viewer with the bright colours
of Susie Hamilton’s shapeless and featureless shoppers, as they traverse the
neon supermarket aisles, and with Inguna Gremzde’s repetitive and detailed
“life through a lens” studies of shoppers and their trolleys, painstakingly painted
on to plastic bottle tops and yoghurt pot lids. 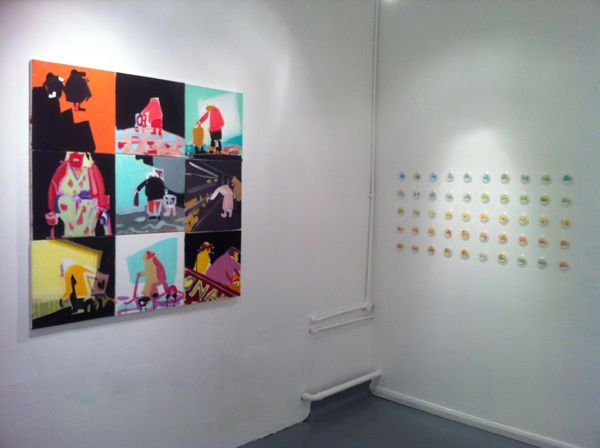 Opening with Hamilton’s Shopper,
a six minute long looped video made up of four small screens – one following
shoppers as they trawl round outdoor market stalls; the others inside, with
consumers inspecting and selecting goods, marching almost mechanically up and
down the aisles, and standing listlessly at the check out – we immediately
recognise our surroundings and, despite the anonymity of the store at hand,
know exactly where we are. The gallery is eerily silent, however, countering
our expectation of piped music, and thus keeping us cleverly at one remove, as
we proceed, nevertheless, to potter along, looking at both artists’ repeated
characters, pushing their trolleys through the banal environment. 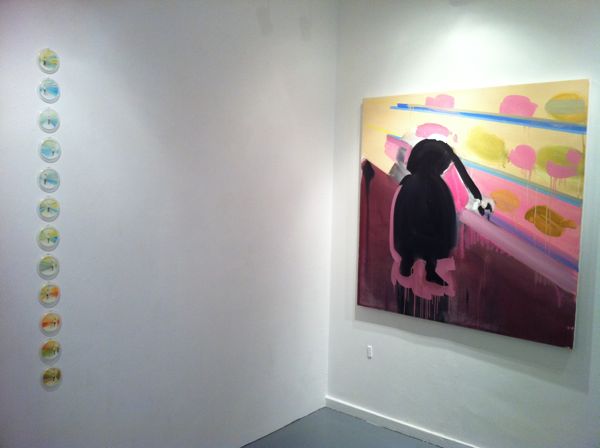 Gremzde’s shoppers are clear victims of Schwartz’s malady,
scratching their heads and chins, distractedly studying the endless rows of
products, hands thrust deep in pockets, as they struggle to make their
selections. The shelves on either side of the aisles recede to a distant
vanishing point, swallowing the shoppers up in their vortex. 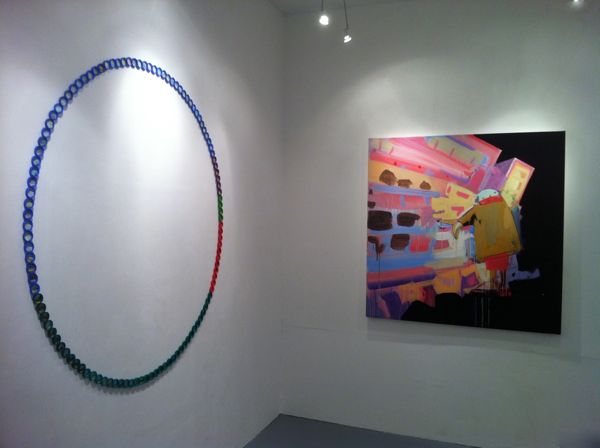 Confronting us both small- and large-scale, with characters
pared down to basic shapes and bright colours, but easily recognisable, like
logos from an advertising campaign, Hamilton’s canvases, displayed en masse in
grid formations, capture the anonymity and “everyman” nature of the modern
shopper. Their titles only serve to reinforce this dehumanising aspect, with
examples such as: Red Shopper, Asda/9,
Lidl/3, Yellow Freezer, and Mauve Aisle. In the latter, a grey-coloured
woman is bent almost double over her trolley, demonic black eyes staring out
from her otherwise featureless face, whilst in the oversized Shopper, a gloomy canvas in varying
shades of brown, a depressed, stooping, and overladen woman steps out from the
garish in-store lighting, back into the grim reality of a cold, hard outdoor world.
The weight of her bags is tangible, and the monotony of her humdrum routine
hangs equally as heavy. She may have escaped the store for now, but her return
is imminent: an inescapable part of her weekly routine. What is saddest of all
is that this short escape from the grey reality into the hyperreal aisles, full
of what is both the shopper’s dream and her nightmare, might still be the
highlight thereof. 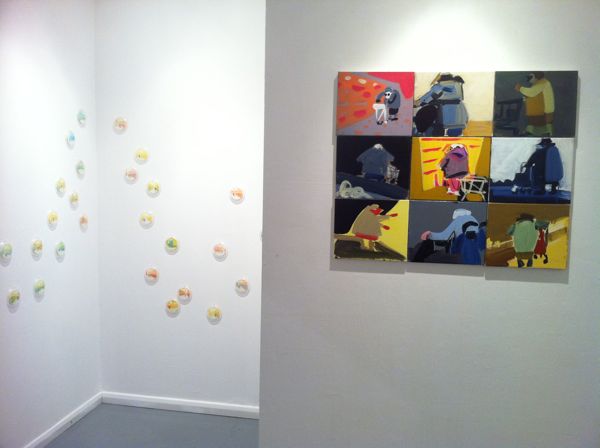