“In an art world brimming with prolix paintings
overstuffed with historical hyperawareness,
the appropriation here constructs a
refreshing picture of self-doubt within knowledge.” Such was ArtReview columnist Nigel Cooke’s comment on Paul Housley’s Self
Portrait as Picasso’s Last Self Portrait (2011).[1]
Clearly Housley must have a large dose of self-doubt then, as his current
exhibition, his second solo show in two years with Poppy Sebire, is largely
made up of further such appropriated portraits – depictions of himself as an
artist, both through the act of making a painting, and in his alter-ego guise
as Picasso, fully kitted out with beret, paintbrush,
and “the Spaniard’s regulation school-of-Paris
stripy shirt.”[2] Yet is it
not a contradiction to contrast such work with a “historical hyperawareness”?
Is this not precisely just such a case in point? 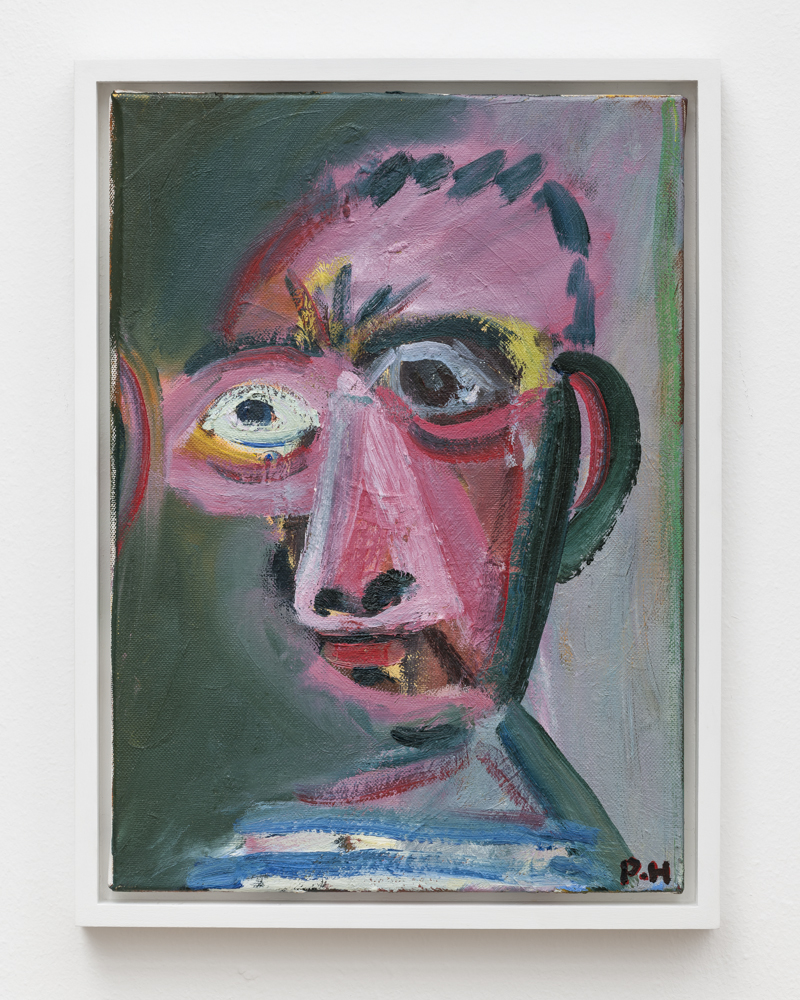 Housley’s works are virtually all cases
of appropriation – be it of subject, image, or object – since he works
primarily with found artifacts. His studio contains an ever-growing collection
of strange and intriguing paraphernalia, bric-a-brac, and discarded works.
Whereas previous exhibitions have largely comprised paintings of these objects
themselves, this one is filled with appropriated images painted on to found
canvases and frames, often spilling over the edge so as to unite the two
components in their reincarnation. The works deal with the nature of what it is
to be an artist, and, in their play on this, as well as in their homage to
Picasso, several have spawned multiple eyes, including the small and dark Artist Wearing a Blue Beret (2012), and,
most extravagantly, Totally Wired and
Cranked Up Really High (2012).
At slightly larger than A1 size, this is by far the biggest work by an
artist who prefers to produce pictures on a smaller-scale, thereby forcing his
viewer to come closer and thus confront his own self-image head on with the
image in the portrait staring back. 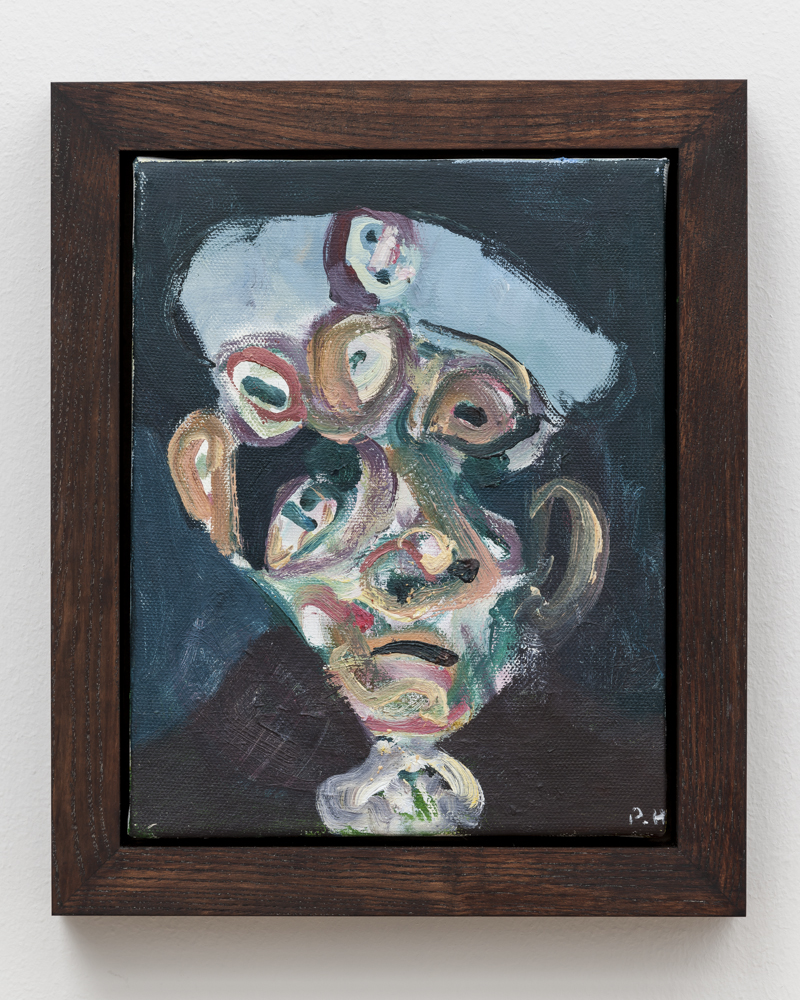 If one were to risk further artistic comparison, it is
possible also to recognise an element of George Condo, but without the
grotesque or cartoon features, and, of course, the famous pose of Matisse’s Nu bleu II (1952) is unmistakable in Green Thinker (2012). The paint is scratchy, messy, and seemingly carelessly
applied, with a lurid pink skin tone, like something a child might pick out of
a box of crayons. Nevertheless, there is an appealing quality to these
simplistic images, which certainly are not as naïve as their surface appearance
would suggest, carrying a deeper meaning and discourse, expressing both
self-doubt and self-confidence, for it is surely not just anyone who would be
audacious enough to take on the style of masters such as these. 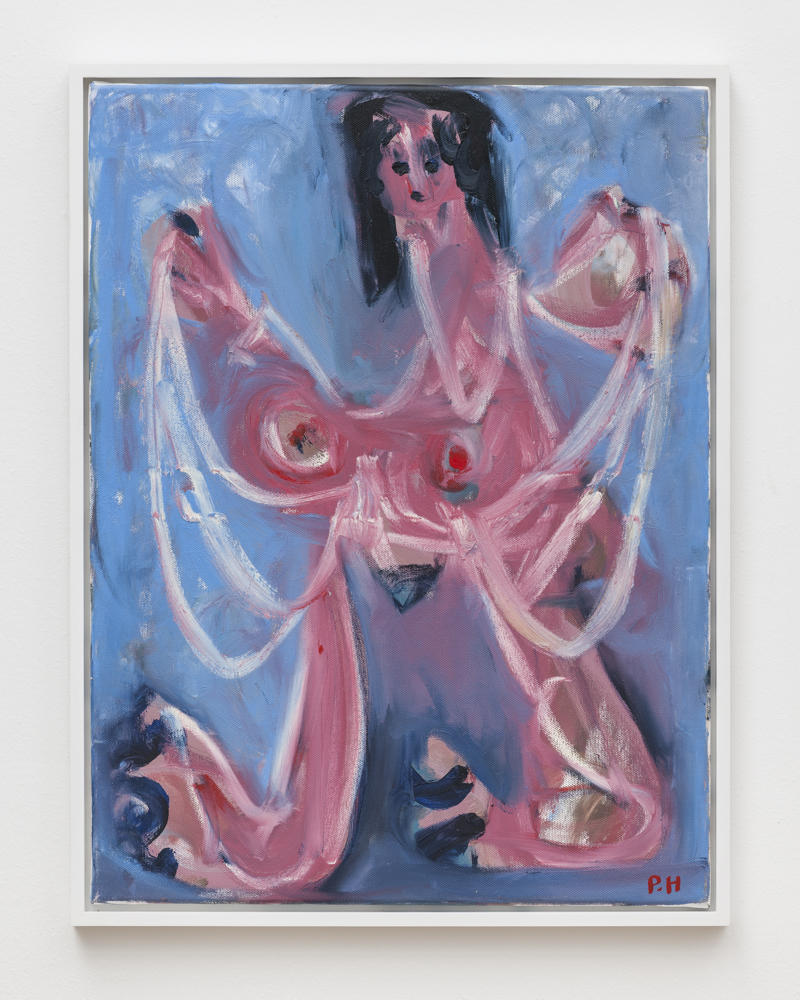 All images © the artist and courtesy of Poppy Sebire

You Ain’t No Punk You Punk