“Every passion borders on the chaotic, but the collector’s
passion borders on the chaos of memories.”[1]
Whether one subscribes to Walter Benjamin’s view of the objects of collection
as “treasure-houses of memories because each […] object evokes the precise
memory of where it was acquired and under what conditions,”[2]
or whether one agrees more with Jean Baudrillard and his assessment of the act
of collecting as the “pathological need to sequester the love object”[3]
and to inscribe it into a series, thus destroying its context of origin, and
rendering it merely part of the collection, it is clear that there is a level
of obsessionality displayed by the collector, and a sense in which the object
becomes fetishised and elevated, representative of far more than its original use
value would imply. 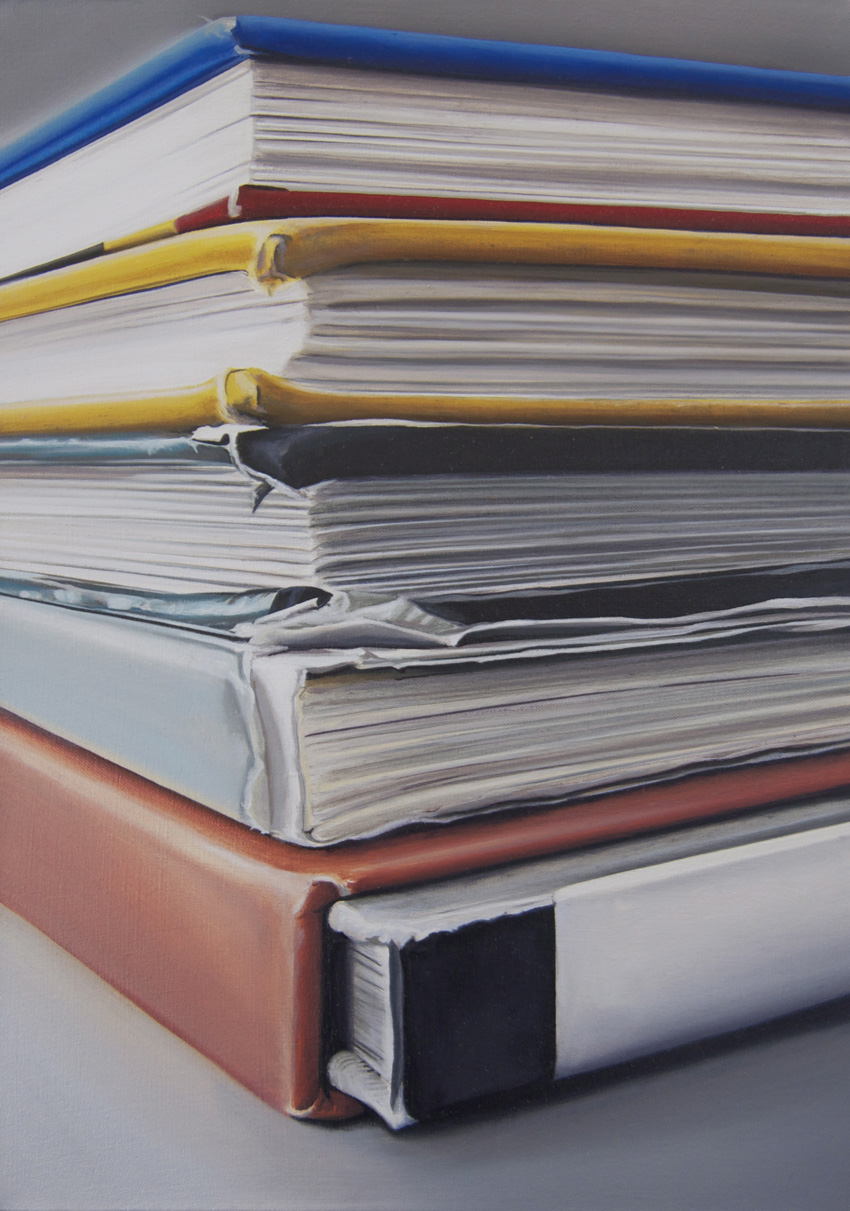 For artist Ian Robinson, his photorealistic “portraits” of
the objects of collections began when he was still at college, and he started
to paint pictures of his own record collection. Upon moving to London, he
suddenly found he had access to numerous other collections, including those of
Sir John Soane, Cassiano Dal Pozzo, and Aby Warburg, and his focus switched
from music to literature. He would visit the collections, make drawings and
take photos, and then scale these up, sometimes by hand, sometimes by
projecting the photograph on to the canvas, and paint them in minute detail
over a period of months. The results are documents of documents, catalogues of
catalogues, copies and replicas, or “models of a real without origins or
reality: a hyper real.”[4] 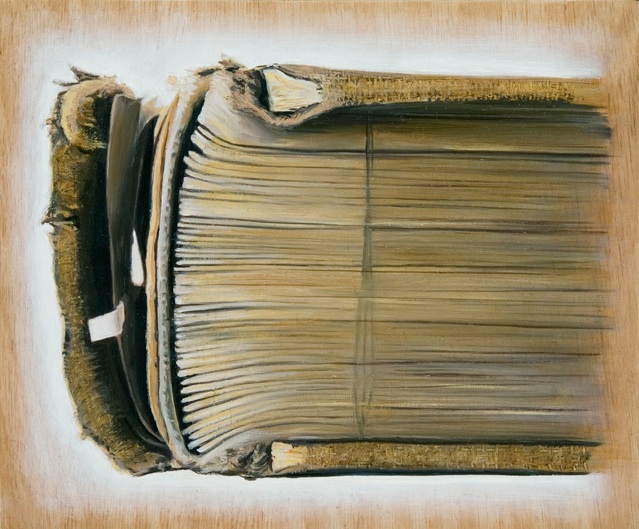 Following a year’s residency at The Muse Gallery, Robinson
is now showing a collection of his works (and, since Benjamin suggests that “of
all the ways of acquiring books, writing them oneself is regarded as the most
praiseworthy method,”[5] so,
similarly, creating a collection of paintings of collections by painting them
oneself must also deserve its share of praise), lovingly drawn and painted
images of vinyl records, CDs, books, documents, albums and manuscripts,
tattered and dog-eared, wrinkled and creased, generations of recorded media,
families, lineage and heritage. The sketchy Bookend
(2011) appears like a photograph of an old beloved grandfather, and Richard Prince Photobooks (2011) (itself
an homage to an artist who collects), has the air of a family portrait, posed
and poised, some members worn and aged, some younger and/or better preserved,
each with its own value and its own history, but all coming together as part of
a greater whole. 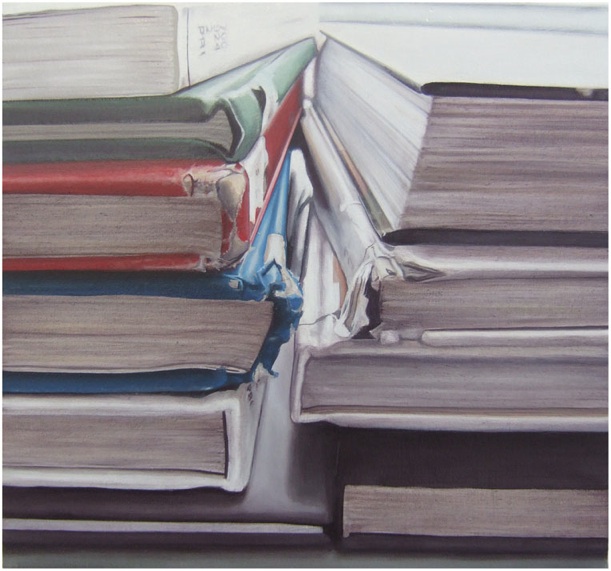 More recently, Robinson has returned to collections of
music, and has spent time at the Ministry of Sound and at Rough Trade Records. His
red chalk drawing of a mixer at the former was inspired by seeing an exhibition
of red chalk works at the Scottish National Galleries, and the air of antiquity
bequeathed by this choice of medium echoes a sense of loss with the
disappearance of a format and the death of a generation – Robinson himself regrets
that he no longer buys vinyl today. Technics
Turntable (2010), a black and white biro and pencil drawing on paper,
positions the machine floating in space, with no ground whatsoever: a pure
celebration of the object itself. 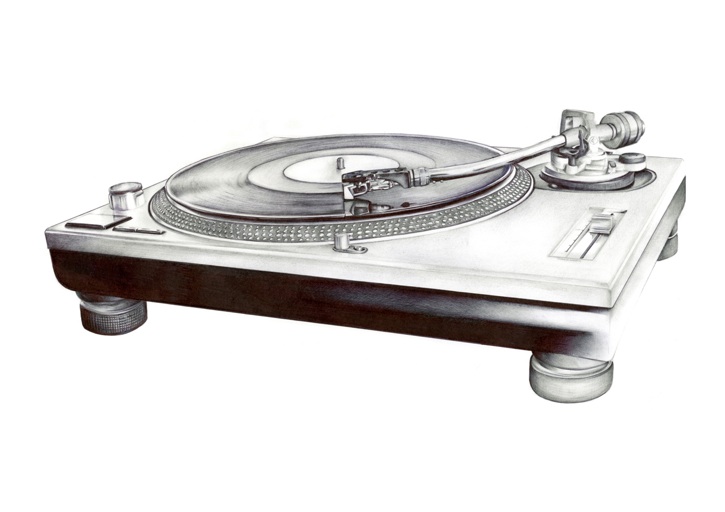 For nineteenth century French collector Edmond de Goncourt
(1822-1986), who, along with his brother Jules (1830-1870), brought about a
revival of eighteenth century Rococo style, the aristocratic lineage of an
object was an important part of its value, and for Robinson as well, the
history associated with an object or a collection is of great significance.
Part of his work involves researching both the collector and the collection,
and gaining some insight into their inner world and psyche. Their obsession
becomes his, and their complete collection a unique object in his pictorial
one. Baudrillard is keen to point out that the series in a collection must
always remain open and incomplete, for “lack is the guarantor of life: to
complete the series is to die.”[6]
Robinson is a young man, with talent and a passion for his work, and so I can
only surmise that his series will continue to grow.

Biro and pencil on paper