As Ceri Hand’s third exhibition in London, albeit in a
temporary space before moving into her permanent Fitzrovia gallery in spring
2013, she is proud to welcome Bedwyr Williams, the polymath artist-cum-stand-up-comedian
who will represent Wales at the Venice Biennale 2013. Anyone brave enough to
venture to Covent Garden’s Monmouth Street, despite the advertising information
in the form of a letter from Williams threatening to “make you eat all of your
bloody dental floss from the bin,” “bop you on your bonce with your shower head
until a cartoon lump forms,” and “hang you on your own back fence like a Yule
wreath,” will be greeted by an eclectic mixture of photography, sculpture, film
work and drawings, and, if lucky, a performance from the man himself. 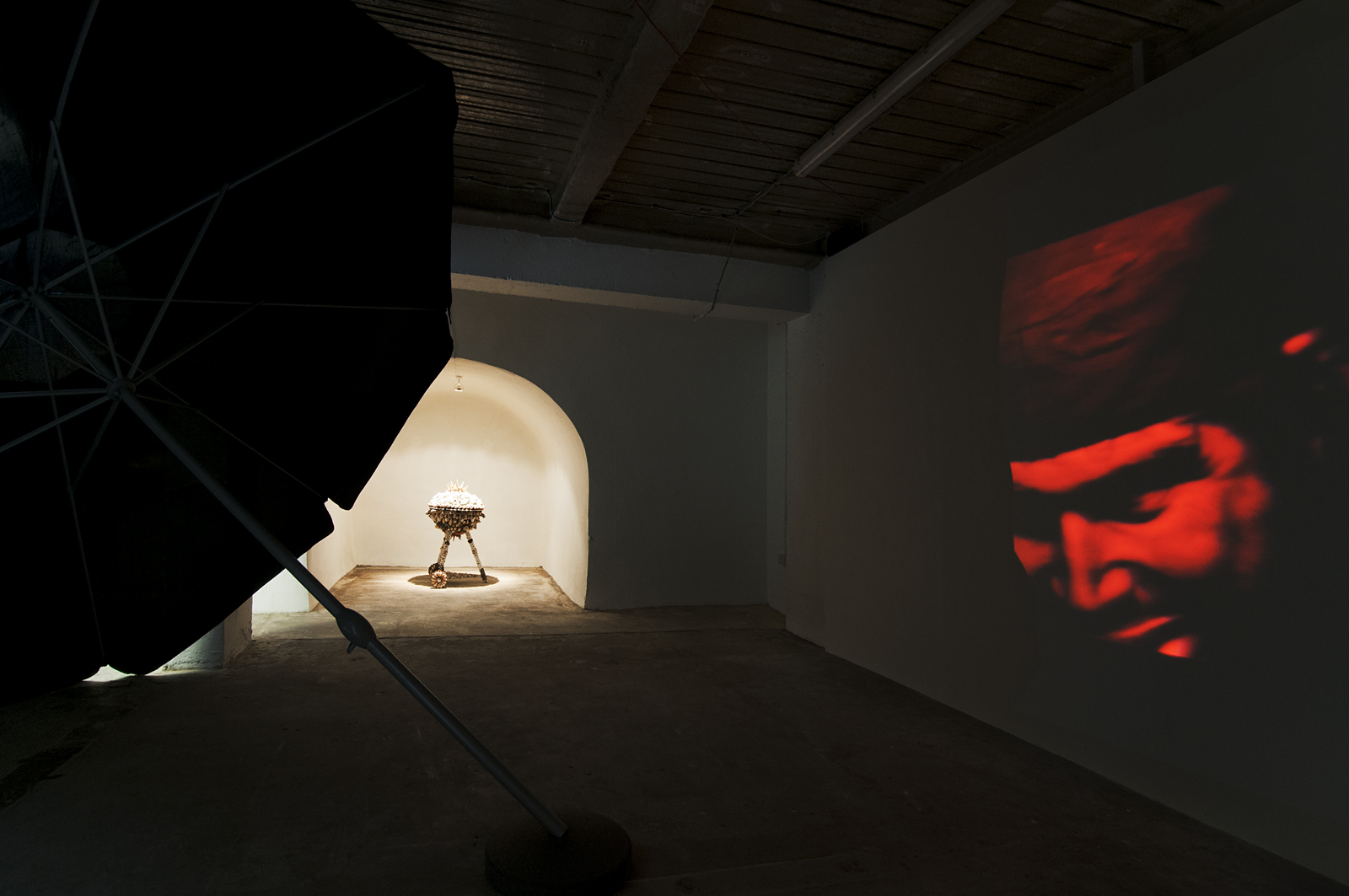 Words are a key part of Williams’ work, and titles vary from
straightforward and obvious descriptions, to comical, clever puns and, on occasion,
scarcely veiled threats. Don’t Ever Open
My Mail Again (2012), for example, consists of three circular singed
doormats, and Clocsiwr (2012) (Welsh
for “clogs”) displays a pair of wooden-soled white trainers on a plinth. For Bad News (2012), two black nylon kites
flutter in the breeze of an electric fan, foreboding and ominous, like the
sails on the ship in the tragic legend of Tristan and Iseult, whilst, on a
lighter note, Research Fellow (2012)
consists of a door with Williams’ name, hanging on the wall above the
staircase, suggesting perhaps the nature of how he sees his own oeuvre. 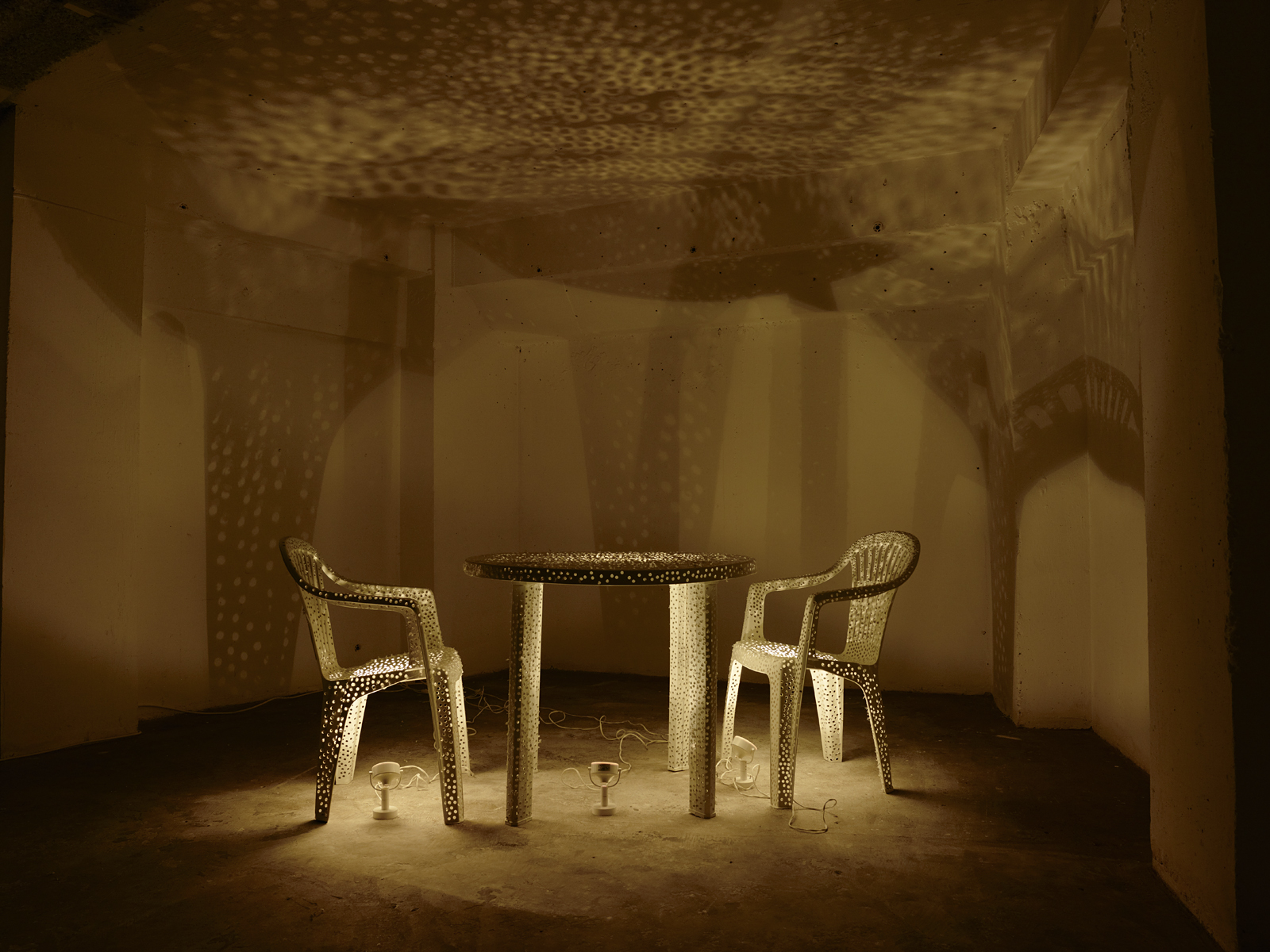 In a similar vein, The
Teacher (2012) sets up an imaginary dialogue between a large and a small
hammer, the former with its head slightly tilted to look down upon its protégé,
whilst Artist Artist (2012) performs
a real time one interaction between two speaker boxes, each uttering and
echoing the title at seemingly random points in time.

Williams’ favourite work in the show is OO/HO (2012), a miniature model lamp post, lying on its side in a
glass box. Making it made him sad, he says, as it is so pathetic! He is also
fond of The Burn (2012), however, a
shell encrusted BBQ, like a large-scale version of the trinket boxes available
in all kitsch seaside souvenir shops. This one is, quite simply, “good fun”. 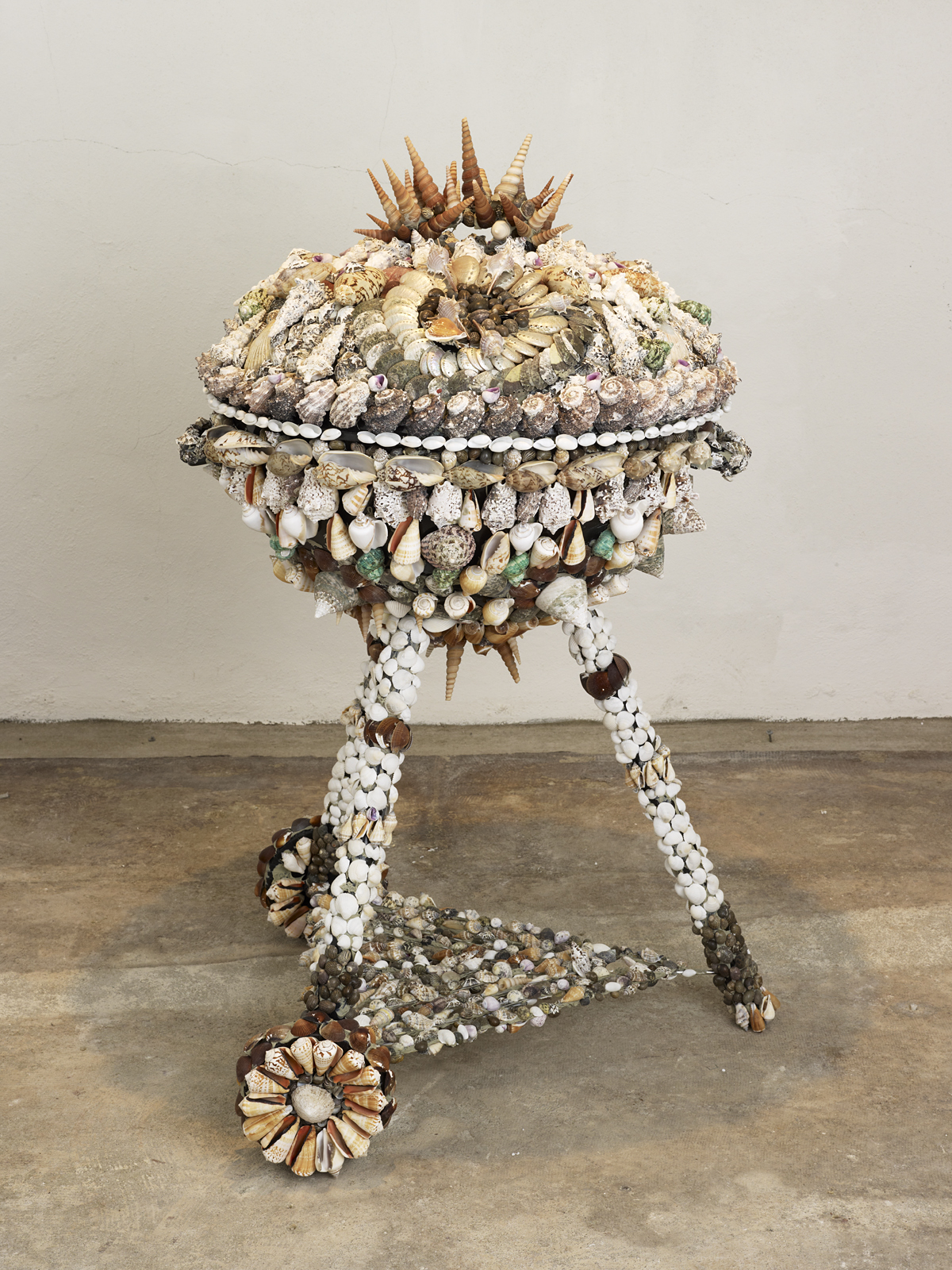 Living in a small village in North Wales, Williams is the
first to confess that most people there, including his partner, probably think
he’s a “weirdo”. He doesn’t think so, himself, however. After looking around
the exhibition, hearing a performance reading requiring me to imagine myself a
mole, and having a brief face-to-face conversation, I remain inconclusive as to
my own view. One thing is for sure: he is not your run of the mill artist! To
get a taste of what is to come on a larger scale in Venice next summer, and to
decide for yourself, take a trip down Monmouth Street, but be careful – you
were warned!