Review of Tom Pope: So It Goes at George and Jørgen

Tom Pope: So It Goes

“His is the art of whimsy,” says Professor Alexander García
Düttmann (Professor of Philosophy and Visual Culture at Goldsmiths, and
Visiting Professor of Photography at the RCA), describing the capricious and
solipsistic photographic and video works of Tom Pope. Indeed, one cannot help
but crack an almost wry, if also partly complicit smile, upon viewing Pope’s
current exhibition, So It Goes, at George and Jørgen’s Bermondsey gallery. His
comic interventions create a sense of anticipation, as we, the gallery viewers,
watch as passer bys inadvertently become caught up in his pranks. 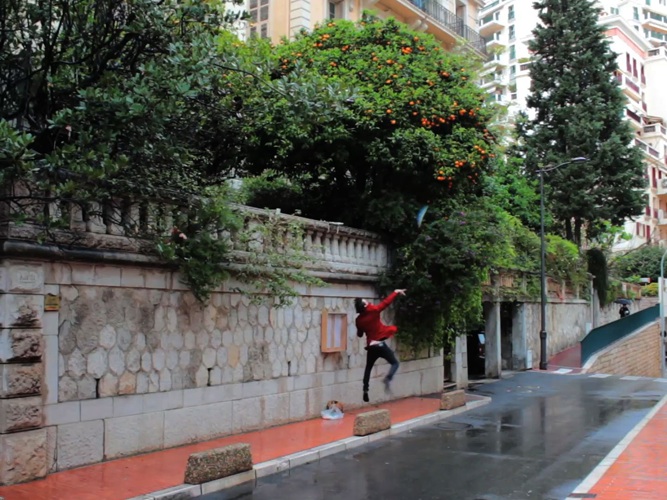 And yet there is an innocence to his misdemeanours, which
Pope himself describes as “weakly anarchic”. Breaking branches off a tree, he
explains with reference to the video work Scrumping
in Monaco, would be wrong, but shaking it until all the oranges fall off is
“ok”. This short piece is given heightened intrigue by the involvement of a
woman, passing by, who stops to talk to Pope as he gathers the fallen fruits,
in a voice too low for us to hear. We expect, perhaps, for her to scold him,
but, when she moves on her way, and nothing further happens, the viewer is left
wondering what was said. Actually, Pope discloses in a video interview carried
out for FAD,[1]
she stopped to tell him that he could take as many oranges as he wanted, since
the owners of the private garden were not at home. His boyish cheek and charm
no doubt helped endear her then, as much as they do us now. 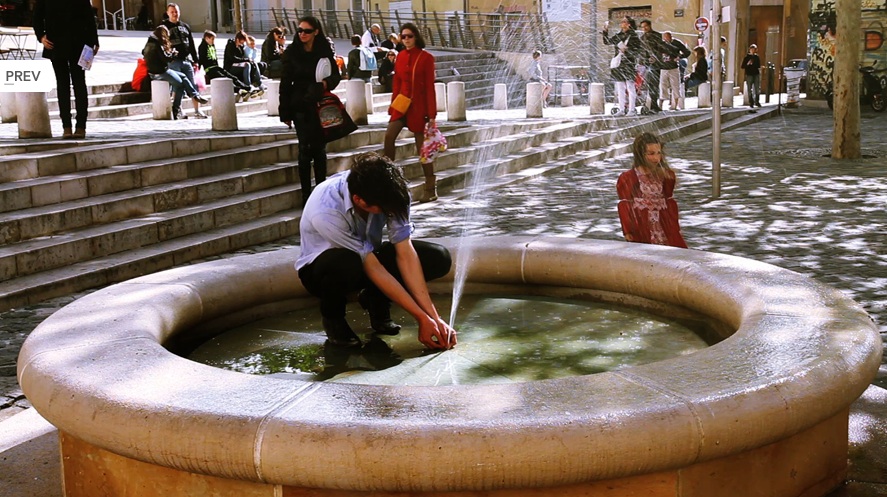 A further scene of play, in which a bystander becomes
involved, is Monsieur, in which Pope
climbs into a fountain in a square in Marseilles, and sticks his fingers into
the tap, making the water squirt out in all directions. A small girl comes bounding
over to watch, perplexed. He doesn’t react at all to his audience, and, after a
while, she runs away again, bored, only to return and watch the water, quietly
and innocently, once Pope has left. Another example of simply watching the
world go by is found in Me and You,
in which a cockerel stands almost motionless, as a hen approaches, pecks about
for a bit, and leaves. The viewer is fixed to the spot watching and waiting,
like with reality TV. Will something happen? Will it be worth the wait? Nothing
does, but strangely there is no sense of disappointment. 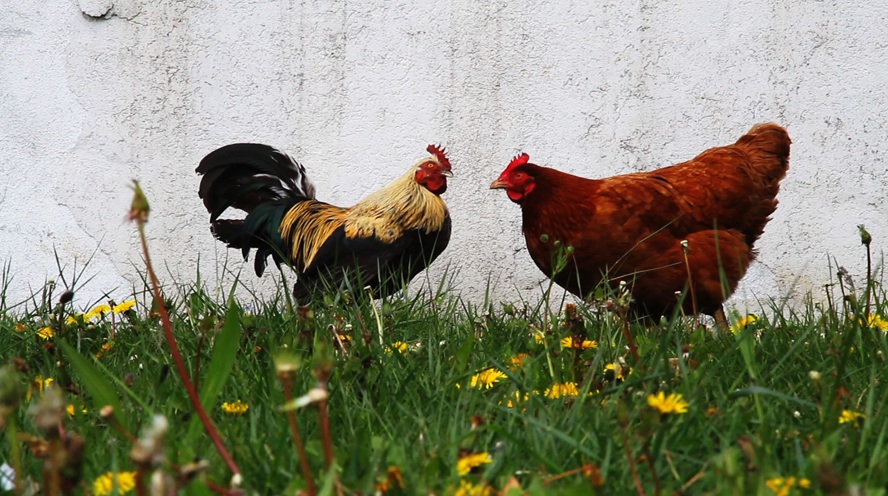 The works in this show were all made during a rather
circuitous journey which Pope and his crew (who film him all the time, thus
capturing some works in a more random and spontaneous manner, whilst others are
pre-planned and carefully choreographed) undertook, via eight countries, en
route to CERN, Geneva, in a hearse, carrying a grandfather clock. Yes, you did
read that right! Pope recently won the Deutsche Bank Artist Award for his
proposed project, Time Bound, a
performance piece in which he would destroy the clock in the Large Hadron
Collider, and question people along the way as to whether or not man can live
without measured time. Unfortunately he was not given access to the Collider,
but, with this show as its outcome, the journey was certainly not a waste of
time – measured or not. 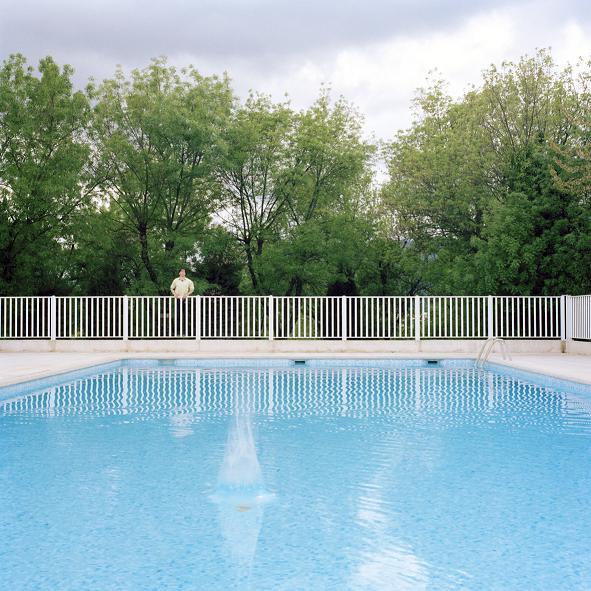 As well as the oranges, which reoccur in the photograph Another Splash, where Pope has
cavalierly thrown one over the fence into a private pool, and in Currently Unemployed Potential, a dried
exemplar brought back as a souvenir, making reference to the sun, and thus,
albeit indirectly, to time and the universe, another recurring motif in Pope’s
works is the balloon. In Caged Air,
Pope is captured squeezing one between two stone Ionic columns, whilst in Oh Fuck, he runs and jumps on a cluster
of three in a street, bursting them and setting off a car alarm in the process.
This siren, along with a soundtrack of voices, traffic, and the typing of
George and Jørgen’s director as she sits at her desk, form a cacophony of
noises which permeate the rooms and follow the visitor round throughout the
show. The overall effect is to create a sense of being out there yourself,
visiting these many places along with Pope and his crew, and witnessing the
goings on. The open question which draws you in most, however, is whether you are
left feeling more like a gallery viewer, seeing the completed works post hoc,
or one of the many passers by, caught up and involved in the works as they were
being made. If the progression of time is, after all, not an issue, would it
not be possible to be both at once? 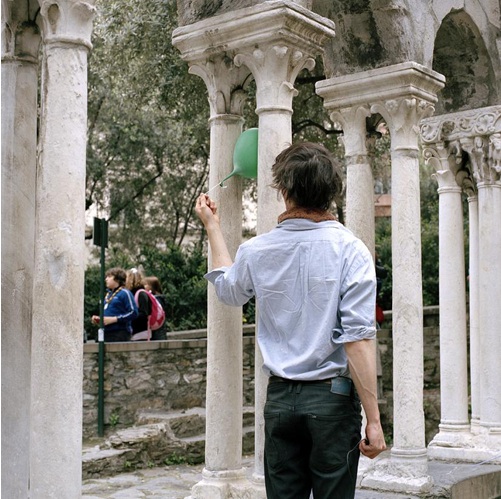