Review of Rashid Johnson: Shelter at the South London Gallery

For his first solo exhibition in London, Rashid Johnson
(born 1977, Chicago) has created something of a parallel universe in the South
London Gallery. Known for using familiar domestic materials in his work
(“hijacking the domestic,” as he terms it), Johnson has turned the main ground
floor gallery space into a topsy turvy kind of a hospital ward, or Shelter, in which psychotherapy is a
freely available drop-in service, accessible to all in group sessions. The
result is quite uncanny, with the row of four beds, placed on rugs, down the
centre, the hanging plants above, and the books stacked on a mirrored shelf to
the side, all creating a sense of familiarity and homeliness, but simultaneously
the charred frames and zebra skin bed coverings, the black tones in the Persian
carpets, and, if one looks more closely, the dark stains upon them, and, most
of all, the black paintings and cracked mirrors hanging on the walls, all stir
up a sense of unease and suggest some sinister foreboding. 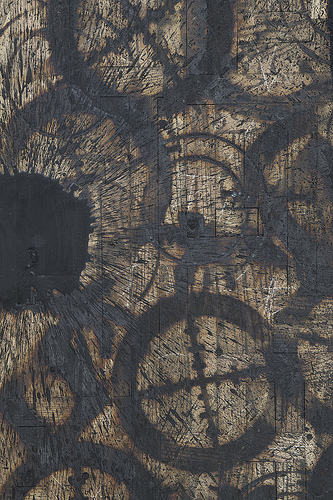 The “paintings” are in fact branded or burned red oak
flooring, covered with black soap and wax, and drawn and scratched into,
heavily gouged, with circles and crisscross lines, echoing the chaos of a disturbed
mind and the darkness within, into which the subject is digging deep, perhaps
in an attempt to purge. Similarly, the mirrored tiles and shelves in The End of Anger, upon which six copies
of a book of the same title are stacked, and an Art Blakey 3 Blind Mice Jazz
Messengers vinyl displayed, are daubed with smears and splats of black wax,
seemingly thrown at the glass with some aggression, dripping down and
splattering out, with cracks from the violent impact, and scratches on the
mirrored surface all around. Oyster shells are also perched on the shelves,
filled with shea butter – perhaps some failed therapeutic attempt to create an
oasis of calm and alleviate pent up agitation? 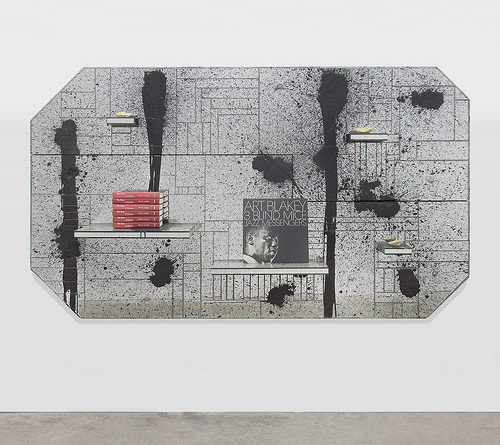 The beds are not inviting either. Only one is the right way
up, with one on its side, and two upended. And the stains seeping out from
underneath, across the carpets, appear to be written into as well, although
what the lines and signs might wish to convey is anyone’s guess – again, the
workings of an afflicted mind? 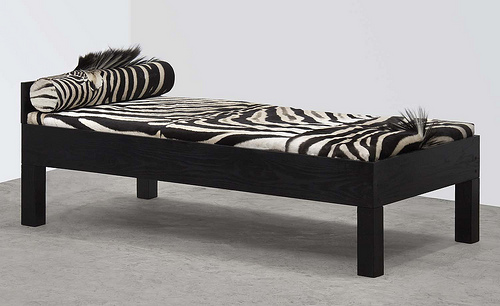 Upstairs, in the first floor galleries, Johnson has curated
a small six work exhibition showing pieces by Robert Davis, Sam Gilliam and
Angel Otero. The latter’s two contributions consist of wrinkled oil paint skins,
collaged on to canvas and painted in metallic colours, so as to suggest, to me
at least, oversized crumpled chocolate wrappers, stretched out over the
canvases. Gilliam’s piece, One Situation,
dating back to 1970, appears like a hanging cloak, or painter’s smock,
besmirched with paint smears and drips, but yet beautiful and clear in its
colours. Finally, Davis’ three works are abstract crisscross patterns across
otherwise bare and unprepared canvases, Ghost
Face using pale blue paint, but Wine
No. 1 (Cabernet) and Coffee and
Cigarettes both, like Johnson’s own work, turning to everyday materials
(here giving the names to the works) to leave their stain. How these pieces
relate to the therapy room downstairs, one can only speculate – are they the
result of art therapy sessions, or rather of the decadent lifestyles which led
to the need for therapy in the first place? Sometimes the differentiation
between the paths to breakdown and recovery are not altogether clear.

The End of Anger