Review of The Art of Chess at the Saatchi Gallery

The Art of Chess

Marcel Duchamp (1887-1968) learnt to play chess from his
older brothers at the age of 13, the same year that he painted his first
picture. Throughout his life, he sought opportunities to combine his two great
passions, with the game being a repeated motif in nearly all of his artworks,
even when in the form of buried references, recognisable only to fellow
players. Although he never achieved his dream of winning the French
championship, he was a regular competitor at tournaments across Europe, and, in
1924, he was awarded the title of Chess Master by the French Chess Federation.
By 1952, he had reached the conclusion that “while all artists are not chess
players, all chess players are artists.” 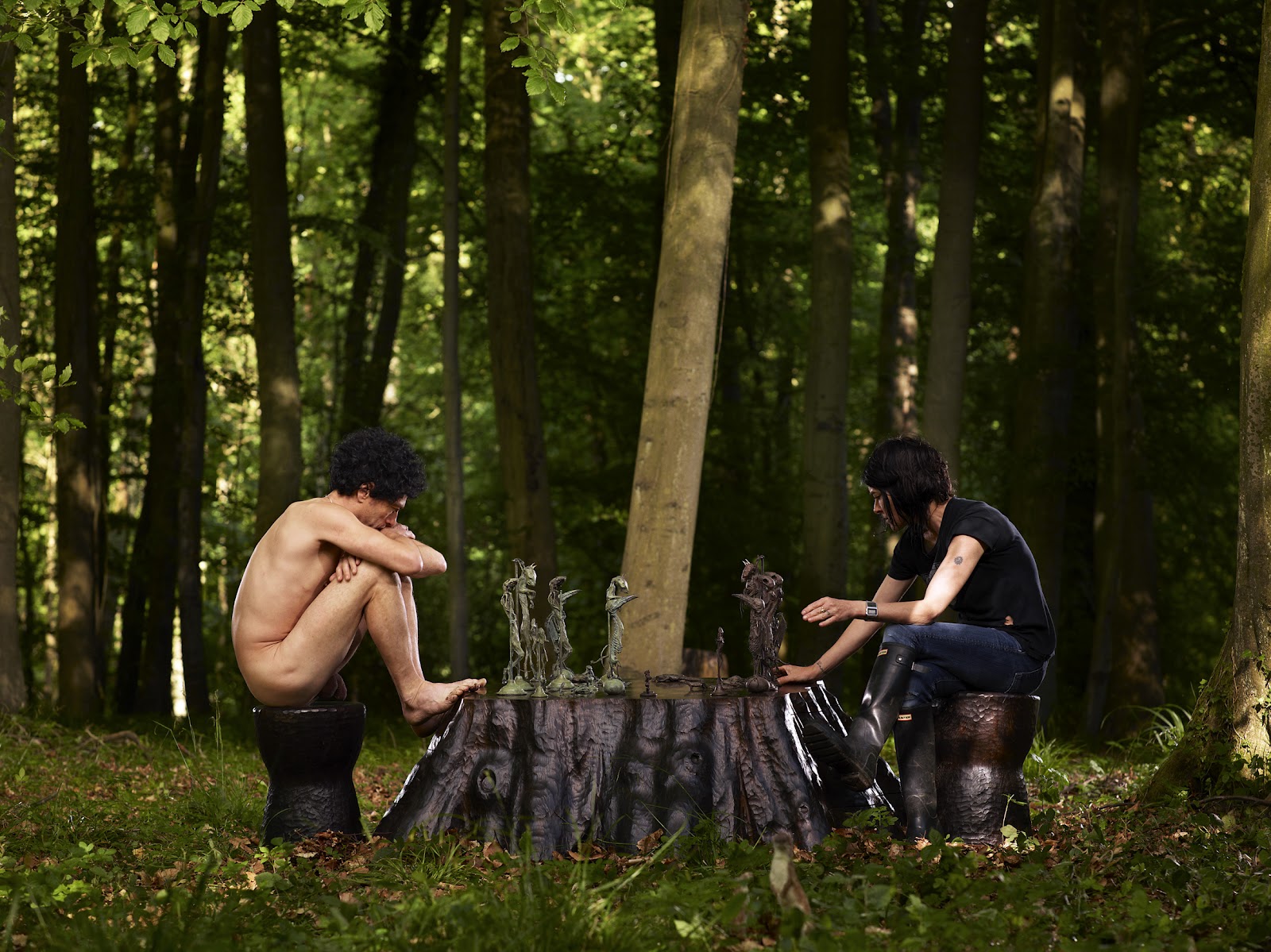 The Art of Chess, on show this month at the Saatchi Gallery,
is something of an homage to Duchamp and his love of this “game of kings”. It
also reflects the ongoing fascination with the game by so much of society
today. Of the 16 contemporary artists (or artistic duos) commissioned to
produce their own chess set for the exhibition, not all of them are themselves
players, but this is somehow irrelevant, and remains indiscernible when one
looks at the intricate boards and playing pieces they have crafted. Everyone
knows something about the game, and recognises and respects its age, tradition,
and authority.

Oliver Clegg’s Nights
Move (2008), for example, is a complete installation, displayed in a small
side room off the main gallery, in which a felt-lined desk with inlaid
chessboard is also strewn with a pair of reading glasses, a magnifying glass,
and a set of callipers. Gavin Turk’s 14 minute looped film, The Mechanical Turk (2008), also speaks
of authority, with a solitary turbaned man, frozen like a robot, mechanically
moving his hand back and forth from an arm rest, to advance his knight about
the board. 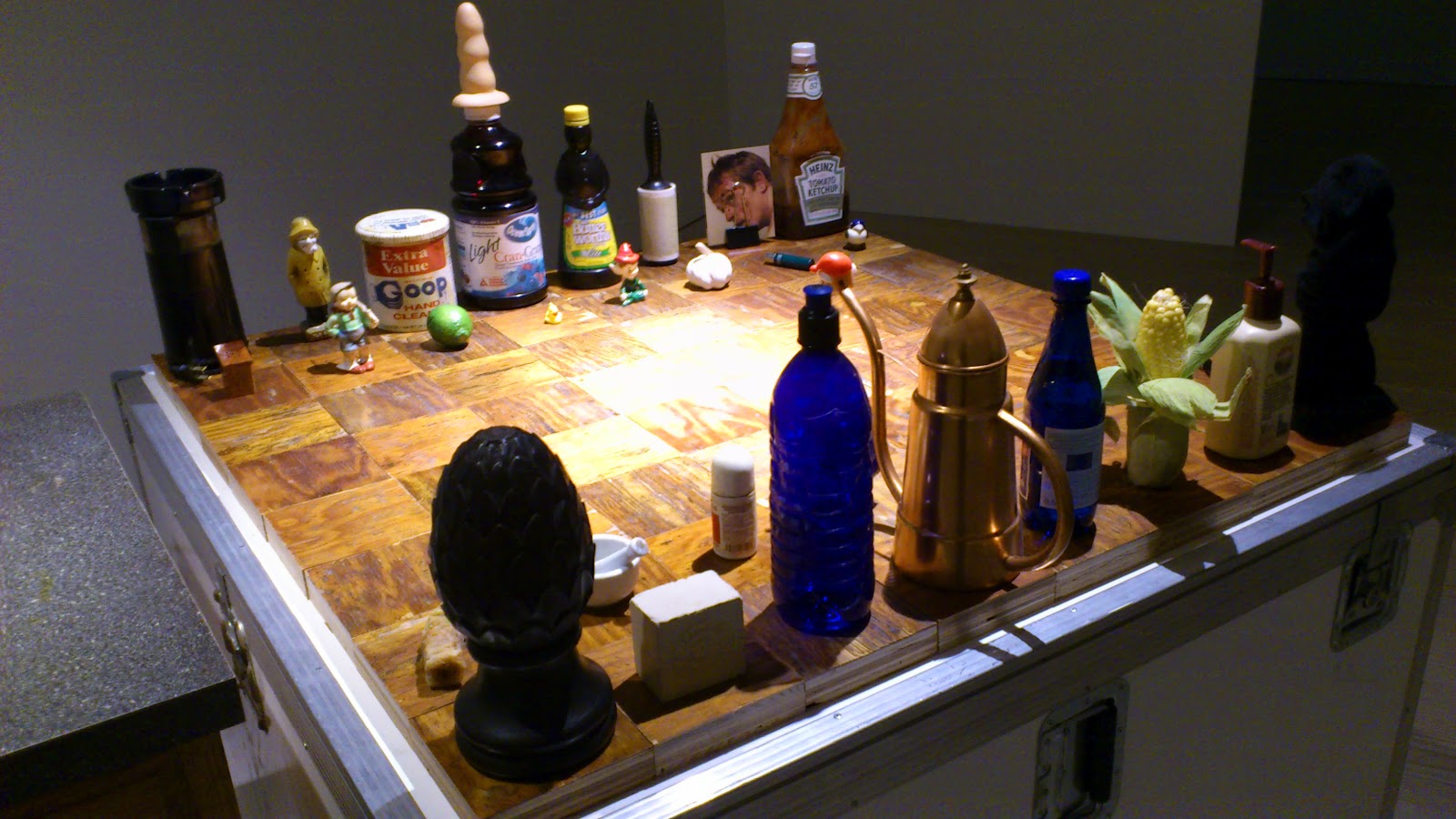 More modern approaches – playing on the Duchampian notion of
the readymade – include Paul McCarthy’s Kitchen
Set (2003), in which a board constructed out of squares of wooden flooring,
laid out so that the grain is perpendicular from one space to the next, is
adorned with found objects from his kitchen, including a bottle of liquid soap,
a jar of ketchup, a garlic bulb, a pestle and mortar, a bottle of juice, and so
on. Also following the household theme, Rachel Whiteread has put together a
brightly coloured patchwork board of carpet and tile offcuts, furnished with
miniature doll’s house sized items, such as chairs, cupboards, ironing boards,
lamps, and cupboards. 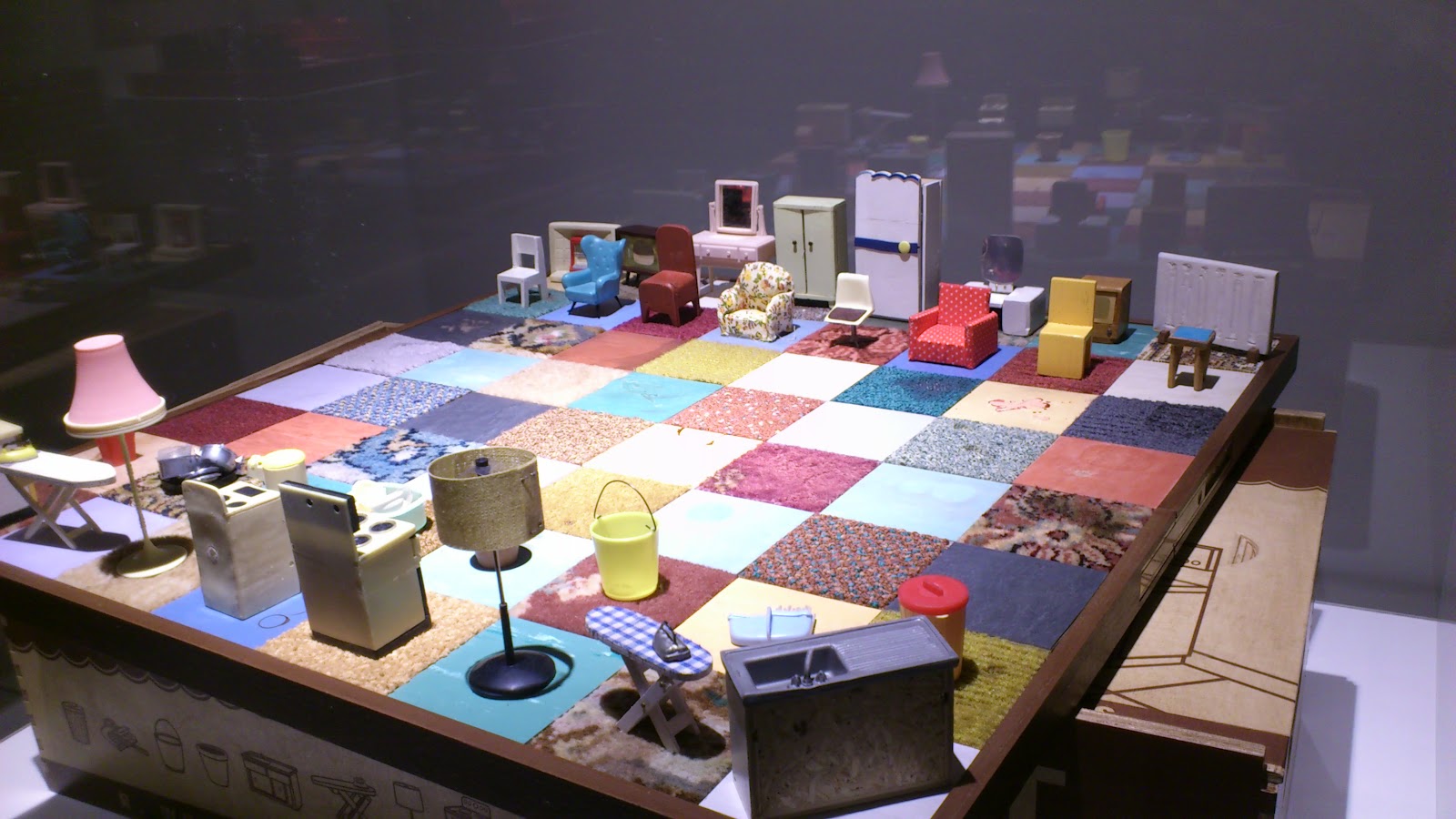 The competitive nature of the game resounds in various
contributions, including Tunga’s Eye for
an Eye (2005), where the playing pieces are plated bronze teeth, Maurizio
Cattelan’s Untitled (Good vs. Evil) (2003),
where Hitler, Stalin, Dracula and Cruella Deville are amongst those who face
off against the Dalai Lama, Gandhi, Superman, and Che Guevara, and Barbara Kruger’s
interactive set (Untitled, 2006),
which poses questions and makes comments as each move is made. A screaming
black and white face, printed on to the board, and a speaker system, video, and
text-covered box to the side, all express the frustration of a difficult game:
“I can’t go on!”; “You’re killing me!”; “There’s no way out!”; “You asked for
it!” 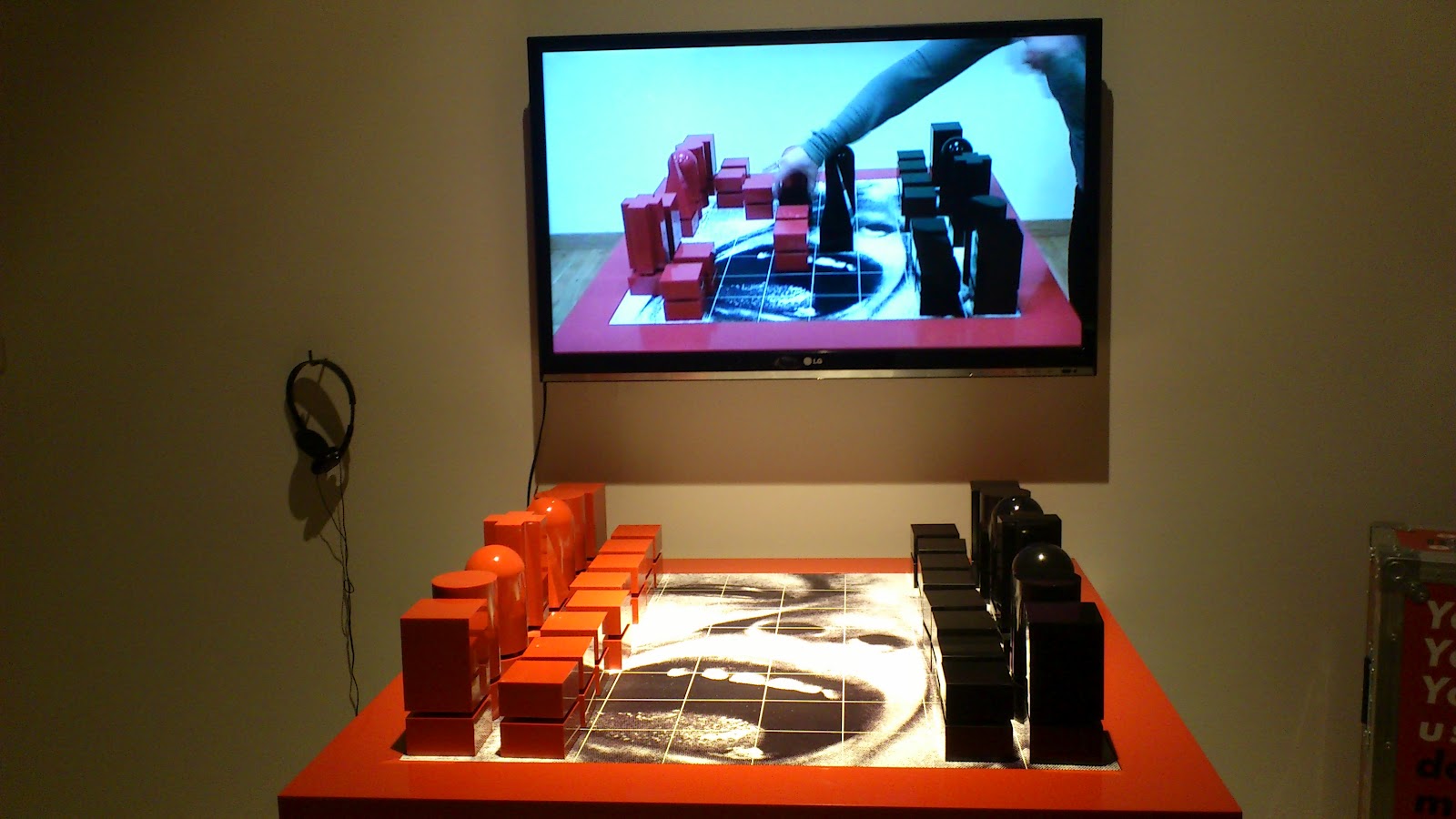 In their own inimitable un-PC style, the Chapman Brothers Chess Set (2003) play black zulu-stanced
warriors off against white opponents, all with phallic noses, upon a
skull-decorated playing board. Other artists who simply couldn’t resist making
their sets recognisably personal, include Yayoi Kusama, with her spotted
pumpkin pouffe (Pumpkin Chess, 2003),
and Damien Hirst, with his mirrored medical vitrine, containing glass and
silver medicine jars and pill pots – pawn tablets, castle capsules, bishop
syrup, K-night, queen mercury, and king cleanser – and two clinically white
stools alongside a metal surgical table on wheels (Mental Escapology, 2003). Tracey Emin’s embroidered travel set (Chess Set, 2008) could be by no one else,
and Tom Friedman’s Untitled (2005)
comprises playing pieces which make up a mini-retrospective of his best-known
works. 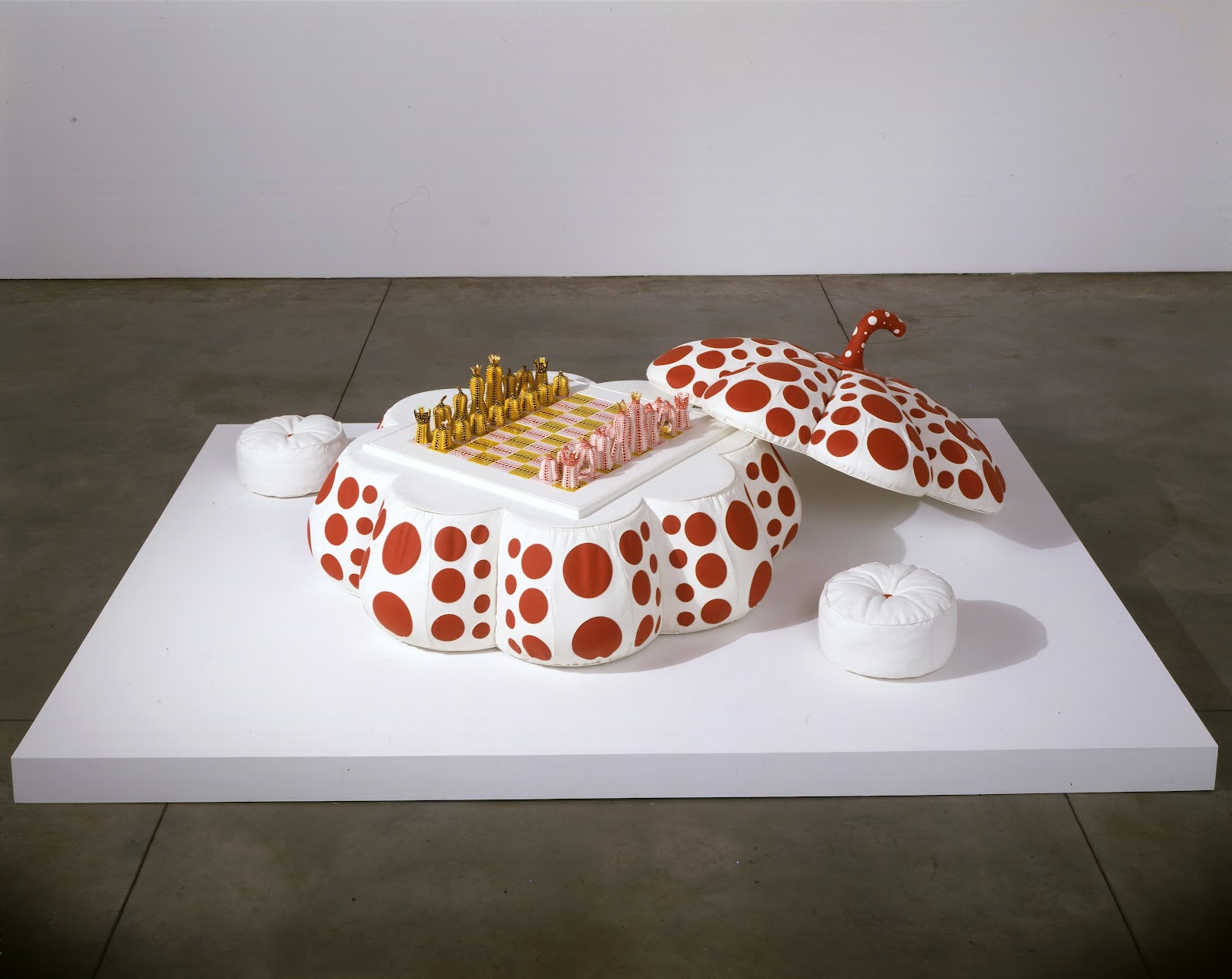 The greatest Duchamp reference of all is made in the
photograph to accompany Deadalive
(2003), the stained and polished oak stump set, with mummified and bronzed
frogs, birds and squirrels as playing pieces, created by Tim Noble and Sue
Webster. They took their macabre and eerie work out into the Gloucestershire
woodland by their farm, and were photographed at play, Webster fully dressed,
Noble naked. This is a restaging, with a twist, of the famous game between
Duchamp and the American writer Eve Babitz (known as Eve) in 1963, photographed
by Julian Wasser, and filmed by Jean-Marie Drot, in which it was Eve who was
naked, and, apparently, a little bemused that her opponent was so intent upon the
game that this detail largely escaped his attention.

Such is the fascination of the game of chess. Deeply
absorbing, and with an unparalleled longevity. Whether a player or not, there
is something for everyone in this exhibition.