Review of Pause: A Showcase of Emerging Fine Art at Blackall Studios, Shoreditch

For just four days, a collective of fifteen recent graduates from University College Falmouth have reunited to put on a group show, Pause, at Blackall Studios, Shoreditch. Not leaving any space unused, their works cover floor and walls, reach into the corners, stretch up to the ceiling, and extend downstairs, where the basement has been turned into a projection lounge for the video contributions. Although each artist has his or her own individual and idiosyncratic style and medium, there is, nevertheless, something of an overarching theme to this exhibition, both in the exploration of the relationship of the human form to its various natural, and, in some cases, less natural, landscapes (see in particular Mike Davies’ short film work, Headcase), as well as in a meditation on the question of how, and in which ways, fragments might be pieced together. 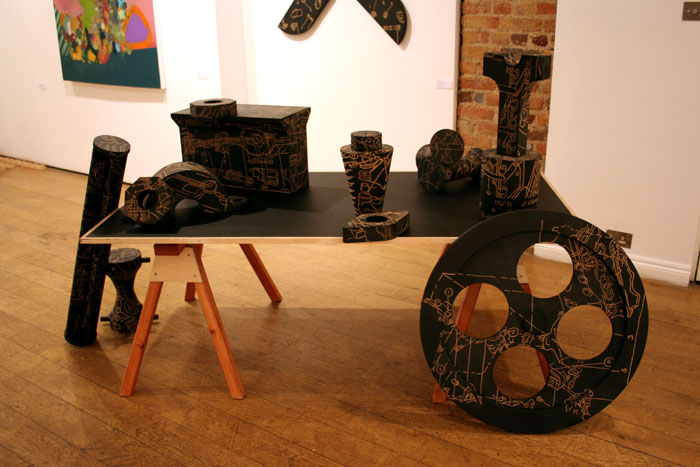 Take, for instance, Michael Dryden’s Assemblage. An installation of oversized MDF bolts, screws, and tools, painted with blackboard paint, and scratched into with smaller images of similar components, along with numbers, in the style of an IKEA flat pack assembly instruction leaflet. Indeed, on the wall beside the workshop table, is a book of his own versions of such technical drawings, entitled, aptly, Instructions. What one begins to wonder, when looking at this work, is to what extent construction equates with creation, particularly in light of contemporary discussion regarding artists who employ studio hands to put their ideas into practice. 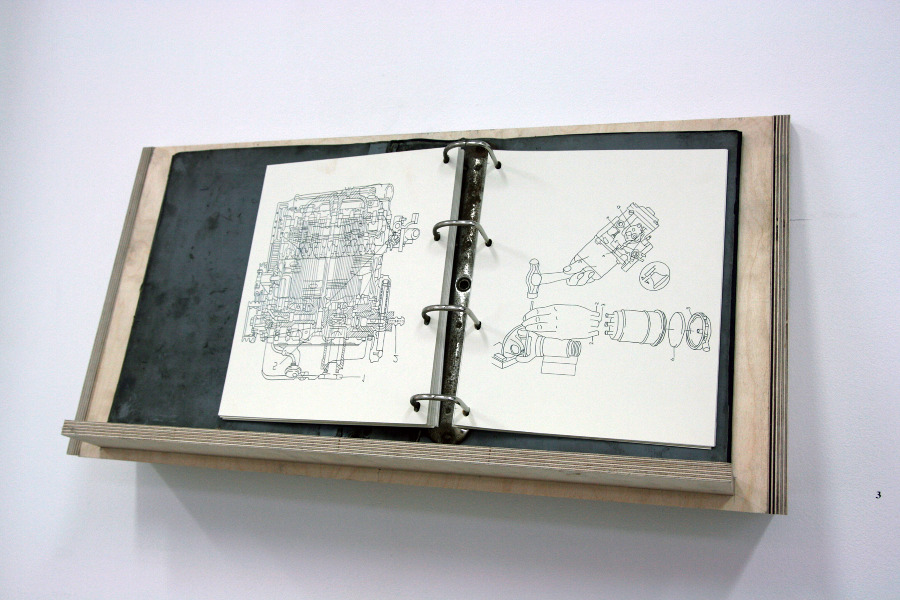 Similar echoes of the process of assemblage are found in Norman Buchan’s Nothing May Come of This, a series of towers built out of cocktail sticks, mostly neatly stacked, but some toppling a little, as if in a game of miniature jenga. Equally on the theme of games, Rhys Partridge’s Playing Cards x 52, painted over in shades of aquamarine, flesh and cream, are grouped seemingly randomly, and displayed like tiles on the wall. On the floor, in the centre of the gallery, a site which did indeed lead to some calamities at the private view, Reece Balfour’s Pool, Reservoir, and Basin, spread out into three different jigsaws made from tessellated trapezoid tiles: prints of his black and white drawings, placed on polystyrene, and protected by glass. The intriguing images, which are repeated over and again, show a boy – Balfour himself – lying, arms above head. Asleep or comatose? It is hard to tell. There is a flavour of the crime scene, and the puzzle could not be more puzzling. 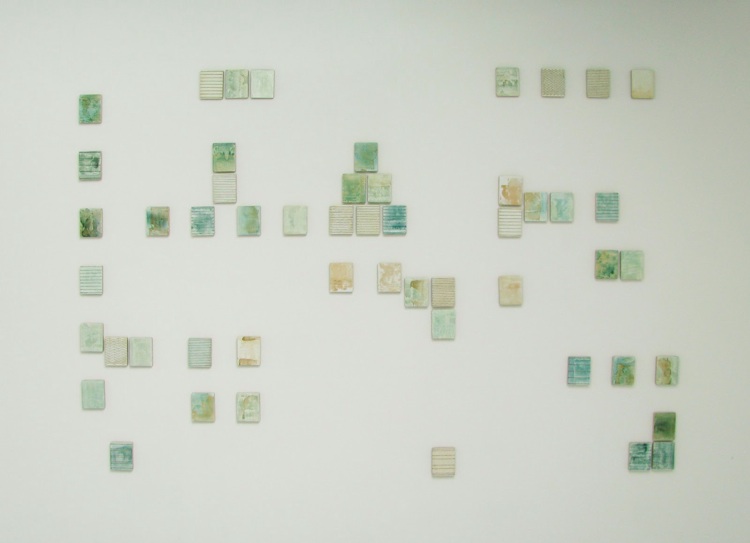 Print works are exhibited by both Becky Lewis, who overlays collage elements with intricate circular linocuts, and Abi Burt, whose delicate etchings are atmospheric and eerie, her tiny figures as spirited as biro doodles, and her backgrounds absorbing. In St Mark’s Tables, she turns to oil on board, but the figures remain as spindly as ever, almost Banksian, with their suggestive outlines and form, and the grey mist in the distance is heavy and thick. 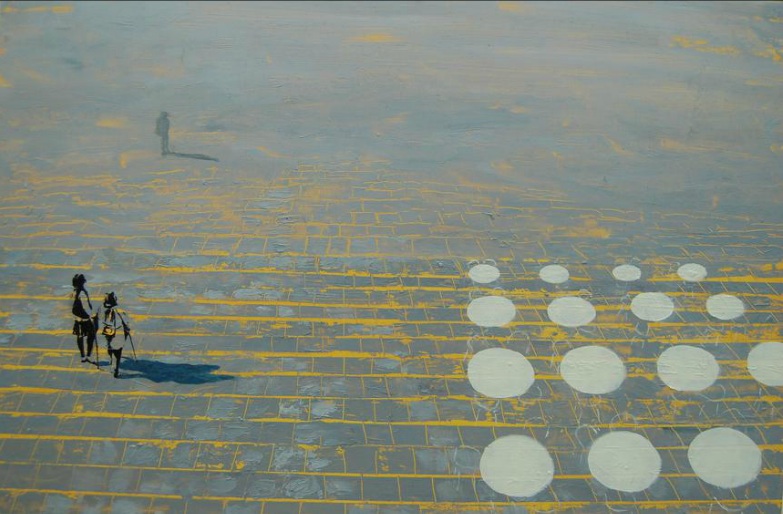 More energetic are the rhapsodies of abstracted colours fusing together on Lizz Dobinson’s canvases. Thick smears of oil and palette knife strokes: an interactive fiesta of colour, form, and movement.

Downstairs, Ed Sanders does something similar with his audio-video projection, Three Piece Round, the soundtrack for which is available on a CD entitled Between Music and Sound – a good description for the ambiguous cacophony: crickets, sounds of the natural world, but music in the background, and, of course, digital composition. The images which accompany this noise are blurred and unfocused too, again asking the visitor to figure out and fit together the pieces in his or her own head. 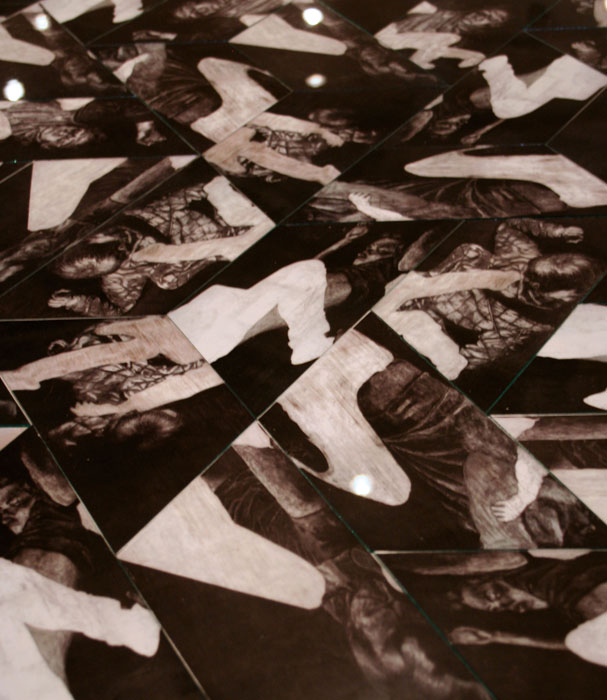 Probably the final work you will come to, at the very back of the basement, is Norman Buchan’s Learned, Inherited, Imitated, a green felt peg board with deflated balloons pinned to it, and the words IT WAS WHAT IT IS stenciled on to the side. The balloons’ heyday is past, but there they remain, symbolic of what once was, and constituting the outcome of something past. This might, of course, be seen as an apposite summary of the show itself, the conclusion of the group’s BAs, the outcome of their travails, but, if they, along with their audience, can figure it out and piece together the parts, the start, also, of something new.

mixed media on board