Review of Gravity and Disgrace at Blain | Southern

Gravity and Disgrace is a three person show, curated by Rachel Howard (born 1969), bringing her own work together with that of Jane Simpson (born 1965) and Amelia Newton Whitelaw (born 1984), and inspired by the Hayward Gallery’s 1993 exhibition Gravity and Grace: The Changing Condition of Sculpture, 1965-1975. The exhibition has, as its underlying themes, questions surrounding mental health and (in-)stability, something which is a common motif in Howard’s own work, not least in her Suicide Series, from which the two paintings on display here originate. Another key aspect, adopted from the Hayward show, is the exploration of materiality, and the rejection of traditional artistic media. 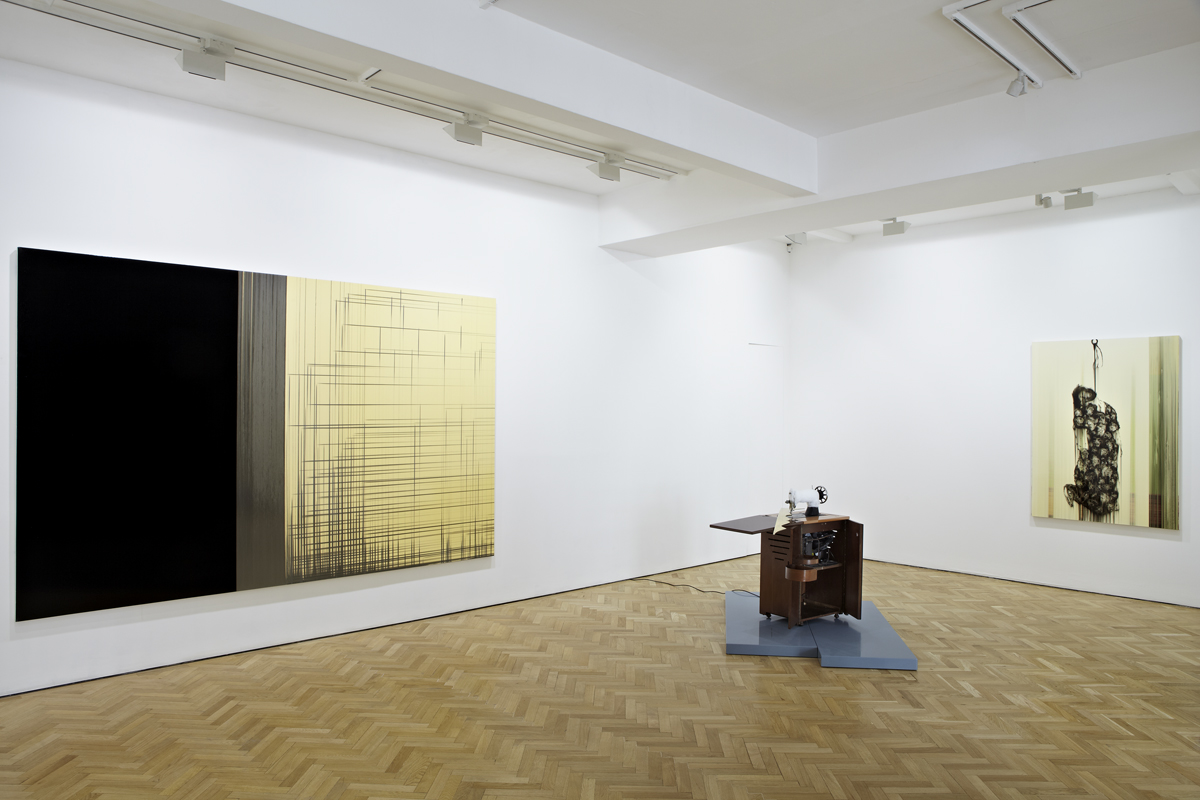 Upon entering the gallery, one is hit first and foremost by Newton Whitelaw’s sculptural triptych – not just visually, but also olfactorily. The youngest of the three artists, Newton Whitelaw has been working, for the past three years, with Anselm Kiefer in Paris. From him she has learnt an important lesson: not to be afraid of weight. Accordingly, she has introduced large pieces of stone (menhirs) into her work, and the example here, propped up solely by a twig, and held in tension by a pulley system comprising a rope, some netting, and a quantity of salt dough – from whence the “funky” (as she describes it) smell – which now lays splatted across the floor, an off-white cow pat of approximately two metres diameter, cracked across the surface like tectonic plates, and bubbled on the surface akin to ocean spume. The work, entitled There are no Accidents (2012), is as much a performance as it is a completed piece, since the dough, a substance which was used by the ancient Egyptians to preserve their dead pharaohs, was only added to the netting on the night of the private view, during which is was drawn through the net, and on to the floor, by the force of gravity. Even though now in one place, it will take two weeks to fully stop moving and to set. 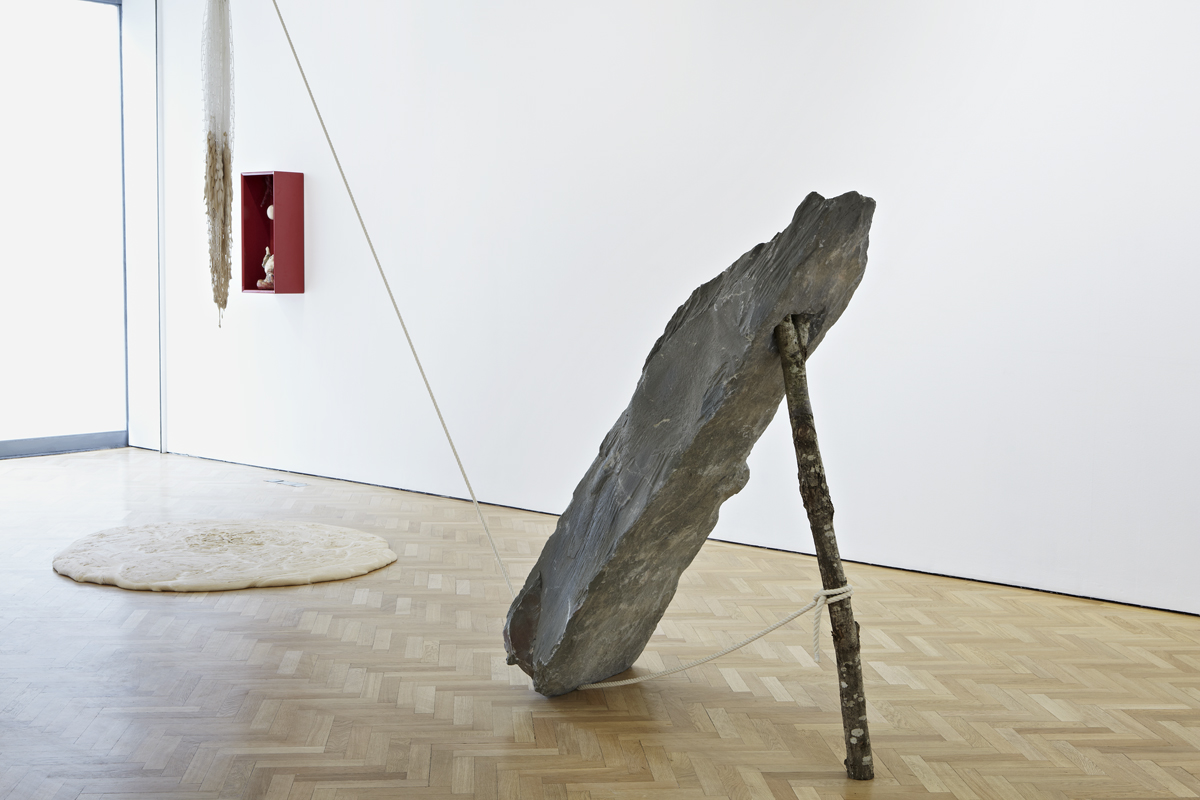 Simpson is somewhat less convinced that there will be no accidents when it comes to her work, A Wolf in Sheep’s Clothing (2008), for which she has rigged up a sewing machine covered in ice. There is no actual water source, however, and the moisture is taken directly from the air and chilled using a cooler underneath. As such, the sculpture responds rather like a barometer, melting if the temperature in the gallery rises, and growing as it cools back down again. Laid out across the machine’s table is what Simpson terms “a really polite dagger!” The idea of the piece is to create a sense of drama, both in terms of what is about to happen, and what might just have occurred. 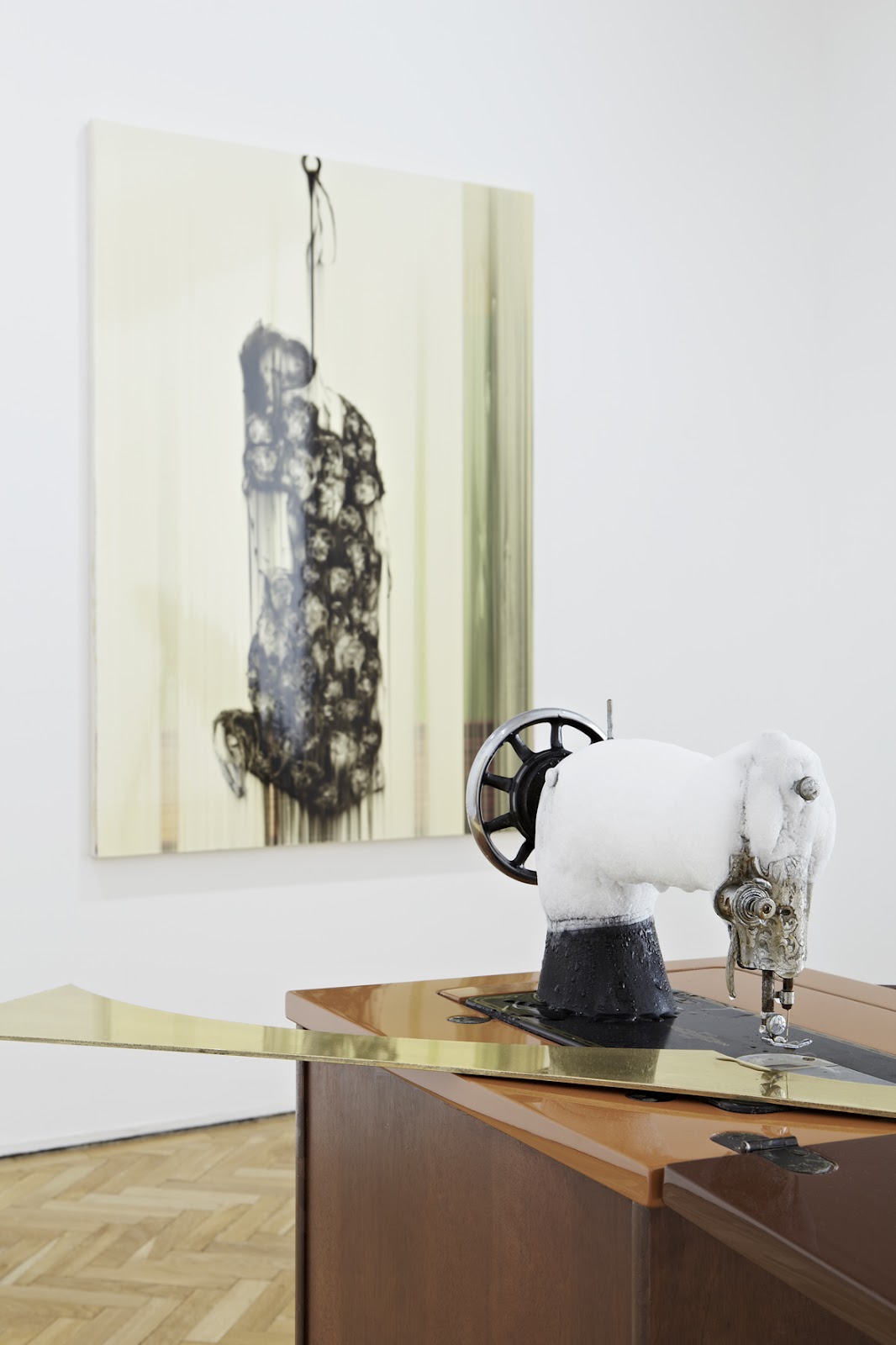 Both this tension and the 1950s periodisation carry over into Howard’s painting Eva (study) (2005), which hangs on the wall behind. Based on the first online forensic image she found during her Suicide Series research, depicting a real and tragic incident from that decade, the work depicts a shadowy kneeling woman, painted in black, set against a pale yellow background. Her dress is patterned and floral, and the sense of era is as heavy as the sadness of her desperation, and the added weight from the fact that, because she was kneeling, she might have chosen to save herself at any time. Howard’s second painting, Suicide Painting 4 (2007), works with the same colours, but is purely abstract. Her lines of black household gloss paint were drawn across the yellow background by gravitational pull, as, during the process of creation, Howard turned the canvas several times, allowing for the force of nature to play its part. It is, therefore, as much a work by gravity’s hand, as by Howard’s own. 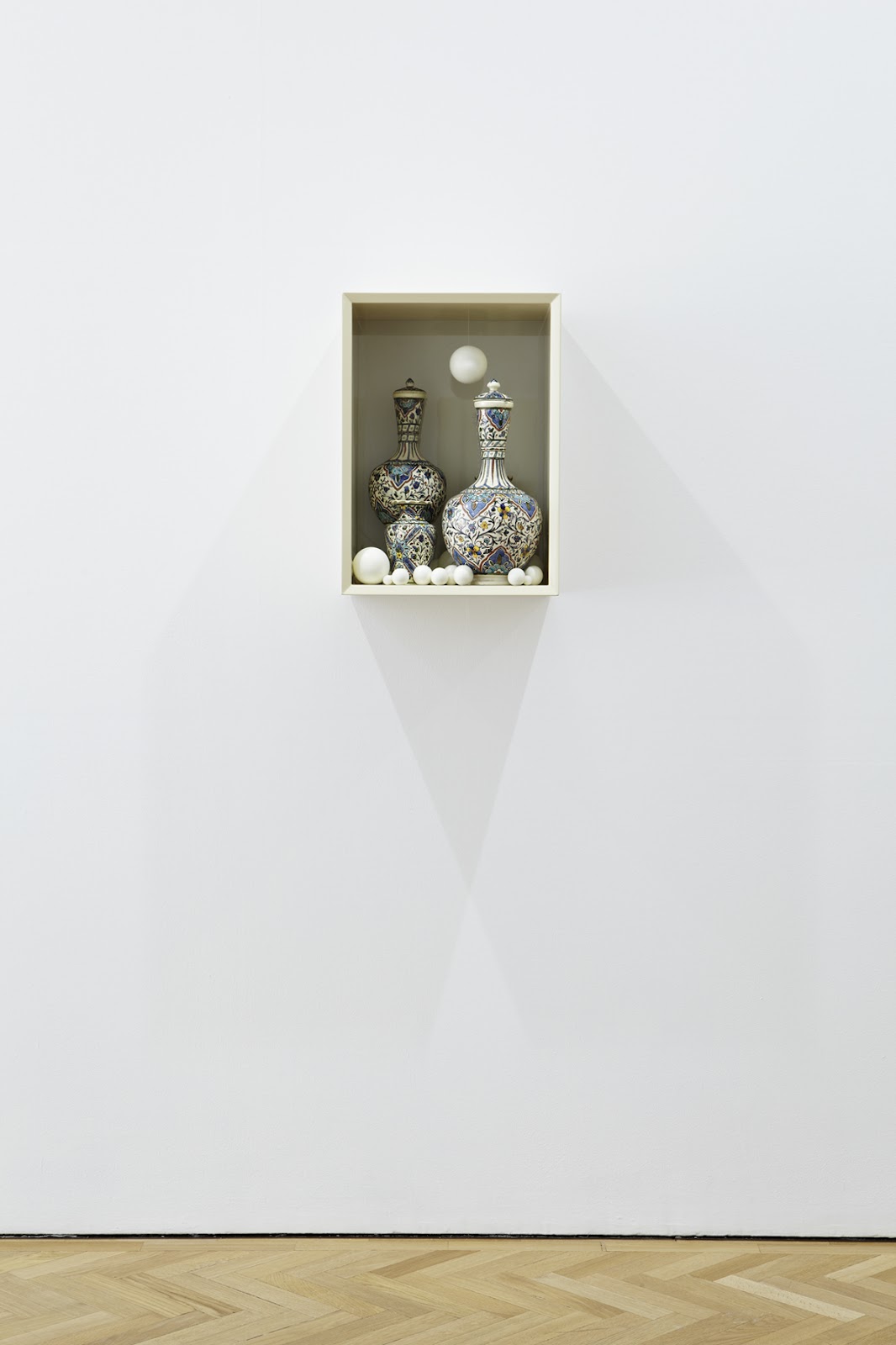 The final two works by Simpson consist of two small showcases filled with her mother’s antiques, Japanesey Moment (2008) and Turkish Delight (2008) respectively. Although some might see these as morbid, particularly since her mother is still alive, Simpson proclaims them to be “very positive” and “absolutely cathartic”, a releasing of the inheritance, and a setting free. Packed around the objects themselves are various egg-shapes and balls, suggestive perhaps both of polystyrene packing material, but also of reproduction, family lineage, and generations.

The works in this exhibition all carry their own weight, and all bear it well. Gravity may interfere, and, in some instances, even direct, but the result is far from a disgrace – the works stand proud and tall, telling their own, and others’, stories.

Images courtesy of the artists and Blain|Southern