In what is now his second international project, Israeli curator Sharon Toval has teamed up with London-based Nimrod Vardi to undertake an exciting creative experiment, in a virtual art laboratory, the physical outcome of which can now been seen in Vardi’s Arbeit Gallery on Helmet Row, just around the corner from Old Street Station. Pairing up three Israeli artists with three Brits, and giving them a very basic starting point from which to proceed, the collaborative process then evolved over four months, during which time the pairs shared and exchanged, created and destroyed, added to and erased their co-produced works via a system of online studios. But to what extent was each artist able to let go of his own sense of subjective authorship and the right to possess and protect his work, and how far could he submit to the experience of mutatis mutandis at the mercy of another pair of hands?

The journey of each pair was very different, and this can be seen not only in the works on show, but also in the feedback provided on the process, which, according to all concerned, was a more significant part of the experiment than the resultant exhibitions themselves. (There will be a second show, following on from and referencing this one, albeit with the pairs having been “reshuffled”, in the cooperative art gallery Alfred, in Tel Aviv, in October.) The couples, who only met in person at the point of installation, spent an intense few months creatively influencing and merging with one another, or, in some instances, not. The artists’ talk at the gallery, on 22 July, provided an interesting snapshot of their resultant relationships – rather like the post-event evaluations and moments of truth on “Blind Date”!

The collaboratively most successful “couple” was Israeli painter, Abraham (Avi) Kritzmann, and London-based mixed media artist, Cos Ahmet. From the very beginning, the two found themselves so well aligned that they even often independently thought of uploading the same images to their virtual databank. During the ensuing artistic conversation, or “visual ping-pong”, Kritzmann says: “I was not even thinking ‘What would Avi do?’, but ‘What would Cos and Avi do?’” “You have to be really responsive to the other person,” adds Ahmet, and it was a case of working “stack and layer”. But, as they sit side-by-side in the gallery, in front of their joint output, they seem content with how things went. Their work is further symptom and proof of this, with the largest piece, Incision, depicting two mirror image bodies, organs exposed, united by a reel of black and white intestine, entwined and coiling from one to the other, symbolic of a process of symbiosis or twinning, the merging of two distinct entities to become one, just as in the case of the artists themselves. 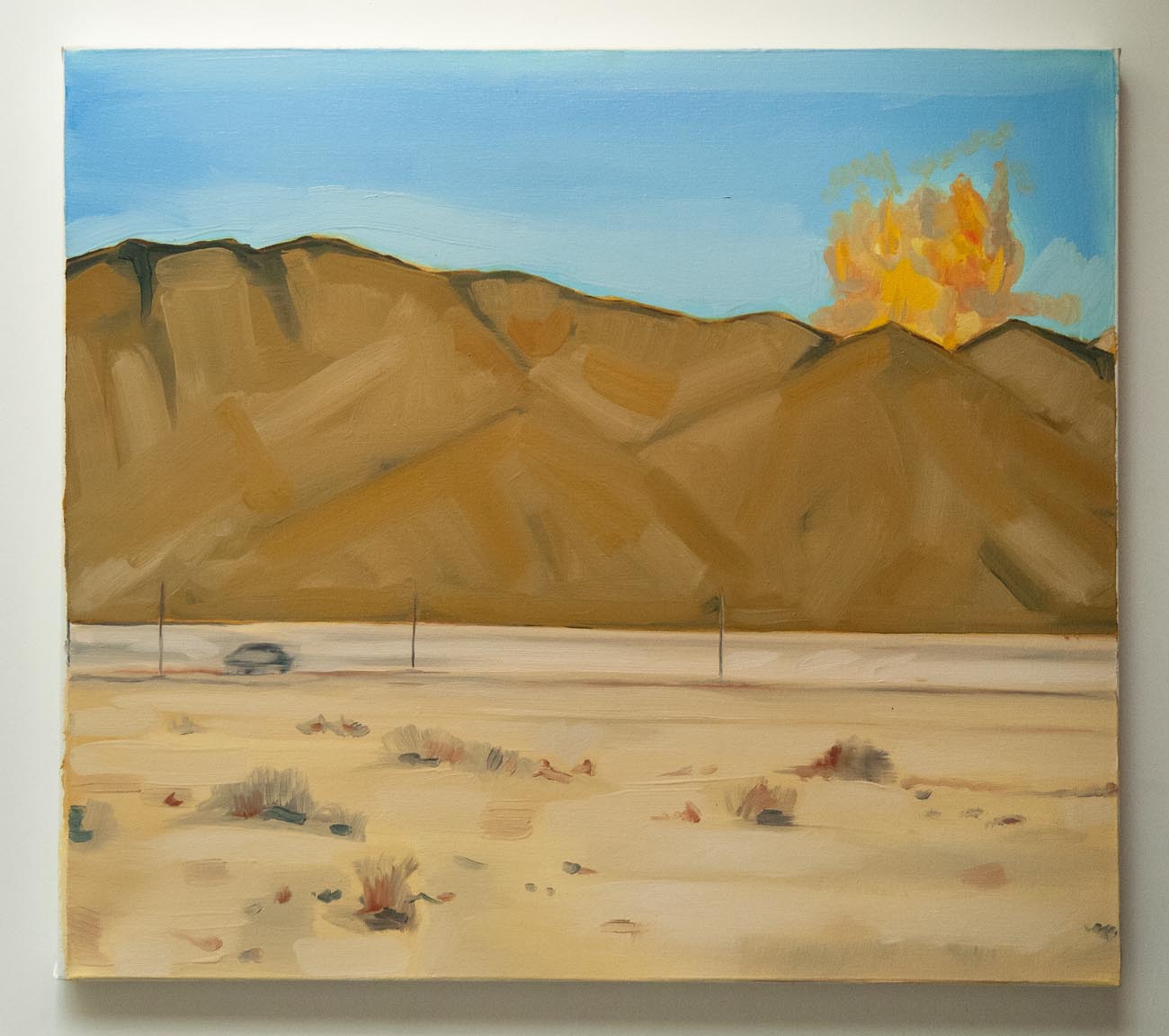 In the case of painters Orly Dvir and Daniel Bourke, however, the journey of each artist, although commencing from a starting point of shared technique, led in a very different direction. Dvir confesses that she was unable to distance herself from her cultural context, and her work, Aqaba, reinforces this, with its depiction of the heat of the Israeli desert: arid, barren, yellows and oranges, and flames. She and Bourke ended up exhibiting separate works, with his two paintings of near-photographic tulips against abstracted, geometrically divided, blue and white backgrounds being as far from her desert imagery as conceivable. The pair is sitting apart, either side of Toval, and each is underlining their differences. The process, according to Bourke, was “difficult” and “frustrating”. Nevertheless, he feels he learnt a lot from the experiment, and that the collaboration and communication – represented here by the inclusion of a blog of their virtual dialogue – did effect a change upon his working method. 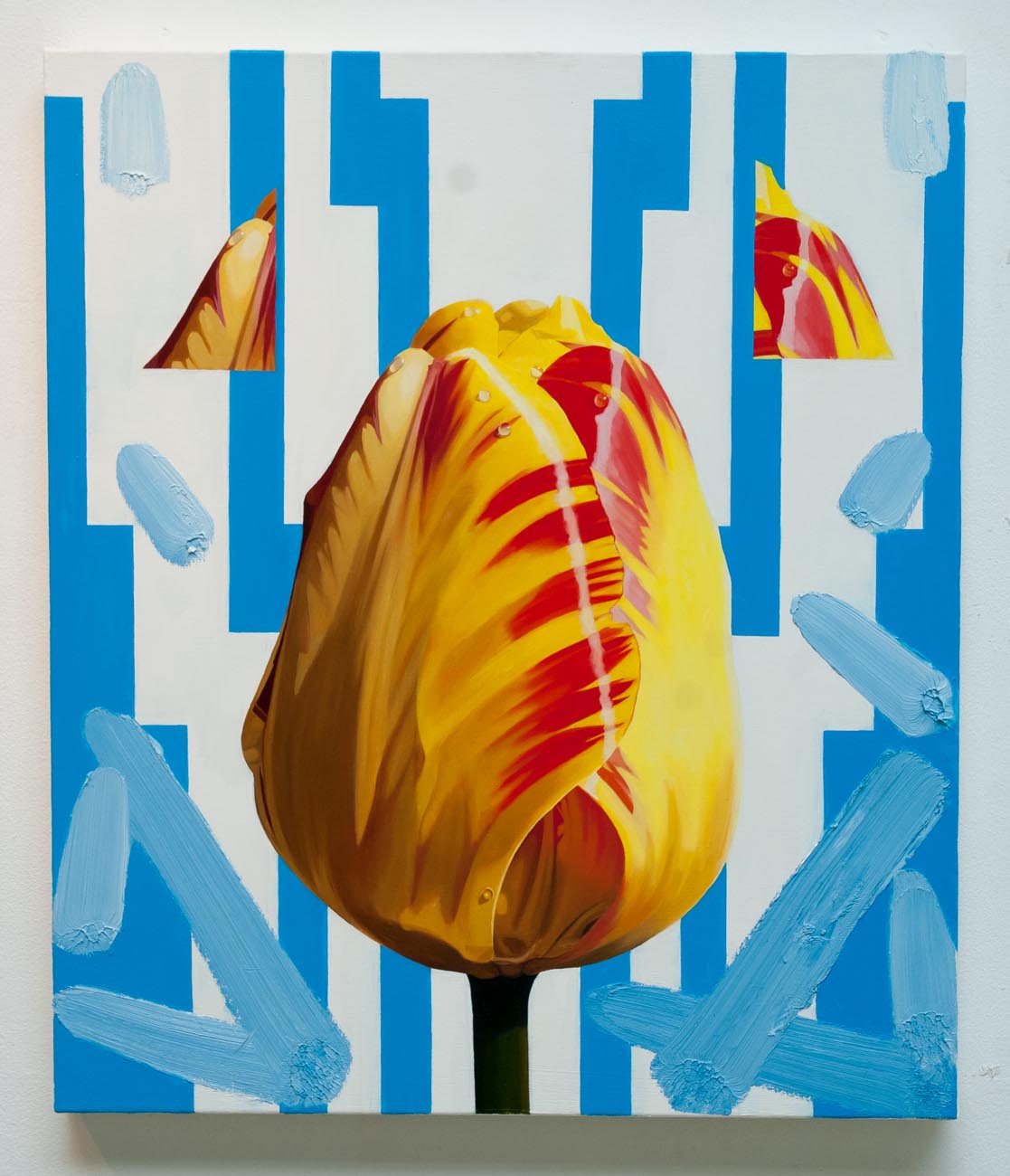 Finally, there is photographer Barak Brinker, who ended up working alone after his partner, Leonie Lachlan, abandoned the project two months in. His works, a two-and-a-half minute film loop, Seagulls, portraying a dark night sky above crashing yellow-tinted waves, with white gulls bobbing back and forth, and three black and white inkjet prints, contrasting floodlights and shrouded skeleton scaffolding, all reflect the lonely void he felt when left “working with a ghost.”

The exhibition is interesting, not least for its creative journey, and I shall certainly be following it to its Israeli completion. The notions of objectivity and subjectivity were pushed to their limits, and these limits were shown to be different from case to case. Toval lays claim that “the notion of possession of an artwork was completely erased,” and that the work instead began to define itself, directing its own destiny. However one sees it, the experiment was clearly a success, even where the non-mutual output might suggest otherwise: asked if they would do it again, there was a resounding yes from all corners.

Abraham Kritzmann and Cos Ahmet