Review of Stephen Willats: Surfing with the Attractor at the South London Gallery

Stephen Willats: Surfing with the Attractor

“You are in a street, any street, as you move forwards you are bombarded by a multi-sensory experience of random inputs happening at all levels simultaneously. How do I make sense of such confusion? Do I reduce those inputs to what at any one time I can accept as order, my order in relation to society’s order? The reduction in what I am attending to, so as to create perceptual coherency is tantamount to a model, a model that will infer a wider spectrum of references, and as I start to progress down that street so the model I have will continually change according to what I encounter.”[1]

It is thus that pioneering conceptual artist Stephen Willats (born 1943) describes the experience of walking down a street, and begins to elucidate his model for a “concept frame” in which the fragments of this experience might be pieced together to form a sequence, or “data stream”, which builds up a larger picture of the event.

“The conjoining of these random fragments creates a picture, a dynamic one in real time, but each person at the same spot in that street will see a different picture, maybe similar but nevertheless different.”[2] 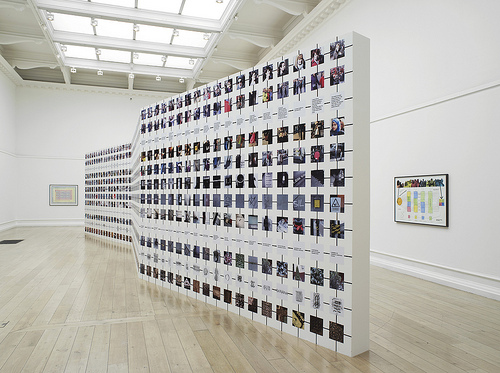 In his current exhibition, Surfing with the Attractor – his second show at the South London Gallery, after a gap of 14 years – Willats presents just such a picture, juxtaposing two very different street walk experiences: one down Rye Lane in Peckham, and one down Regent Street in London’s West End. The results are presented both in video format, on two monitors mounted on plinths in the corner, and also on a monumental scale, as images and words, linked together by arrows, on a huge 15 metre long wall built down the middle of the gallery. Collaborating with 14 London-based artists, Willats allocated each a medium (camera, audio, rubbing) and a channel (facial expressions, street signs, sounds) with which to record their experience. They then assembled on location and walked en masse down the streets, each recording at will, as long as they remained within their designated frame. The results were then digitised, compiled, edited, and assembled to produce the data streams on display here.

Reading across the wall, the viewer follows the different snapshots made within each channel, and reading downwards, he can experience different viewpoints of one frozen moment in time. Each visitor can choose his own walk and create his own experience of the street, thus mirroring the reality of the myriad different individual experiences possible of any one given reality. 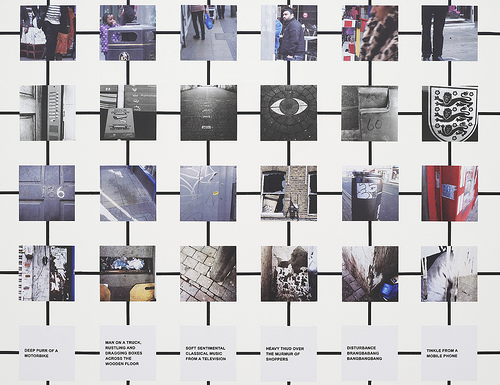 The wall depicts faces, signs and symbols, blurred images of passing pedestrians, push chairs, CCTV cameras, litter, graffiti, flowers and cars. No angle is left unexplored. There are also words immortalising snippets of overheard conversation and ambient sounds, such as “meat cleaver. Thud thud. * Gap * Thwack thwack.” (In case you couldn’t guess, this one belongs to the Rye Lane stream!)

There is, of course, an intentional contrast between two such different streets.

As Tom Morton suggests: “Regent Street and Rye Lane might be said to represent, respectively, affluence and poverty, the city’s famous centre and its forgotten periphery.”[3] Yet it is not immediately obvious which is actually which. Both are very multi-cultural, albeit one primarily in its mix of inhabitants, the other in its assorted tourists. There are also some images which recur on either side of the wall, such as street signs, pedestrian crossings, and bus stops. The difference, however, becomes more apparent in the words used to describe the background sounds, and, of course, in the shop signs.

Also on display are diagrams discussing the framework used to produce these data streams, which formed part of the process of Willats’ earlier South London Gallery exhibition, Changing Everything (1998). Comprising networks of arrows, words and geometric shapes, these illustrations look like something which might be taken directly from a sociology textbook. Certainly, they reflect the artist’s interest in creating a cultural model of how art might relate to society. One pencil and watercolour diagram outlines what he labels “four concept frames with four axioms – four levels of resolution,” which, in turn, he pinpoints as “presence, identity, behaviour and fabric,” and “beliefs, goals, norms and values” – all key ideas behind the works in the exhibition. 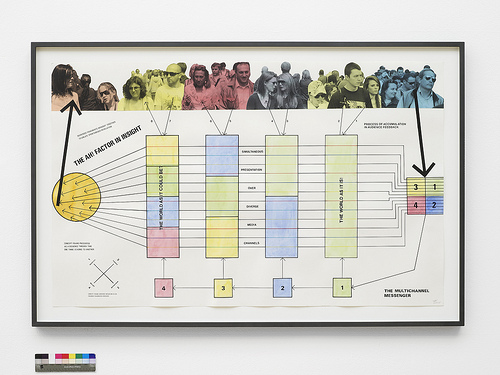 Other works from the 1998 show are also be re-presented, including a 14 screen TV tower showing filmed walks between the gallery and the now no longer extant North Peckham Estate, which was the “experiment”, or “art work”, which initiated Willats’ model reemployed this time around. 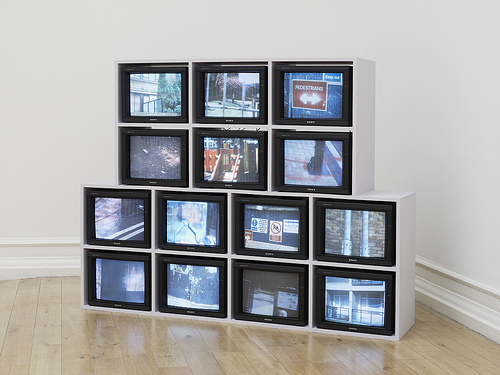 To further reach out into the local community, films of the new data streams are also being shown on monitors in two nearby shops – Persepolis on Peckham Road and the hardware shop on Camberwell Church Street. The idea is to examine the function and meaning of art in society by actually taking it out there, beyond the gallery space. Hopefully, in return, passers by might become curious enough to cross the threshold into the gallery, even if it’s not somewhere they ever would have found by themselves.

The use of multiple media and simultaneous presentation captures the dichotomous gulf between the limited perception of an experience by each individual and the (im)possibility of a collective perception. Juxtaposing word and image, and time and place, Willats’ work is both art as documentary, but also art as something creative, offering insight into, as one of his diagrams further puts it, “the world as it is versus the world as it could be.”

[1] from Stephen Willats, “Living with the Data Stream,” essay in catalogue to accompany the exhibition, p.31

[3] from Tom Morton, “Only Connect”, essay in catalogue to accompany the exhibition, p.41

Installation views of Stephen Willats: Surfing with the Attractor at the South London Gallery