Review of Alberto Burri: Form and Matter at the Estorick Collection of modern italian art

Despite considerable international attention during his lifetime, and being hailed in the USA as a significant influence on the abstract expressionists, Alberto Burri (1915-1995) has been largely overlooked in the UK, and the current exhibition at the Estorick Collection is his first major retrospective in this country. 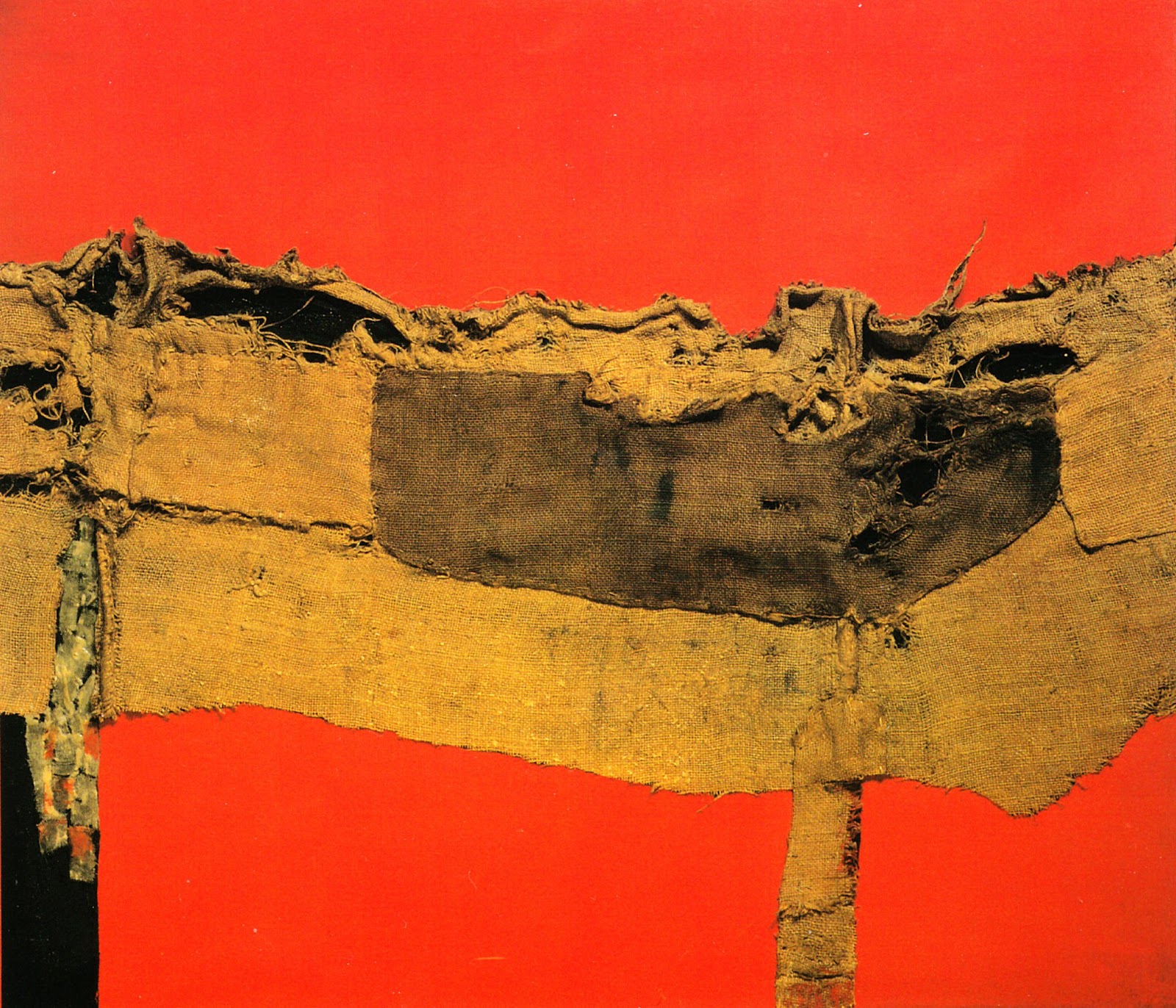 Although the exhibition opens with some of his more rare figurative works from the late 1940s, the main body of the show focuses on his experimental abstract works, using a variety of materials, including sacking, cellotex (a type of insulating board), sand, sawdust, PVA glue, pumice stone, iron sheets and tar. In part inspired by Umberto Boccioni’s Technical Manifesto of Futurist Sculpture from 1912, which called upon artists to reject their exclusive use of “noble” materials such as bronze and marble, his incorporation of such common or garden materials was a clear forerunner of the arte povera movement of later years. Burri himself was, however, labelled as a leading protagonist of art informel, a European-wide trend which focused on the artistic process itself, as much as on the finished work. It is perhaps not surprising then, that, in 1954, he also began to work with fire, scorching his materials, thereby incorporating a greater element of chance into the procedure. 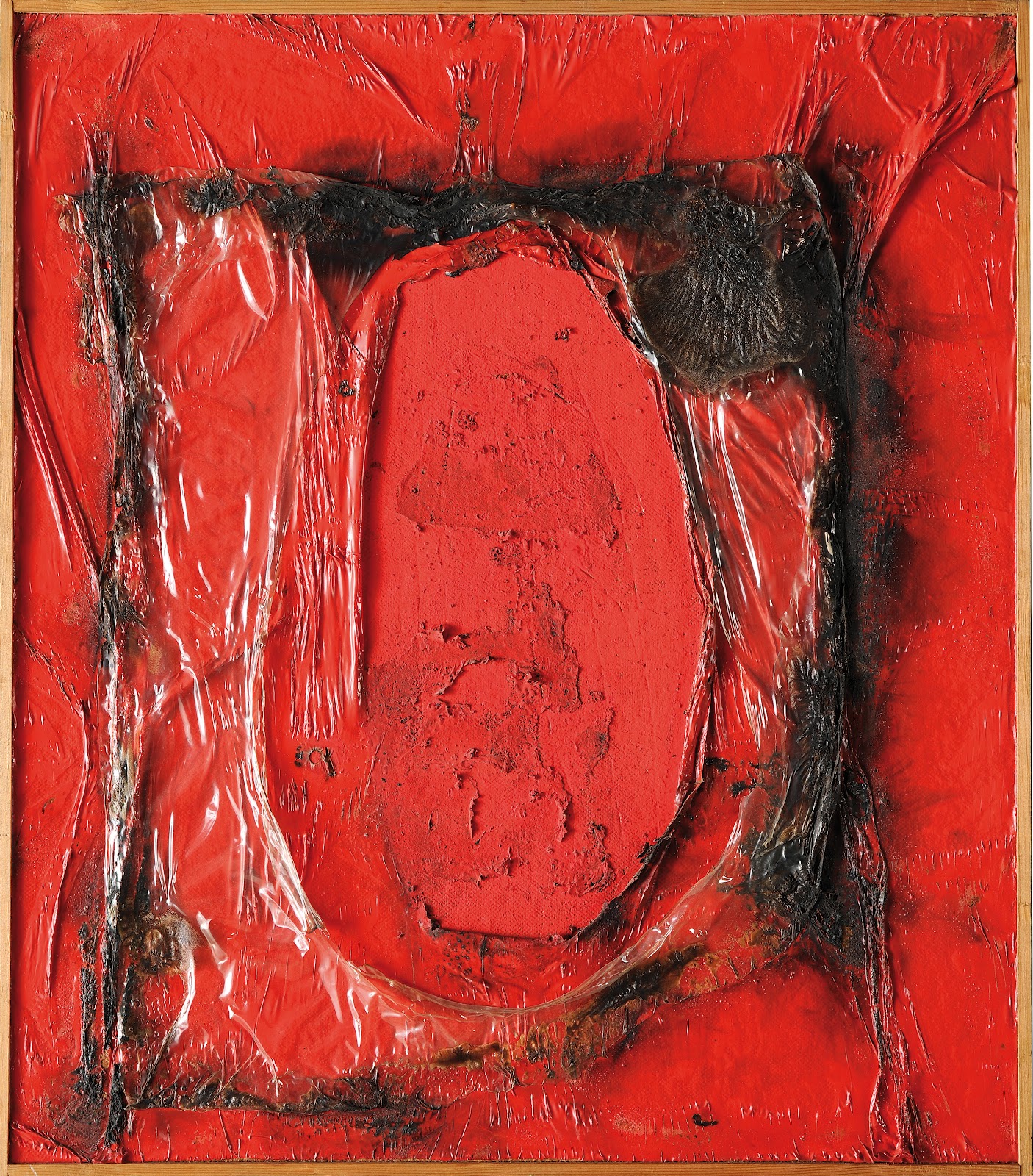 Born to a wine merchant father in the central Italian region of Umbria, Burri was trained in medicine, and served in the Second World War as a doctor in North Africa. From 1943 until the end of the war, however, he was interned in a prisoner-of-war camp in Hereford, Texas, which is where he first began to paint, turning to it as a replacement career in 1946. This background has clearly exerted an influence on his work, with his palette remaining simple, and comprising blacks, reds, and browns – the colours of heat, dryness, and blood. Red Plastic (1961), for example, made of plastic, acrylic, and scorching on cellotex, has a distinct medical look to it, with the wrinkled and shrunken plastic appearing like stretched skin, and the red as vivid as highly oxygenated blood. Similarly, many describe his sacking works, torn, wrinkled, rumpled, glued and sewn together, as resembling lacerated and stitched flesh. This is certainly a plausible impression, but not necessarily what Burri himself intended in his “poetic exploration of matter.” 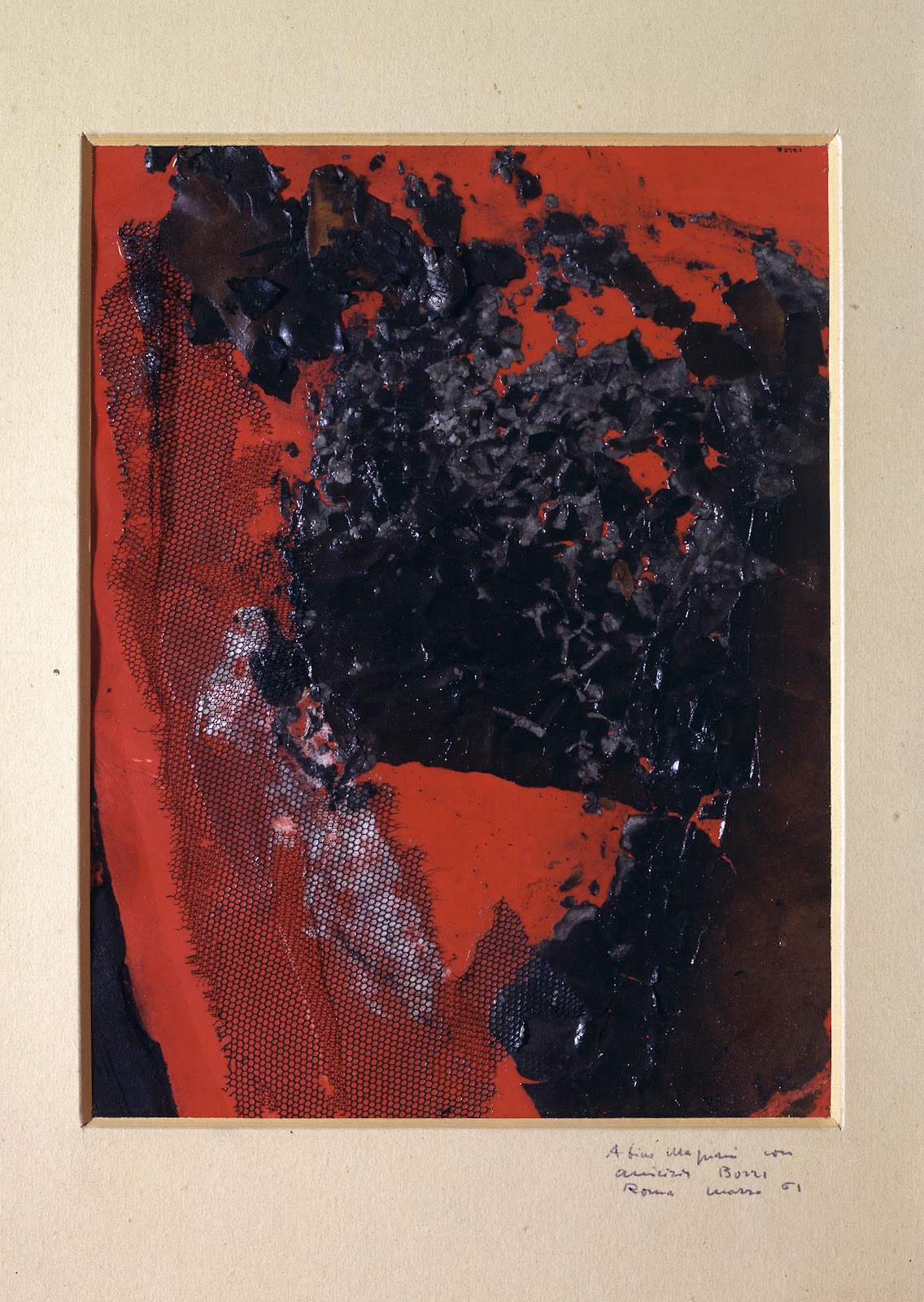 The effects of charring in works such as Combustion (1958) (a title and date borne by several works in the exhibition), where pieces of paper are overlaid, creating a collage-like result, are dark and all-consuming, but actually not altogether different from the deep blackness of his paint and tar works (Tar II, 1949; Black T, 1951), and even from his later Black Plastic Combustion (1964), made of scorched plastic on board, which, even close up, could easily be mistaken for very very thick swirls of oil paint. It really does seem, then, as if Burri’s main concern was with experimentation with different materials and processes, with composition and with form, and not so much with representation or reference – even his titles refer to the materials and processes used.

In the 1970s, he produced a series of white work called Cretto, using cellotex surfaces, cracked with deep fissures, dehydrated and parched like the deserts of North Africa. Again, this is applying biographical detail where it maybe isn’t intended, but the intruding inferences are hard to overlook. 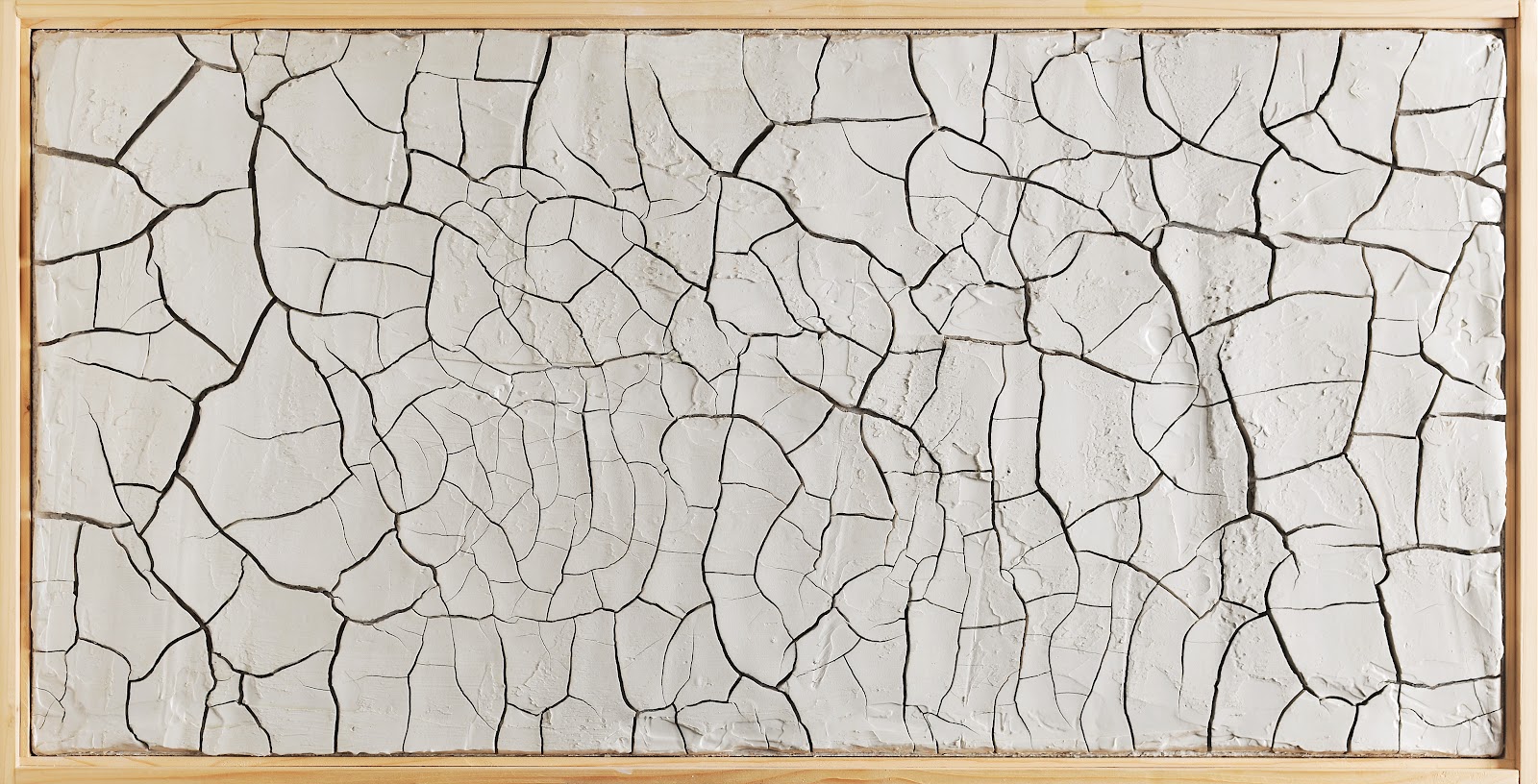 This is an exhibition which both invites and defies criticism. Faced with the works, one is overwhelmed by so many impressions and possible interpretations, feelings and responses, that a written account could almost never end, yet, at the same time, Burri himself insisted: “Words are no help to me when I try to speak about my painting, they talk around the picture. What I have to express appears in the picture.” And, so be it. I shall say no more. Go and see for yourselves!

Acrylic and hessian collage on canvas