Review of Vika Verb: From Womb to Womb at East Gallery, 214 Brick Lane

Vika Verb: From Womb to Womb

bird. woman. egg. Such is the title of two of the works in Vika Verb’s first solo show, taking place in East Gallery, nestled amidst the vintage treasure troves and multitudinous bagel shops at the lively northern end of Brick Lane. And, indeed, these motifs recur throughout her works, across many different media, as she experiments eagerly for ways to capture a certain lightness, and, as she herself phrases it: “In a world dominated by reason, profit and logic, […] to search for and revive the true meaning of femininity and its inherent value.”

The theme, one of cycles, periods, and women’s lives, with which she has been working for a couple of years now, has become very personal. In fact, she confesses to feeling not only exhausted, but also something of an emptiness, and the need to turn to something else for a while, having poured herself into these creations. The main set of drawings, encapsulating the subject of the show, is Cycles and Periods (Blood, Entry, Fruit, Ground), a set of four drawings representing the four cycles of a woman’s life: her first menstruation, her first sexual encounter, child birth, and the menopause, two of which Verb has already experienced, two of which she felt able to imagine through a sense of collective memory passed down from her female ancestors. The drawings, made, as is preferred by Verb who finds acrylics and oils too heavy, in ink, are intricately detailed and overflowing with symbolism. Her use of silver leaf brings to mind jewellery and femininity, the foliage has something organic about it, and the patterning is almost prehistoric – a term Verb repeatedly employs when talking about her work and subject matter. She is looking back to a time when women weren’t dominated by men, when femininity was about spirituality and a sense of connection. In tribal ritual, sacred objects may not be touched by menstruating women, and this is not because they are felt to be dirty, but, quite the contrary, because they are seen to hold such power that it would be impossible not to disrupt the weaker masculine power of the object. This sense of ritual is all too present throughout Verb’s work.

Take, for example, the works I mentioned already, bird. woman. egg (I, II) and the related Metamorfishes (I, II, III). These came about after Verb found a dead bird lying in the street and felt compelled to pick it up and take it home. Unsure what to do with it, she kept it for a while in her freezer. She was then inspired to go on a trip to Epping Forest, bird in tow, along with some fish and some eggs. Once there, she stripped bare, and took a reel of photographs of herself and the objects, setting the timer and running to take up position, thus scarcely having time to pose, and certainly not to ensure focus or composition. The outcome is beautiful and natural. For bird. woman. egg (II), the visitor is invited to click through a slide projection show of images revealing Verb’s own body, the bird, the eggs, leaves, foliage… Is this sexual? No, not at all. It is a simple presentation of the body, the feminine, and nature. Somehow, in modern society, nakedness has become taboo, especially of women. But this is a celebration, a return to our roots, a recognition of life and where it comes from. Metamorfishes (I, II, III), originating from that same excursion, are a set of black and white photos depicting Verb and two fish in the forest. In the first, she holds them over her eyes; in the second, in her ears; and, in the third, over her breasts – a female version of the Japanese three wise monkeys and the proverb they embody – “see no evil, hear no evil, speak no evil” – whereby the element of speech, for women, who traditionally speak less than their male counterparts, is replaced by the suggestion of nourishment provided for their offspring? 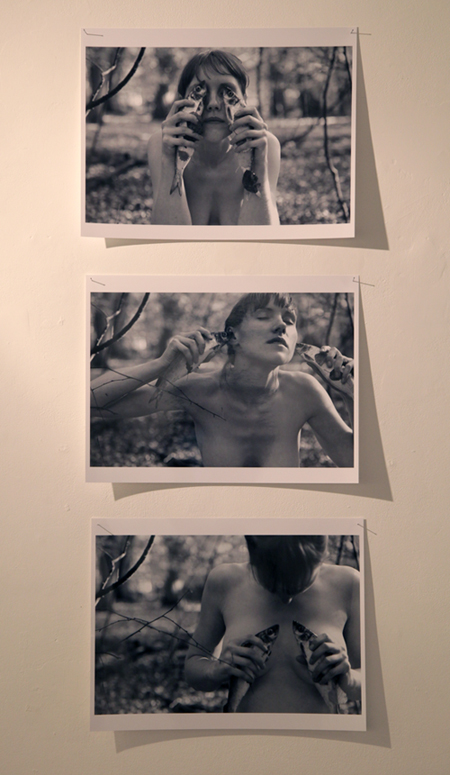 Eggs recur again in 192 eggs, a tribute to all those ova women lose each month of the year, and named according to the number of periods Verb has had to date. A wicker basket containing (near enough) the said number of (hens’) eggs is watched over by two papier mâché faces, casts of the artist herself, wrapped into fabric bodies, contorted, clawed, and with long tails. They may look arguably like lizards, but Verb contends they are, in fact, birds, since birds are where it all begins: bird. woman. egg.

Ideal Imperfections is a series of prints, taken from the first menstruation drawing which, for Verb, epitomises the concept of “womb to womb”, and of the umbilical connection between us all, each one containing a deliberate error. Printmaking, she explains, is a very masculine technique. It is all about precision: lining up the paper, having the watermark where it should be, applying the right amount of ink. Mistakes, on the other hand, are typically associated with women (think of Eve in the Garden of Eden), and so this deliberate subversion reclaims the method for womankind. A new experience for Verb, printmaking offers her the chance to work with what she loves most: lines. “Lines are what are most important to me. Not colours. Lines. Lines and dots. Dots free me. I like to get to a state where I don’t analyse.” 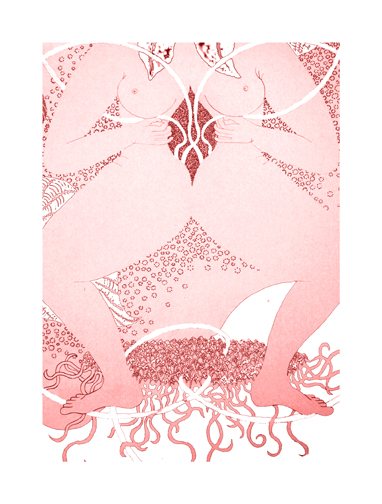 In fact, she likes to get to a state where her works take on characters of their own, with whom she can converse. In Dreams of a 700-year-old Woman, ink blots are transformed into creatures, strange and surreal, often blurring features of various species. Asked why she mixes abstraction and figuration like this, Verb explains that, for her, abstraction is about emotion and feelings, but, to have feelings, you need a character. Thus it is all about releasing that character and finding the narrative. Telling the story. 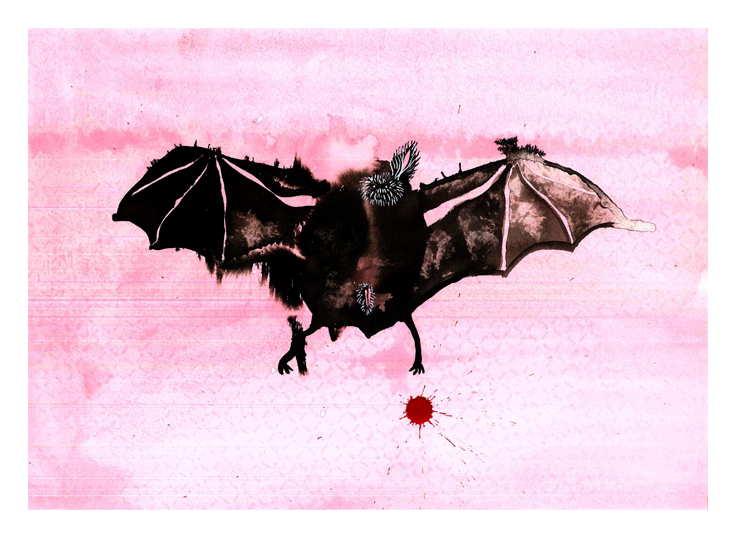 The question might be, whose story is it which is being told? Is it purely personal, or is it one belonging to all of womankind? For the most recent work included in this show, Lunar Drawings (first to twenty eighth), Verb read her lunar horoscope daily for a month, considered its predictions, and then, at the end of the day, produced a drawing reflecting both on this, and on what actually happened in reality. Again, strewn with a menagerie of creatures, many revealing bright red vulva, some in a state of transformation, “they act as a reminder that every female has the power of the moon, of the animals, of the fish, of the plants. It’s a shame we don’t use it now. As soon as women start to fight for their rights, they become male. Aggression of this sort is not feminine. We have the power, but we should look inside ourselves and find it there.” A return to prehistoric feminism? A celebration of nature and spirit. An exploration and experimentation with many different techniques. An artist to keep an eye on.

Print from the series Ideal Imperfections