Review of Pipilotti Rist: Eyeball Massage at the Hayward Gallery

Born in Switzerland in 1962, Pipilotti Rist, acclaimed as a pioneer of video art, has often also been pigeon-holed as a feminist artist because of her repeated use of the female body as both landscape and subject matter for her work. “Politically,” she agrees, “I am a feminist, but personally, I am not. For me, the image of a woman in my art does not stand just for women: she stands for all humans.”[1] And, indeed, her work is a visceral celebration of the human body, both inside and out. 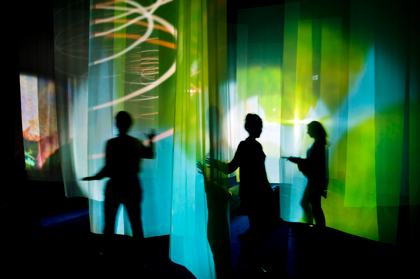 Her current survey show – her first in the UK – which fills the Hayward’s ground-floor galleries, and spills out on to the terrace and into the toilets and café, brings together over 30 works, from when she burst on to the international art scene back in the 1980s, to today, including a number of especially commissioned pieces, one of which was not finished until the morning of the press view. There is nothing conventional about any of them: both content and placement deviate playfully from visitors’ expectations. So, for example, in Yoghurt On Skin – Velvet On TV (2009), we are confronted with tiny LCD screens hidden inside shells and handbags, whilst Pimple Porno (1992), a 12-minute video loop of a man and woman having sex, is buried inside a child’s cot, and Selfless In The Bath Of Lava (1994) projects up through a tiny hole from deep beneath the ground (“We had to dig down 200 metres below the Southbank and bury a woman who is now held there in purgatory” jokes Rist). 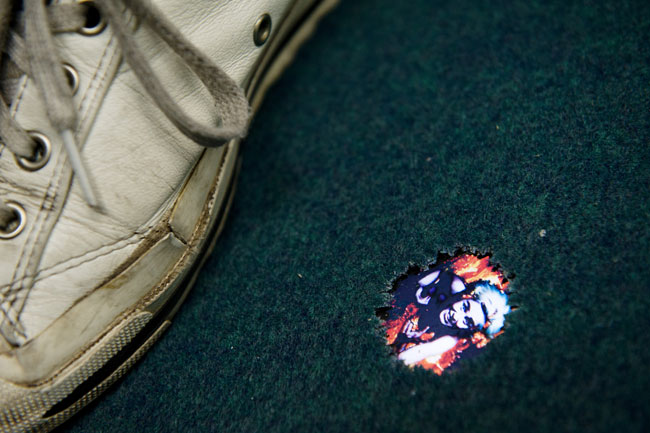 Several works are also projected across the gallery floor so that visitors can move in and around them, becoming part of them. Amongst these is Mutaflor (1996), in which the camera draws near and enters a naked Rist’s mouth, is ejected through her anus, and then loops right back to her mouth. In a similar vein, Digesting Impressions (1996), projected onto the abdomen of a dangling swimsuit, takes us on an endoscopic journey through the oesophagus, stomach, and intestines. There is more to this work than just a document of the bodily process, however – it might be taken as symbolic also of the digestion of information and the impressions with which we are continually confronted from the world around us.

The abdomen is perhaps the most significant part of the body for Rist: “This part of the body is very sacred, as it is the site of our entrance into the world, the centre of sexual pleasure, and the location of the exits for the body’s garbage.” As such, she considers underpants to be “the temple of our abdomen,” and this might help explain their proliferation in her sculptural works. Created specifically for the Hayward, Hiplights or Enlightened Hips (2011) consists of 300 pairs of pants in various sizes, individually lit from the inside, and hanging on a washing line outside the gallery. Inside, the first artwork one encounters is a giant chandelier, Massachusetts Chandelier (2010), also created from a large number of undergarments, but this time lit from the outside by projections. “I have no pants anymore!” jokes Rist, pulling down her trousers a little. 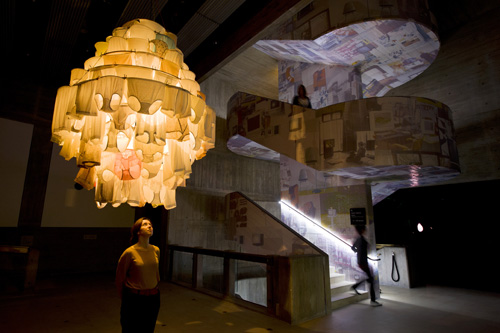 You cannot help but smile, both at the artist herself, whose wicked sense of humour captivates the audience, but also at her work. There is something comical, something cheeky, something reckless about it. Something childlike too? Her name, of course, is not her birth name, but one she adopted as a teenager in honour of Pippi Longstocking, the stripy-legged heroine of Astrid Lindgren’s children’s tales. But no, I wouldn’t call it childlike, maybe just simple and uncomplicated – as Rist herself says, she is using things around us and turning them into something beautiful. Others might call her work provocative, exaggerated, hysterical even. “But then,” as Adrian Searle concedes, “women are often accused of being hysterical when they tell unpalatable truths, or assert themselves.”[2]

There is, however, an undeniably Freudian aspect to Rist’s work. Elisabeth Bronfen[3] suggests that she epitomises female curiosity, and thus contravenes the concept of the drive to avert one’s gaze from the unpalatable. What Rist offers us is an exaggerated aversion of this aversion of the gaze. Her camera forces us to look at what we don’t really want to see, from genitalia and pubic hair (Red Bodily Love Letter, 1992/2007, and Blue Bodily Love Letter, 1992/1998) to menstruation (Blood Room, 1993/1998). But her goal is not to shock us: she is simply depicting the facts of life, expressing reality. And yet, at the same time, there is something about it which is not at all real, a hallucinatory quality, something dreamlike. Administering Eternity (2011), another new commission, is perhaps the best example of this. With white voile curtains floating in the breeze, scattered cushions handmade out of stuffed items of clothing, a soundtrack of bells, Tibetan monks, the wind, and a music box tune played back at half speed, we enter into a mesmeric, relaxing, fantasy world, surrounded by images from the most beautiful of dreams: flowers, plants, cats, mouths, skies, spirals, undergrowth, lambs… Visitors themselves become part of the experience, capturing and projecting images, as if they were emanating from their own fantasy. Rist has described her works as audiovisual poems, and there is something undeniably poetic about the atmosphere in this room. It would be possible to sit here for hours, day-dreaming, meditating, drifting through this psychedelic trance.

Less comfortable, however, is the earliest work on display, I’m Not The Girl Who Misses Much (1986). Made whilst she was still a student in Basel, this film features Rist dancing about half-naked, always out of focus, singing in a distorted voice (played back at the wrong speed). For this show, the video is being projected inside a larger construction, A Peak Into The West – A Look Into The East (or E-W) (1992/2011), shaped like the beam from a projector, into which visitors must insert their heads, an act which both reaffirms and simultaneously subverts the aggression of the gaze.

As Bronfen[4] concludes, Rist’s work is based upon a “self conscious disturbance of visual and cinematic expectations.” She is a master of video and film technology, whose haptic camera work enhances the viscerality of her subject matter. Whilst

classic film editing –  known as continuity editing – is all about a striving for coherence, and an attempt to make the audience forget the presence and mediation of the camera and the fact that they are watching a film, Rist deliberately reminds her viewers of this very thing. She incorporates jerky movements, out of focus shots, distorted sound, jagged lines, and colour filters. In Bronfen’s words, this is a display of her “radically disjunctive excess;” but Rist herself simply says: “I try to find some coherence, but I’m not there yet.” As she continues: “We change every day. We are only a biological meat machine. When we meet someone, we have a conversation which changes us. Tomorrow we are someone else.” And, indeed, I challenge any one of you to leave this exhibition the same person you were when you entered.

[4] Op cit. cf. also her essay in the catalogue to accompany the exhibition.

All works © the artist