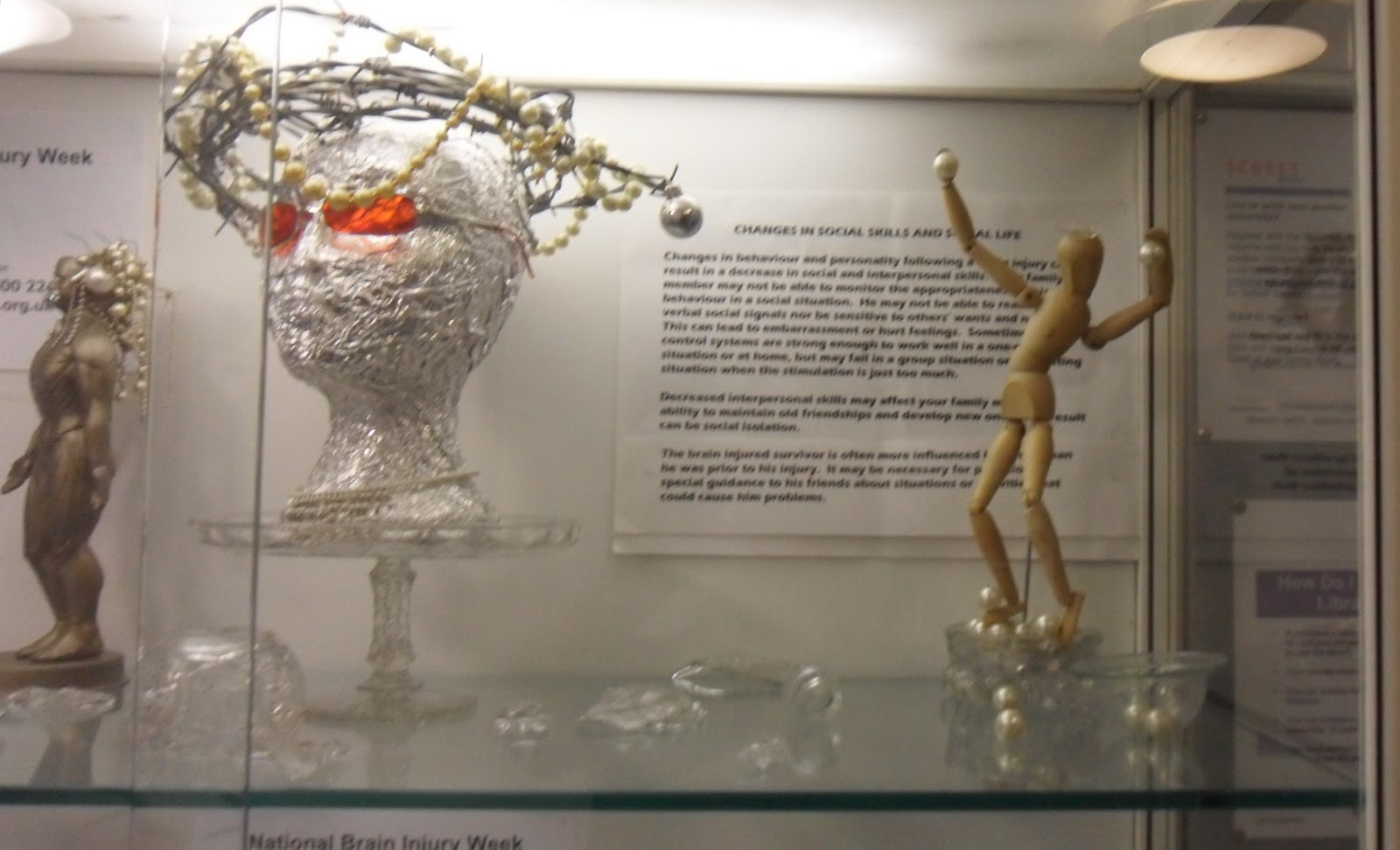 We often forget just how fragile and temporary human life actually is, and how quickly it can be taken from us, or altered, in the bat of an eyelid, never to be the same again. Xavier White’s display cabinet, a tribute to National Head Injury Week, and a personal memento mori – or is it rather a memento vitae? – is breathtakingly beautiful, and heart stoppingly honest, all at once. Three glass shelves filled with broken glass bottles and vases, some decorated with pearls, strewn over leaflets containing information about the effects of head injury on personality and emotions; anatomy models, of body and brain; artists’ models, contorted into impossible postures and nailed through the palms with pearls (religious suffering, passion, martyrdom. Punishment for sins. Whose? Our own? Is an accident ever an accident, or is everything controlled and served up accordingly by a greater master?); bicycle chains (a direct reference to White’s own accident); a foil wrapped milliner’s head, sporting rose-tinted shades (a reference to the oblivion in which so many of us exist?) and a barbed wire crown of thorns, itself also interwoven with pearls; a shattered mug, broken shards, upon which a crossword, with neurological word fragments (grasping at clues, rebuilding one’s knowledge, one’s vocabulary, one’s memories – a jigsaw of snapshots from a previous identity and life); a poem, Head Injury, by Roger McGough; and framing it all, around the outside of the case, the words: “Survivors: the guilt and arrogance… for sanity and sins discuss…” Guilt for what? For surviving when others didn’t? For the trouble inflicted on family and friends as they have to learn to live with this altered person, at once a shadow and an exaggeration of him whom they knew and loved before… Everywhere just fragments, shattered and broken pieces of a life – or lives – of relationships, of hopes, of dreams… Yet still beautiful, still valuable, still pearls – delicate and exposed, in need of protection, but something which will grow again, potentials… What is perfection anyhow? Something unadulterated and raw? Truth? Innocence? Or something which has grown and developed? The result of a process? Of aspiration? Only later revealed, and always then at risk? A badge, tilted downwards, with the word “naked”: like the pearls, stripped bare. A mere object for the medical profession. A green glass bell. Ringing? Inside one’s head. Inside or out? If it’s broken, surely it’s both – there can be no distinction. Constant sound. Thoughts which won’t subside. The longing for silence, for peace. Memories being obliterated, buried, confused… And at the very bottom, a blue tinted glass star. In tact. Is this hope? Something which remains unbroken? Which cannot be extinguished? Something which shines on. Light. Love. Life. Temporary and fleeting, yet, once the individual is removed, eternal.