EJ Major, an artist and lecturer at Middlesex University, who graduated with an MFA in Fine Art from Goldsmiths in 2009, this year beat nearly 1000 international photographers to win the new Salon Photo Prize, organised by Matt Roberts Arts, and judged, amongst others, by Simon Baker (Curator of Photography at Tate) and Stefanie Braun (Curator at the Photographers’ Gallery). Alongside the financial reward of £1000, she also won the opportunity for a solo show, held at Matt Roberts Arts, in the trendy East London arts hub of Vyner Street, this month.

Major’s photographic works, which include both digital and analogue technologies, are rooted in questions of identity and performance: how we both construct ourselves and are simultaneously constructed by the people, things, and events around us. Her works bear reference to historical and contemporary events, intertwining the two, and constructing a new narrative. The result is layered, remaining both a document to the past, but also opening up a conceptual space where questions of personal motive and relevance become pertinent, should the viewer wish to venture down this route. Major usually incorporates text as well as image, and claims to be “interested in how these two forms of representation enforce and displace meaning.”

This solo show consists of two main bodies of work: the eponymous Shoulder to Shoulder (2009-2011), shown here for the first time, filling the walls of the main gallery space, and Marie Claire RIP (2004-2007), already widely toured, which hangs in the back room. This earlier work, which consists of 12 portraits, hung in two rows of six, is based on a set of police mug shots of an anonymous female heroin addict, taken over a 14 year period, which appeared in an article in Marie Claire magazine in 2002. The article revealed that the woman was found dead not long after the final picture was taken, and the images therefore formed part of an anti heroin campaign. Major saw the original photos in a magazine at a friend’s house, and, weeks later, still haunted by the images in her head, asked her friend for the magazine, scanned them in to her computer, and began working on them. This series constitutes a restaging, with Major herself taking on the triple role of model, photographer, and retoucher – an experience she describes with hindsight as “very intense and quite isolating”[1]. The piece grew out of a desire to memorialise the unnamed woman, to give her a name, and also, through the addition of small textual annotations (“did not cry”, “do not care”, “hid in fear”, “i did it”, etc.) at the foot of each image, to initiate a narrative, reminding the viewer that no person’s life can be condensed to a set of just 12 images. By playing the role herself, Major challenges the authenticity of the photographic portrait and the role of acting in the creation of any individual identity. She is also keen to point out that there is, in her work, no direct reference to heroin, since, for her, that’s not really what it’s about: the story is certainly one of the individual’s personal demise, but also that of every (wo-)man’s.

Shoulder to Shoulderlikewise tells the story of both the individual and society at large. Really, it falls into two parts, linked intrinsically through their historical reference. Three large colour pieces comprise Seriously Damaged By Attack, based on the attack on Velázquez’s Rokeby Venus, on 10 March 1914, by militant suffragette Mary Richardson. Armed with an axe, fixed inside her jacket sleeve and held in place by a chain of safety pins, Canadian born Richardson entered London’s National Gallery unnoticed, and, after hours of hesitation, quite literally let rip, slashing the only surviving female nude by the leading artist of the Spanish Golden Age a total of seven times. Although the attack had been being planned for some time, it is said to have been triggered by the arrest, the previous day, of fellow suffragette Emmeline Pankhurst. Richardson, who was sentenced to the maximum term of six months’ imprisonment for the destruction of an artwork, later explained: “Values were stressed from a financial point of view and not the human. I felt I must make my protest from the financial point of view, therefore, as well as letting it be seen as a symbolic act. I had to draw the parallel between the public’s indifference to Mrs. Pankhurst’s slow destruction and the destruction of some financially valuable object.” She further added, in a statement to the Women’s Social and Political Union: “I have tried to destroy the picture of the most beautiful woman in mythological history as a protest against the Government for destroying Mrs. Pankhurst, who is the most beautiful character in modern history.”

In Major’s rendering of events, we see first Venus Vanitas – part re-enactment, part photographic composite – a modern reworking of the painting itself, with Major as both Venus and Cupid, and the reflection in the mirror posed by her mother – a stark comment on the demands of ideal beauty in contemporary society as youthful, botoxed, and wrinkle-free. The second photograph shows Major in the role of Richardson, standing before the genuine Velázquez, axe in hand. The final of the three images is of the aftermath: a slashed black and white news image of the damaged masterpiece standing below a framed portrait of Richardson, all set against satin drapes, in the colours of the Suffragette flag (purple, white and green), with a mysterious and disturbing figure in the foreground. Mummified in white satin, with only her hands protruding above her head, she is squeezing a cable release bulb. This is the most recent work Major has made, and she confesses to not yet fully knowing what it means: “The longer I live with the works once made, the clearer they become. The desire to make work, for me at least, comes of some enquiry fizzing away in my mind. It is only when I cannot answer or even articulate the question that I resort to making work. As the work gets made, the fizzing (usually) begins to abate or at least move elsewhere, and I begin to come to some understanding of what I’ve been fizzing about.”[2] My own response on seeing this image was to interpret the bulb as a detonator, resonant perhaps of modern day militancy (aka terrorism?) and those prepared to give their lives for a cause in which they truly believe. Major’s desire that viewers should seek their own readings and relevancies is therefore clearly effective.

The rest of Shoulder to Shoulder is made up of a series of black and white photos – four small landscape shots, taken from archives (some manipulated, some not), and three larger contact sheets – all relating to the theme of suffrage and protest, something in which Major has become increasingly interested over the past few years. As she explains on her website[3]: “The Suffragette movement provides a historical context for the performance and investigation of protest today, a fixed vantage point from which to explore the myriad issues at play in contemporary society.” The women in prison uniforms clearly evoke the fate of Richardson and her cohorts, and the placard calling for “deeds not words” echoes their radical approach, but through their deliberate coalescence of these early 20th century protests with those of more recent years, concerning such issues as climate change and welfare cuts, the photographs’ complex narratives place today’s protesters – Major’s audience, and Major herself, who appears in most of the shots, and attended the climate change march, as pictured, in a full length Suffragette prison uniform, borrowed from National Theatre Costume Hire company – in amongst their ancestors, both lending weight to the contemporary issues, but also revitalising old battles, and perhaps hinting that the struggle for gender equality is not yet won.

Major’s use of series of stills is a longstanding feature of her work and stems from when she was working with films, as, for example, in Try To Do Things We Can All Understand (2003-2008), freezing frames in an attempt to see whether she could apply Barthes’ notion of the punctum (that which is purely personal and dependent on each individual viewer, in contrast to the symbolic meaning of an image, or its studium) to the moving image. My impression, on viewing these works, however, is that she achieves a strong and powerful blurring of the two: as later generations of feminists went on to note, the personal is political. Our identity is formed of both our collective and individual past and present. We can escape from neither. The lives of others impact inescapably on our own. 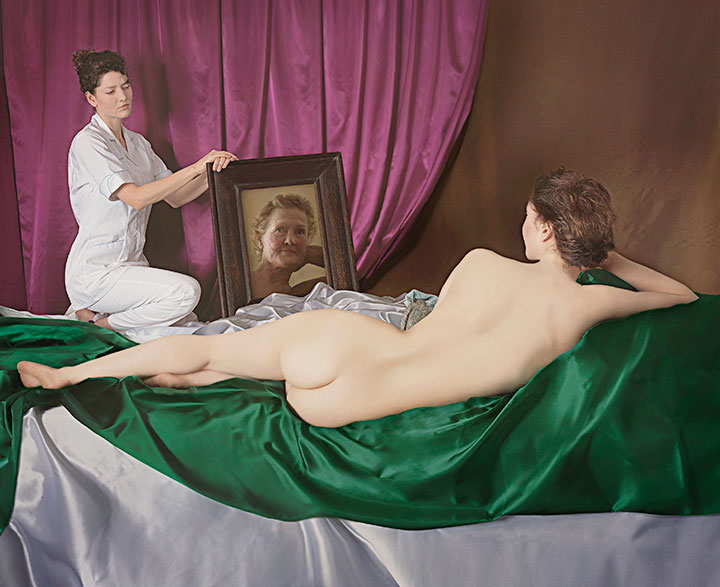