Ellen Bell is an artist who works with images and text, carefully selecting, cutting out, pinning and pasting words from dictionaries, novels and plays in a most painstakingly precise manner. She is represented by Four Square Fine Arts, and her recent exhibition, held offsite at the Gallery, Redchurch Street, was entitled Camera Obscura and Other Stories (24 – 29 May 2011). Anna McNay met her for a chat. 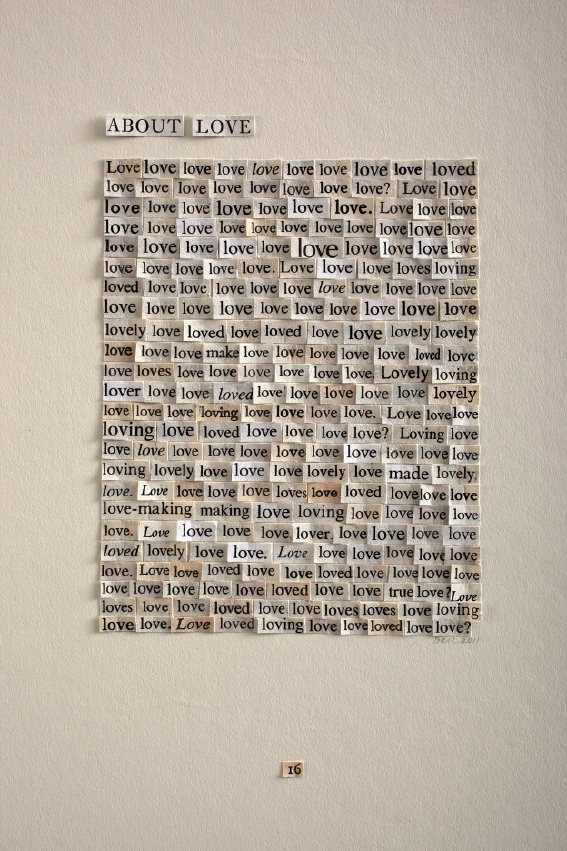 You talk in your artist statement of the limitations of language as a method of expressing deep and difficult feelings, and yet your work consists primarily of language and words, and, as you also say in your statement, is more akin to writing than drawing. Why, if you feel language is limited, do you work with words, rather than turning to colour or form or some other more visual form of artistic expression?

Because I’m trying to push those limits. Because I’m trying to find a way of making it work, but also maybe reflecting the fact that it is limited. When I use a word repeatedly, I’m making the word work harder. By saying it over and over again, it loses its initial meaning, it becomes something else, it becomes a sound. It’s almost as if the words are the end product of what we’re feeling. It begins as an energy, a feeling, which is enormous, and the word pares it down to something that is quite limiting.

My second degree was in illustration, so I do draw as well, and I love drawing. But I’ve always been looking for different ways of expressing myself, and language is really significant. This way of working fits with how I am, balancing between writer and artist.

Which comes first: the image or the words?

I suppose it varies. Sometimes it’s the title; sometimes it’s an emotion I want to express; sometimes I find a photograph that really moves me. So I wouldn’t say that it was one thing. I think the theme is always the same though, it’s about intimacy; it’s about how people communicate.

You seem to have progressed from the single dictionary entries of your earlier works to using strings of words taken from romance novels – can you say a bit about this development? Was it a deliberate progression?

Yeah, it was much more about conversation. Working with play texts, in particular, conversation is really important, and I’ll often use some of the stage directions as well. It’s almost like fixing it in a particular time and space – much more than you would do with a dictionary piece.

Even more recent works, the Night Murmurs series, seem to be moving on still further, from the figurative to the abstract. You’ve also introduced colour: was that a challenge?

It was initially, because I’ve always wanted to maintain this kind of quietness, order, peace, and serenity, and the colours ask something else of you. I really feel that they work, but I think they will remain limited.

Yes, exactly. But they’re also quite symbolic, the red, the black, and the white: sexuality, death, life…

What artists have you been influenced or inspired by?

Well, Tracey Emin… I’ve struggled with her work. I think she’s much more of a blood on canvas person than I am, but I love her work. I was listening to her recently on radio 4, and I really like the way that she doesn’t make excuses for what she does. I think she had to pave the way. I know that people have come before her, but I think what she is doing is really difficult. She has really exposed herself, and she got hammered for it, and I just think she’s really brave.

Susan Hiller is also someone that I respond to, particularly because she doesn’t stay with one way of working, and I really like that. That lovely piece where she’s done the Jewish signs around Berlin – it’s stunning. But it’s a very intellectual way of working. I’m sure there’s emotion there, but it’s not so clear.

Do you consider your work particularly feminine, or do you see that as a bit naïve and limiting?

I do find that limiting. I suppose people assume it’s made by a woman because it’s so detailed. When I made clothes, it was always seen as a woman’s work, and that frustrated me because I didn’t want just to speak to women. I didn’t want to be limited. Language, I think, originally was a very male concept. And that’s one of the reasons why I started to use dictionaries in particular because they’ve always been published by men, so I was entering that world.

Do you ever end up really hating a piece when you’re making it?

I can do, when I feel uncertain about it. But that’s just inner judgment. It sounds a bit fey, but, in a way, the work becomes something other than me. So I’m comfortable with it when there’s a bit of space between us. You get into a meditative state above judgment and you let the work breathe, let it be, forget the judgment. I make very careful boxes and keep the pieces in them. I put the work away and don’t look at it, and stash it under the bed before the inner judgment comes out – usually mid afternoon! I only ever work on one piece at a time because the story needs to be told and I get really involved and need to see it through. Other ideas might get noted down in the sketchbook but I will never work on more than one piece at a time.

So your process of choosing the words, going through the books, cutting them out, and putting them into your box –do you have to collect everything you want prior to starting on the actual work itself?

I try to, but I never know whether I’m going to find all that I need. If I did it midway, it might change the piece, but sometimes that has to happen. If there aren’t enough ‘I love you’s in a book, you’ve got to resolve it some other way…

So where you’ve got works that are primarily made up of one word, but you’ve got the odd interloper, do you know beforehand what those words are going to be?

No, that happens as I’m writing it… making it… And that can be affected by an audio book or a radio programme that I’m listening to. Sometimes serendipitous stuff happens. They [the interloping words] are really meant to knock you off a bit. So you get very comfortable thinking ‘Oh yeah, I’ve got this’, and then it sends you off on a tangent. It’s a little bit of darkness, or a little bit of discomfort in there.

So you haven’t found those words in advance?

No. I will go and seek them because something’s come in and I feel a need to respond to it. The word ‘love’, for example, you think it says all we need to say, yet putting another word in there with it changes it. It stretches it and gives it a different context. I suppose that’s basically what I’m trying to do: to question and challenge meaning as it has been defined and pinned down.

Is there anything you still want to try out? What’s next for you?

With my current residency with Relate [marriage counselling] I want to make a film. I’m conscious that there’s an absence of sound in my work, and that’s coming. It’s always about moving the practice and challenging myself. It’s hard to say what’s coming, but I tend not to go backwards.

Originally published in the July 2011 issue of Art Selector: http://www.artselector.com/selected/ellen-bell